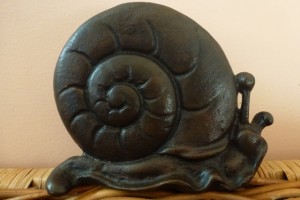 The best sort of snail

Slugs and snails are the bane of my (horticultural) life.  I seem to have a large and seemingly endless population of the giant Tiger Slugs that absolutely ravage the garden.  I can’t grow any leafy plants that die back over the winter because the slugs will get them the moment they try to poke their new leaves up through the soil in the spring.  I can sometimes grow vegetables from seed if I carpet the surrounding soil with slug pellets.

I have tried all manner of methods of controlling them.  Deterrent methods are a waste of time because they just go and eat something else instead.  Apparently some people have great success with sprinkling egg shells or other sharp/scratchy material around the plants – at my place the slugs blatantly cruise across the top and devour their prize.  You can also try putting out things like citrus halves or upturned pots that they crawl into and then you throw them away – but honestly who has the time to spend half the day putting out masses of refuges and the other half picking them up again to throw away?

I had a bit more luck using beer baits: bury a jar or other deep sided container to the rim in the soil and part fill it with beer.  If it looks like rain you can cover it with a lid propped open with a stick to stop the beer getting diluted.  This certainly attracts masses of slugs and snails but unless you are going to have the time (or inclination) to empty and refill the traps every couple of days be warned that you get a disgusting smelly slimy mess of rotting slugs and stale beer that makes you gag when you go anywhere near it! 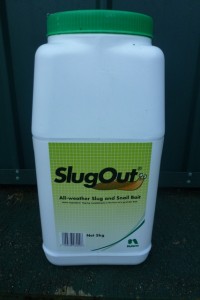 Most of the slug pellets you can buy in garden centres just dissolve and are useless with any hint of rain (which seems to be most of the time in Auckland).  On the advice of a garden advisor I know, I now purchase industrial strength all weather slug pellets called SlugOut that you get from Horticultural Supplies Agents in 5 or 10kg packs.  Last time I got them they told me that next time I should talk to them about getting another product with a different active ingredient to alternate with SlugOut to make sure they don’t build up resistance.  SlugOut is effective – there is always lots of evidence of that they next day – but I still only ever seem to be able to dent the population temporarily, which is important when I’ve just planted out some new seedlings to give them enough chance to get established.

There is one hands-on slug/snail control method that I do use regularly but mostly because it gives me a great sense of satisfaction and revenge for all the damage they cause.  At night after it has been raining the slugs and snails come out in great force over the plaster walls and paths so I go out with a torch and a large salt shaker: sprinkling them with salt is certain death.  Slugs are easy but you have to sneak up on the snails to get them before they retreat into their shells. I hope I don’t get arrested on a-salt charges!?!

The birds seem to like the salted snacks too!

Note that too much salt can damage the garden so it is best to just salt the slugs that are on the hard surfaces.