For some reason I am wide awake at 4.30am and as there is a wakeup call scheduled for 5.00am, I decide to have a shower and do some much needed laundry. Unfortunately the shower is freezing cold but I decide that being clean is worth it. 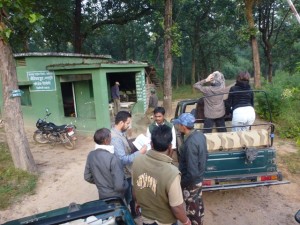 Filling in forms in triplicate

We start with a cup of marsala chai before heading out in our safari jeeps to the park entrance where our passports are checked, forms filled out in triplicate, and the guards make sure we are sitting in our allocated jeeps.

Bandhavgarh is one of several National Parks set up by Project Tiger in the 1970s. There are about 1700 tigers in Bandhavgarh park now compared with 40,000 in the 1960s. The drastic decline is due to poachers and some tigers are killed by villagers after they kill their cattle. Interestingly, although the government has money to improve the roads, the forest service doesn’t want to do that because that will mean more people and more commercialisation and the tigers will suffer more. Only 50 vehicles are allowed in the park at each safari time (early morning and late afternoon). 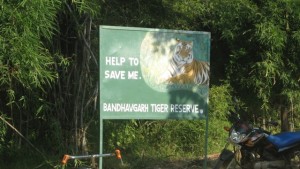 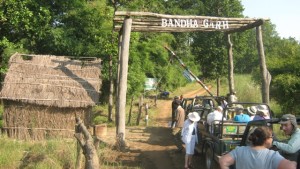 It is dawn and there is a soft haze hanging over the park. We see all 3 types of deer in the park: spotted, samba and barking. We even see some huge antlered samba males that are magnificent to see in their natural environment. We see fresh tiger tracks (male and female) and follow the tracks in hope of reward. But we have to make do with being entertained by troupes of monkeys – hanuman langurs – who are leaping and crashing in the trees supervised by a very distinguished-looking male. The spider webs are huge and are hanging everywhere, glistening in the morning dew. The giant woodsman spiders in their centres are huge too and we swear they are getting bigger as we head deeper into the park – we joke about finding a jeep caught in a web. Our naturalist guide shows us the tiny male spider on the edge (he gets eaten after mating). We see leopard tracks and all sorts of birds including peacocks, parakeets, Indian roller bird (with brilliant blue feathers when it flies), kingfisher and a changeable (or crested) hawk eagle devouring its prey; but unfortunately no tigers. 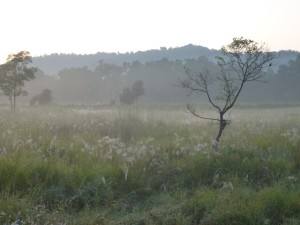 A misty morning in the park 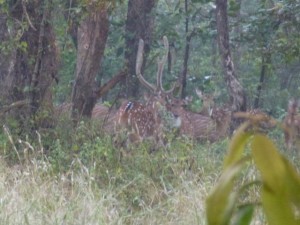 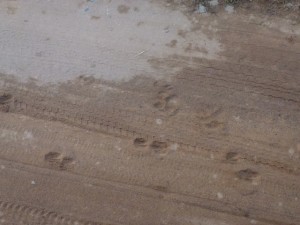 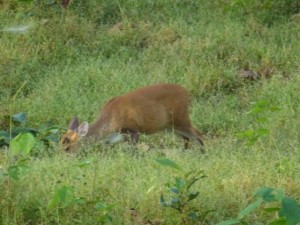 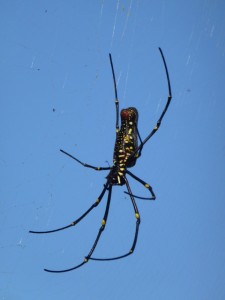 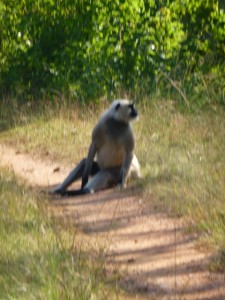 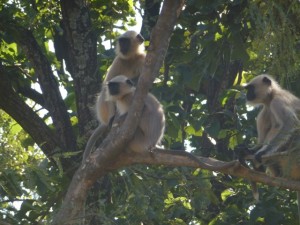 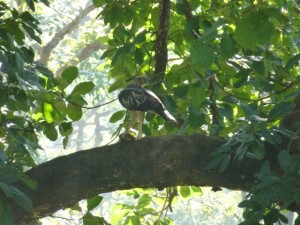 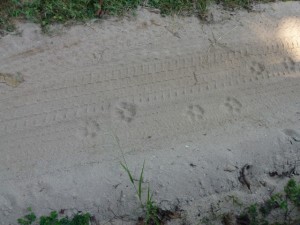 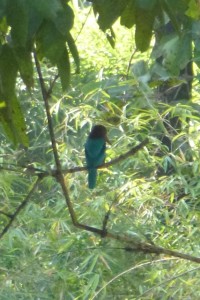 We head back to our lodge for breakfast and a snooze. In the afternoon we head out again for another circuit or two. Bhanu had spent 6 years here as a naturalist before he had to go home to help with family matters. He has been away 2 years and is keen to get back. His face lights up when he talks about tigers and the park. I am in a jeep with him for the 2nd safari and it is great to share his knowledge. When we arrive at the park after lunch there is a group of 20-30 naturalists waiting for him – word had spread fast that Bhanu was back and they had all come to great him. It was lovely to see how well regarded he is.
We have no better luck this afternoon – apparently it is the first day that no tigers at all have been seen. The park is closed for 3 months during the monsoon season and has only just reopened. It takes a while for the animals to get used to the vehicles again. Also the park is lush and green with plenty of water. Later in the year, animals need to come more regularly to the waterholes and there is less vegetation for them to hide in. Park rules about where, when and how you go have changed recently which also makes it harder for us to be able to see them e.g. we have to leave the park by 5.30 which means leaving our zones by 5.00 when the tigers have really only just started moving about.
But it is just beautiful driving around the park listening to the birds and seeing the other wildlife. It is a different jungle from what I am used to – it is 70% Sal trees plus bamboo and a few others like Indian Ebony. Everything is lush and flowering after the rains and we have a lovely view to the Bandhavgarh range (that the park is named after) looking across fields of something like pampas grass – glowing white. 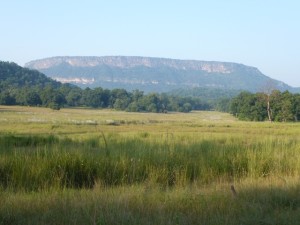 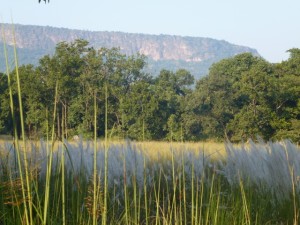 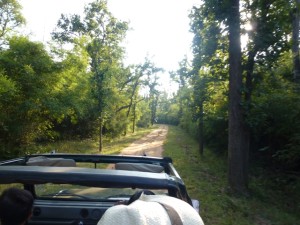 Driving through the jungle 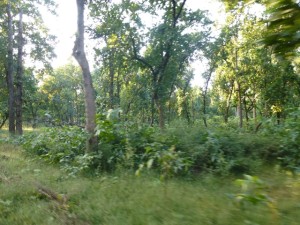 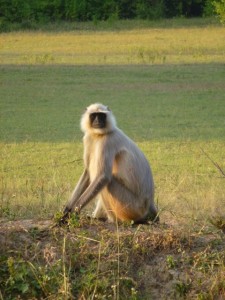 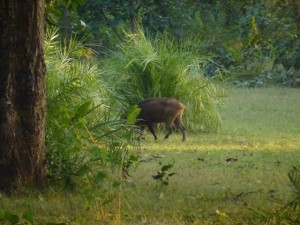 That evening we are again picked up in jeeps to go to a nearby lodge that was set up by Kailash Sankhala the naturalist who first set up Project Tiger in the 1970s by presenting 2 tiger cubs to Indira Ghandi. It is a magnificent lodge with lots of books and photos of wildlife. We sit outside around the firepit for drinks. It is Lisa’s birthday and we arranged a card (postcard of a tiger) and found a ‘tiger print’ scarf for her to make up for not seeing a real tiger. Dinner is a delicious buffet in the grand dining room. 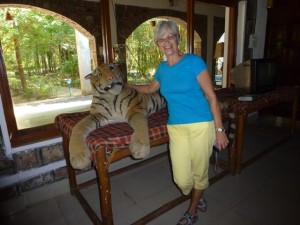 The only tiger we saw 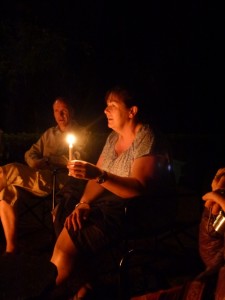 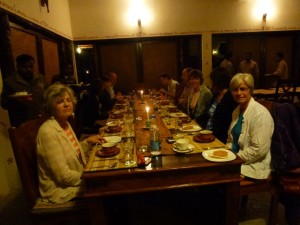 Dinner at the lodge

We had all been keen for another chance of seeing a tiger and jumped at the chance of an optional activity of riding an elephant in the park even if it did mean another 5.30am start. But unfortunately they are doing a tiger census and the elephants are not allowed to go in. So we look forward to a sleep-in instead.
In the jeeps I got to sit in the front with the drivers both ways and heard their stories. One was born in the park village and loved both the tigers and the tourists. The other driver had come from another park – his cousin knows Bhanu well and Bhanu had got him in contact with the lodge where he is now a naturalist. 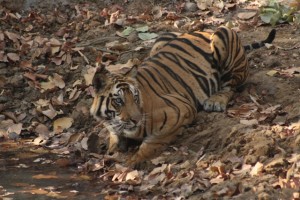 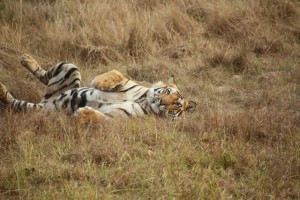