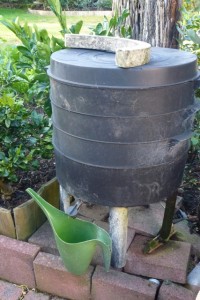 I have had a worm farm for the best part of 20 years and it is wonderful for all the kitchen fruit and veggie scraps.  You can also put in things like coffee grounds, egg shells, and paper towels.

Worms don’t like onions or citrus – but mine have happily tolerated a small amount (and sometimes a bit more when I forget).  They don’t like to be too hot or too cold so finding a sheltered spot for them is important.  I know someone who used to bring them inside into the garage over winter so that they didn’t get too cold (and this was north of Auckland!).  To me that is going too far – it’s a bit like having thousands of pets!

But I do give my worms a bit of extra pampering over the winter.  I had an old coir doormat once that had seen better days and was going to throw it out when I wondered whether the worms would like it.  I cut it in half and put a piece over the top of the scraps thinking that if nothing else it might give them a bit of insulation.  It worked a treat! 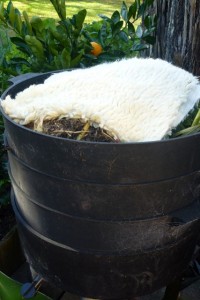 This year I had an old sheepskin under-blanket from the bed that was getting a bit past it, so I’ve cut that into pieces and am gradually putting that into the worm farm. 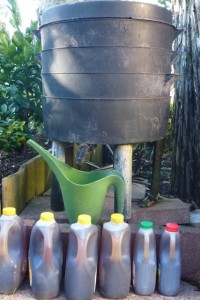 But basically the worms appear to be extremely hardy and have regularly survived total neglect when I have travelled overseas for a month at a time (at various different times of the year). They sometimes get over-run with other creatures like small flies and white bugs – this means that it has become too acidic.  You can fix this fairly easily by applying some dolomite lime to neutralise the pH.

One of the great things about worm farms is the ‘worm juice’, ‘worm tea’ or even ‘worm pee’ as I’ve also heard it called. This is a wonderful liquid fertiliser for indoor and outdoor plants and can be harvested regularly.  I save plastic milk bottle containers for the worm juice and often share these with friends.

It does pay to check the tap if nothing is coming out: for the whole of my first year I kept turning the tap and nothing was coming out.  I didn’t know any better and just assumed that it took a long time to build up.  Eventually I discovered that a snail had lodged itself on the inside of the tap and was blocking the hole! There was plenty of liquid backed up inside.

You can add extra water to dissolve more of the solids for more fertiliser if required.  The fertiliser works very well but don’t overdo it particularly on plants that you want to produce anything other than leaves.  I was very zealous with fertilising my veggie garden a few years back and produced some gigantic triffid-like broccoli that just kept growing more and more leaf and getting taller and taller but they never did produce any broccoli.

Generally I just keep loading up the kitchen scraps until all the trays are full and in October each year as I prepare the veggie garden for my main planting I spread the solids on the garden (keeping the top tray separate that has most of the worms in it).  The worms are a special kind of worm that won’t survive in the garden.  Invariably there will be a few that are in the lower trays and end up in the garden but not too many.  I make sure I wear my oldest clothes and my gumboots as it is a really messy but quite fun activity. I tip the trays out and clean them out with a hose – this sprays ‘fertiliser’ everywhere and makes the piles in the garden very goopy.  But I just spread them around with a spade, give it a good watering in and then sprinkle dry compost over the top so that it doesn’t look too disgusting – and the plants love it!