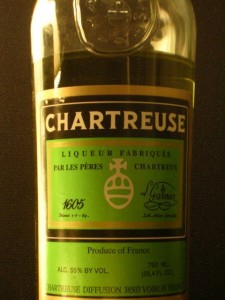 I attended a function recently with the most innovative invitation I had ever received: a courier pack arrived with a little white bag tied up with a black bow, inside was a miniature bottle of Green Chartreuse and a challenge to create my own Chartreuse cocktail.  I had to provide a recipe, a name and decide what sort of glass it should be served in.  A mixologist would be present on the night to judge the most innovative recipe.

Well it certainly was a challenge.  Firstly I had no idea what Chartreuse tasted like nor what cocktails might already exist using it.  And how do you start to create a cocktail?

Thankfully I had just been enjoying my home-made Limoncello when the invitation arrived, so my starting point was ‘I wonder if I could put Limoncello and Chartreuse together?’ and ‘thank goodness for Google’.

Chartreuse is a liqueur made by Carthusian Monks, using 130 herbs, plants and flowers steeped in alcohol.  (Surprisingly enough it has a ‘herbal’ flavour.) They have been making it since 1737 according to the instructions set out in a secret manuscript given to them in 1605.  It is named after their Grande Chartreuse monastery, located in the Chartreuse Mountains in France.

There didn’t appear to be any other cocktail recipes using Chartreuse and Limoncello together, and gin seemed to be used often with Chartreuse.  So not knowing what quantities of anything to use and only having one little bottle to experiment with, I took a liqueur glass and put in tiny, roughly equal parts of Chartreuse, Limoncello and gin.  Because Limoncello can be quite sweet I added a squeeze of lemon juice.  And it tasted delicious – just like Lemon Sherbet.  Then I did the same again and put it in a bigger glass and topped it up with soda water – and I still liked it.  The next night I made sure that I could repeat this and that the measures were equal.  Just as well I still liked it because that was the end of the bottle.  So that became my recipe.  There was another (completely different) cocktail already with the name Sherbet Fizz so I had to make the name a bit more specific. 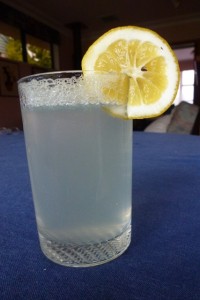 I didn’t win the competition but my cocktail was very similar to the cocktail “The Innovator” chosen for the event which used Agave Nectar instead of the Limoncello and mineral water instead of soda water.  So I felt that I had done a pretty good job of my first ever cocktail invention.  Even more importantly, I liked it and I hope that you might too (if you just happen to have a bottle of Green Chartreuse).