I don’t dislike cats but I really dislike what they do in the garden! 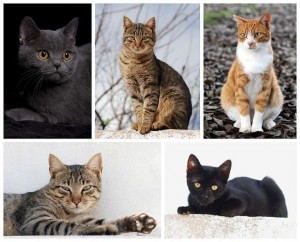 I don’t have a cat myself (I developed an allergy to them) but I currently have about 8 different cats all seeking to dominate my garden. They prowl around the fence tops – fighting for territory. They try to mark out their patch by spraying everywhere and some of my plants that are in  high transit areas have dead patches (or have died completely) because they have been sprayed so often.  One had a nasty habit of sleeping on the warm bonnet of my car and spraying on the windscreen and into the vents to stake out his patch – I was not impressed! At night they fight with plenty of hissing and yowling to wake the neighbourhood.  They flatten all the plants in areas that have been designated for sunbathing and dig up others to leave their unwelcome toilet deposits. 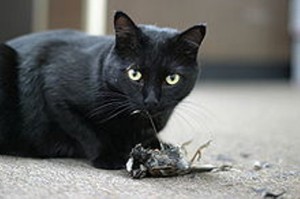 And they stalk the birds that I have been feeding, leaving little piles of feathers on the lawn.

Most of the cats have got the message that I am top cat in this garden and run away when they see me but it certainly doesn’t stop them trying to take over when I’m not there.  I have tried a whole range of different methods to deter them – mostly with temporary success.  One cat in particular will regularly come and spray my front door when I have temporarily deterred him from a favoured spot.

Chasing them, making noise and clapping has helped to keep them out when I’m there.  I did manage to spray one with a hose and didn’t see him for some months – but he is back again. 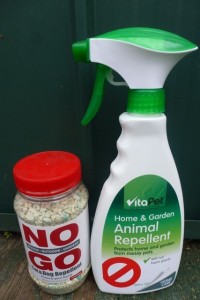 Animal repellent sprays work quite well but require re-spraying every day.  Apparently after 3 days cats will change their habits, so I often spray tops of fences where they regularly come over, around my veggie garden and any other obvious places – particularly my car!  It does work for a while but you have to keep up with it or they’ll be back.

Any freshly dug piece of ground seems to be a magnet for toilet activities, so I often cover the patch with some netting until I’ve planted there.  But then they will come and dig up the plants anyway – using repellent granules can help.  I use bark mulch to keep down the weeds and mostly this keeps the cats from digging in the soil as well – but just recently one has started leaving me nasty surprises in the bark.

I may have to resort to more drastic measures.  Some people have success by using some chicken skin to lure cats into a cage trap and then dousing them in water before releasing them.  You need to be around to avoid leaving them in the trap too long though.