Now that avocados are down to less than $1, I don’t feel so bad that I didn’t go ahead with trying to grow them (again) in my garden.  Avocados are the ultimate superfood and so delicious in so many ways.  I loved the romantic idea of being able to go out into the garden at any time and pick all the avocados I need.  But I’d seen commercial avocado orchards and knew that the trees can be absolutely enormous – certainly not ideal for a suburban backyard – and they can often take years to produce fruit.

When I first started to think about all the different fruit trees that I’d like to have growing in my backyard, I asked (somewhat sceptically) at the local garden centre whether it was even realistic to think about growing an avocado tree and keeping it pruned (after all, I was pruning my Pittosporums regularly anyway).  And the surprising answer was YES – she told me to look on the internet for Avopro – a NZ company set up because they had asked the same question and worked out that they could do it using a High Density Planting method.

The biggest problem with avocados is that they produce masses of flowers but have very little fruit set.  There are male and female parts in the same flower but the female part opens first for a couple of hours and then closes and then the male part opens for a couple of hours.  So they clearly can’t pollinate themselves and if the flower isn’t pollinated it will die and not produce any fruit.  To make it more complicated, it also turns out that there are 2 different sorts of flowering types in avocado:

In the High Density Planting method, they have discovered that if you plant 4 trees (2 type A and 2 type B) very closely together, either in a circle 0.5-2.0m in diameter or all in a row just 1m apart, you will maximise the opportunity for the pollen from one type of flower to find the female parts of the other flowering type and therefore maximising your chances of a great crop of fruit. 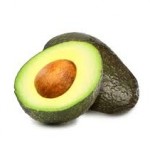 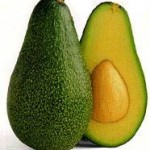 Because you should be getting great crops (and reportedly much sooner – 1.5 to 2 years after planting), you should also be happy to keep the trees pruned down to manageable heights.  But you will have to be careful how you do this because fruit only form on the previous year’s wood – so perhaps prune one half of the tree in alternating years.

I did invest and bought my different types of avocados and planted them in a 2m circle and for the first year they grew wonderfully and I began to get excited about being able to pick my own avocados.  But then sadly my neighbours decided that they would spray some ivy that had grown all through a tree on their side of the boundary – and in doing so they managed to kill all of the plants in quite a wide radius on my side of the fence  as well.  I was so disappointed!  But by that stage I was also looking to grow as many different types of fruit and vegetables as I could and rather than invest again in the relatively expensive trees I decided to grow berryfruit instead in that space.  I do question my decision every now and then but console myself that my garden just isn’t big enough to grow everything.