In an earlier post I talked about Attracting Bees to your Garden and all the different plants that had bee-friendly flowers.  I wanted to have lots of bees to help pollinate my fruits and vegetables to maximise production from my garden.  Bees are absolutely essential for our gardens but are declining in numbers due to Varroa mite and various diseases. But I started to think that even if I planted all these bee-friendly flowers how could I be sure that there would be bees to enjoy them?

I knew that orchardists often rented beehives at critical times of year but I wondered whether anyone supplied them to gardeners.  So I did some research on-line and found various people offering beehive rental, and after a couple of phone calls found someone who supplies urban Auckland: Angus Willison of Over the Hill.

Over the Hill rents out fully maintained beehives.  You pay an annual fee and for that you get a hive, the bees are fully looked after and regularly maintained, and you get a few kilos of honey as well.  They take care of everything.  You just need to provide a nice sunny spot particularly where the bees get some morning sun.

My bees arrived in a single layer hive, but after just a few weeks a second layer appeared.  I have spent quite a bit of time just watching my bees flying happily in and out of their new home.  They really are ‘busy little bees’ – I can appreciate that saying much more now.  I was a little concerned about getting stung but having grovelled around burying irrigation pipe in the garden just in front of the hive and had the bees just fly around me, I am feeling much happier.  They die if they sting you so they will only do that as a last resort.  I was also told that if bees swarm around you, a spray of toilet air freshener would neutralise their pheromones and stop the attack.  I did toy with the idea of keeping a can in the garden shed but haven’t done that yet. 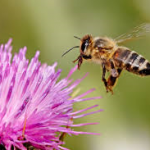 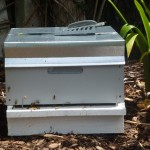 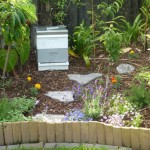