I use the good old Edmonds Cookbook recipe for this delicious tomato relish and am always amazed at how many ‘rave reviews’ and recipe requests I get.  This is the cookbook owned by just about every New Zealander and covers a good range of basic recipes for all occasions.  It is regularly updated though so perhaps not all recipes stand the test of time.  My cookbook was printed in 1983 but the 100th year edition was published in 2008.

We wait and wait for the tomato season to begin, eagerly watching the green fruit and willing them to ripen.  And when they finally do, it is not long before the glut of tomatoes starts and we then start looking for all the different recipes we can find using tomatoes.  Thankfully tomatoes are easy to freeze – you just wash and dry them and put them in the freezer whole.  That way you can transfer some of the summer preserving madness until a quieter time of year.

This recipe can easily be made with fresh or frozen tomatoes.  The tomatoes need to be peeled first.  To do this, plunge them whole into boiling water for about a minute and the skin will split and then it is easy to peel it off.  This is even easier if your tomatoes are frozen: just plunge them still frozen into the boiling water.  You may want to wear rubber gloves to stop your fingers freezing while you hold and peel them though.  It is better to use a saucepan of boiling water that you can keep boiling otherwise you can only do a few tomatoes at a time before needing to replace the boiling water. 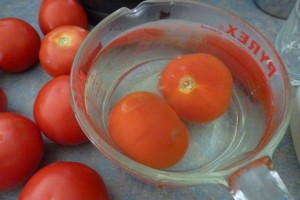 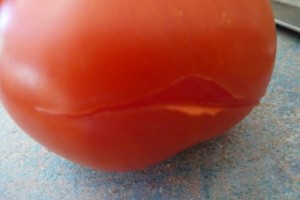 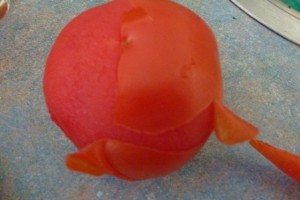 The recipe says to use 12 large tomatoes and 4 large onions but no indication of weight, so how large is large?  To be honest it probably doesn’t matter because you simply cover whatever quantity you have with vinegar and most of the other ingredients are flavouring.  I generally use whatever tomatoes I have at the time and roughly guestimate the equivalent about 12 big ones.  If I am using some cherry tomatoes I don’t try to peel them.  I will often just add whatever onions I have (sometimes freshly picked from the garden that day). Sometimes it makes 6 jars, other times it makes 12 jars but this can also depend on how heavily you simmer it as well. 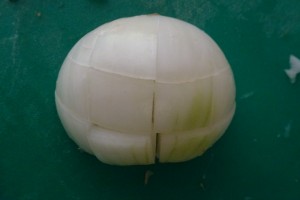 Cut diagonally across and then down the onion without going right through. Then cut across as usual and you will get good sized pieces.

Vinegar (have at least 1 litre available)

Cut tomatoes and onions into four or more pieces (I find it gives a better result if I cut them much smaller).  When cutting the onion, I find it easier to make several cuts diagonally into and then down without going right through the onion, and then slice across it – it gives good size pieces.  Sprinkle with salt in a bowl and leave overnight (covered with cling film). 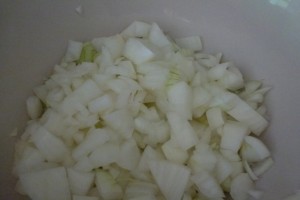 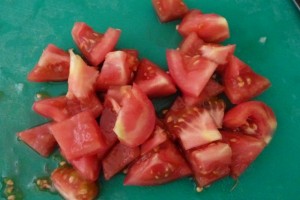 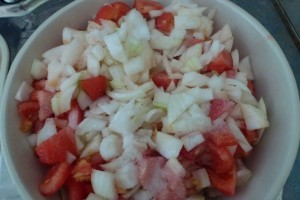 Next day, pour off liquid and put tomato and onion mixture into a preserving pan with sugar and chillies (if using).  Add enough vinegar to cover.  Bring to the boil and simmer for 1 1/2 hours. 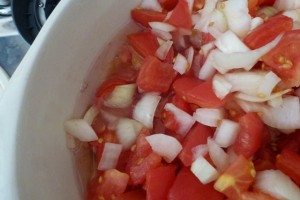 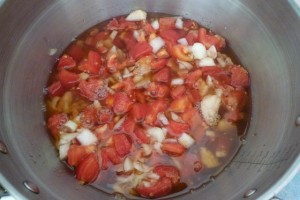 Put in pan with sugar and cover with vinegar

Mix flour, curry powder and mustard to a smooth past with a little cold vinegar.  Add to pan and boil 5 minutes.  Make sure the curry mixture is quite runny otherwise when you add it to the pan it is hard to stir through before it cooks and you get lumps.  If this happens, just use a stick blender to blitz the worst bits.  The relish will be a little less chunky but that doesn’t matter. 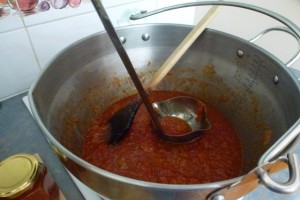 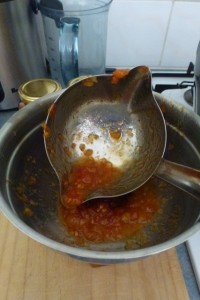 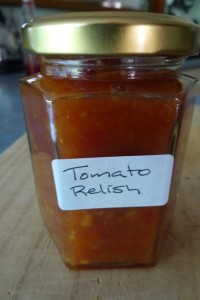 I gave a jar of this relish to a guy at work who had gone out of his way to help me with something and he declared it to be ‘the best relish he had ever tasted’.  For several weeks he gave me regular updates on how good it made his sandwiches!