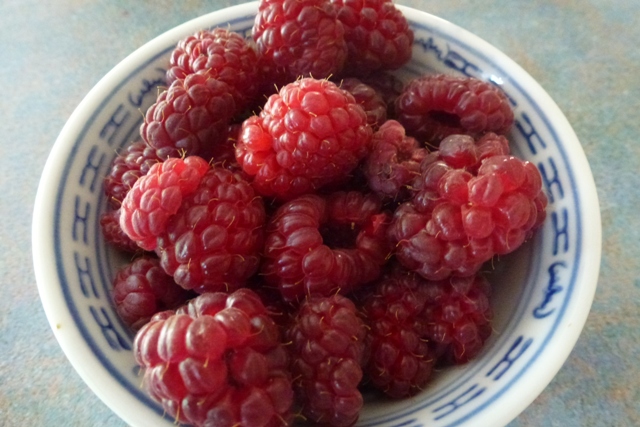 Raspberries are such divine fruit.  As a child I got to eat them on rare special occasions. As an adult the exorbitant price for a tiny punnet meant that I got to eat them a slightly more frequent occasionally.  We were always told we couldn’t grow them in Auckland because they needed a good winter chill to do well.  But a few years ago a new variety ‘Aspiring’ was released that thrives in the semi-tropical Auckland climate – and I bought a couple of plants. 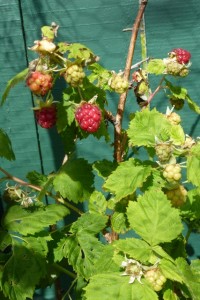 What a treat to be able to pick them from your own garden and just eat them on the spot! The first season that was all that I was able to do because there were only a few berries, with 2 harvest periods: one in December and another in Feb-March.  I also tried them in a couple of locations to find the best spot.  They like ‘cold feet and a warm top’ so the south side of my garden shed proved to be a winner.

The next season I planted them both in that spot and was handsomely rewarded with a handful of berries almost every day right through the summer and autumn.  I used them in my breakfast smoothies or fresh with yoghurt as a dessert.  Any I wasn’t going to eat immediately I put in the freezer and it is amazing how quickly they build up just a few at a time.  But they still had to be used to make something special like Rose & Raspberry Sorbet – it would be sacrilege to use them to make jam. 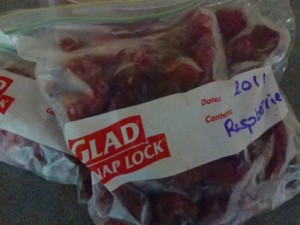 Freeze raspberries a few at a time 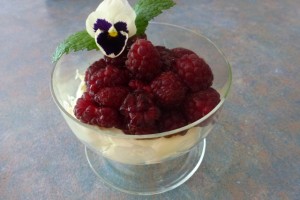 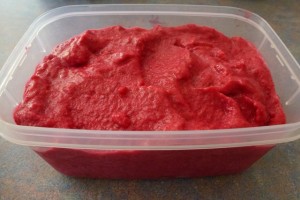 Last year I planted a few more plants (from runners that had sprouted up in all sorts of places in my garden) up against the fence in my new berry and orchard area.  Add I protected them against the birds using a cage made with posts topped with wire mesh and then draped in bird netting.  I had learnt the previous year that if I draped them with bird netting early on, the plants grew so quickly that they pushed through the netting and kept on going, leaving me with a tangled mess of netting and plants that I couldn’t resolve without damaging the raspberries. So I had to either leave them to their chances or drape them with more netting. 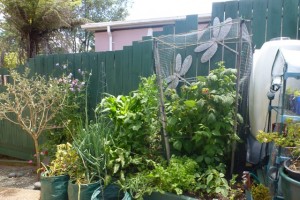 Best spot on the south side of the shed 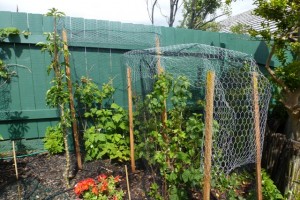 Against the fence in the new orchard area

Success! I now have enough berries that I feel comfortable enough to make raspberry jam as well.

I made the Quick & Easy Berry Jam recipe using jam-setting sugar.  I did have enough frozen raspberries to use a whole kilo of fruit this time but the beauty of that recipe is that you simply use equal quantities of sugar to match the fruit that you have so you can make just a small batch if you wish. 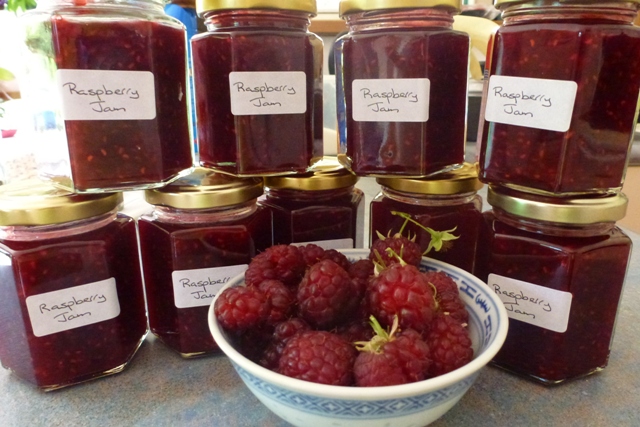