A very early start this morning (and just as well we didn’t rely on the wake up call).  Check in went fine but our plans for breakfast at the Koru Club lounge were foiled when United Airlines said they only recognised Gold Elite.  Waiting in the queue for passport control and screening used up a fair amount of our extra time.  We found a deli for breakfast and coffee.

Gill sat up the front of the plane again and I was definitely cattle-class down the back.  United Airlines is VERY no-frills: you had to pay for just about everything except water (even $25 for my suitcase).  I had taken a few snacks and had my own entertainment.  The couple sitting next to me had a few days in Cancun but were then looking forward to their holiday in New Zealand – so they asked me lots of questions.  We had a good tailwind and arrived about 30 minutes early in Cancun but then endured another long wait in the passport hall – the immigration forms were poorly designed so everyone was getting it wrong. Out the other side I tried an ATM and decided against it when they were going to charge $31.32 for the privilege – we changed some $US instead (it wasn’t until later I realised that Pesos also used the $ symbol – somewhat confusing – and in fact the charge was only NZ$3 (approx. 10:1 exchange rate)).

There were dozens of ‘professional greeters’ whose real purpose we never figured out but eventually we ran the gauntlet and made it outside where the real greeters with names on boards swarmed around.  After a few circuits we found ‘our man’ and were loaded into a van for transport to the Hotel Plaza Caribe (right opposite the bus station for an early start in 2 days’ time). 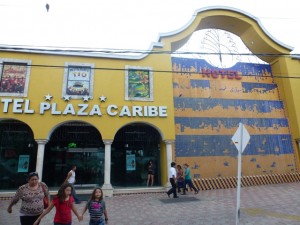 We checked into our room – now about 6.30pm and fluffed around with our bags fairly ineffectually before deciding that a margarita and dinner was a much better idea.  We toasted Salud to our first night in Mexico with a Margarita at the bar.  And then opted to dine at the hotel, which had several parties going on: a Quinze Años or Girl’s 15th Birthday (it is a big occasion – for girl’s only), and another function that we never figured out but included a room full of balloons.