We both managed to sleep in and then indulgently read our books for a while.  Late breakfast at the hotel with a Yucateco Breakfast: Fried eggs on a tortilla with fried bananas, and coffee.

Our Hotel Plaza Caribe is based in the downtown area of Cancun.  We asked for directions to a Scotia Bank (where we wouldn’t be charged a ‘foreign bank fee’) but ended up going very much in the wrong direction.  We turned around and finally found it and successfully withdrew money, eventually – who knew that you had to put your card in, take it out and then put it back in!!  We carried on in the Commercial District looking for the Tourist Information Centre that was promised on the map – without success.  A local confirmed that we were at the point on the map where the Information Centre was marked but that there wasn’t anything there.

So we decided to take a taxi out to the Playa (Beach) Hotel Strip.  Prior to 1970 Cancun used to just be a small  island – now it is linked up to form a rectangle around a lagoon with white sand ocean beaches on the outside.  It is totally built up, lined with hotels and shopping centres almost all the way along its 17km length. It has become the spring break paradise for young college students from the US – and representing everything I try to avoid – but it is worth a look (if only briefly). 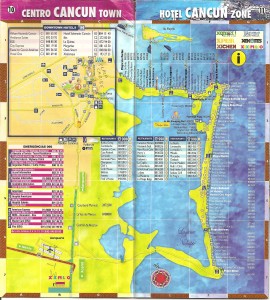 There are one or two public beaches but mostly you have to walk through hotels to get to the beach.  After being charged an exorbitant amount by the taxi driver, we got out at one of the shopping malls and found ourselves a café on the lagoon front for a large fresh lemonade that our waiter Manuel brought out carrying one on his head!  We were served complimentary corn chips and salsa as well.  It was fascinating watching all the rich tourists promenading in high heels and skimpy frocks (well, the women at least). It really was a place that the women went shopping and the men got to play on expensive water toys, getting drunk and being seen.  We even watched a place where people could try out jet packs – one managed pretty well but the next one spent most of their time in the water. 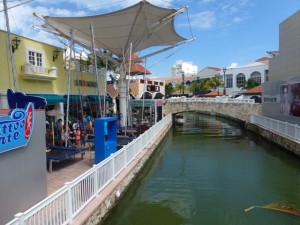 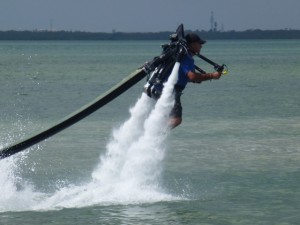 Then we crossed over and nonchalantly strolled through the Meridien Hotel, through their infinity pool area and down to the beach.  In both directions the white sandy beach stretched out into the distance, lined with hotels.  It was windy and with black clouds but still warm.  There were life guards and red flags all along the beach – and paragliders in the sky.  We walked on the beach for a while (feeling very overdressed) and then decided to catch a bus back into town.  It seemed to be all one price and 2 different routes, one of which included the bus station. We decided to go further in the same direction thinking it would do a loop, but it went to the end and turned around (and we had to pay again but only $1) so we got a good tour of the hotel strip and were very glad that we only had one day here. 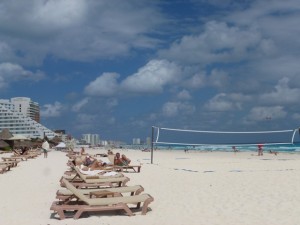 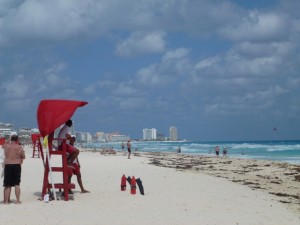 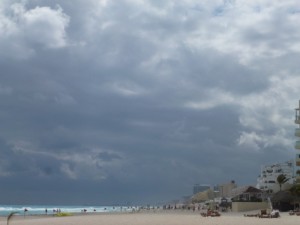 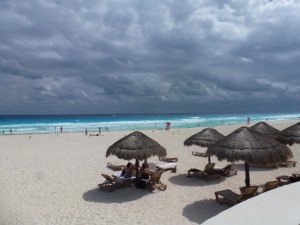 Hugo (24) is Guatemalan and has a wife and 16 month old daughter Ixchel.  His village is near the border with Belize (the only English speaking country in Central America) and he crossed the border every day to go to school in Belize, speaking Spanish at home and English at school.  His family recognised early on the importance of tourism and the benefits this would have.  He has been an official guide for 6 years.

After the meeting Hugo takes us for an orientation walk and then about half of us go with him for dinner at a little restaurant about 10 minutes walk away near the park and tried Tacos al Pastor.  This is Mexican meets Middle Eastern Schwarma: little soft taco shells filled with grilled pork, cabbage, onions and topped with pineapple.  We started with 2 each and all went back for seconds! Margaritas and beers were the obvious drinks to go with them – and for toasts to a great trip and to absent friends. 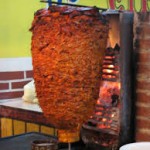 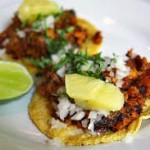