We have a relatively civilised start this morning with more delicious eggs at the hotel before checking out and heading across the road to the ADO bus station just after 8.00am. The bus is very comfortable and we have a 3 hour journey to Chichen Itza with just one stop in Vallalodid on the way.  We all try to extract our bags from the bus and then variously carry and wheel them up and down pavements and through corridors to get to the luggage room and exchange them for tickets.  We meet our local guide Raffa who takes us for a guided tour of the site. Chichen Itza is the most well known of all the Mayan archeological sites.  It is a Unesco World Heritage site and was voted one of the “New Seven Wonders of the World” in 2007.  However, it is an atypical Mayan site with evidence of it being a mixed community right from the start combining Maya traditions with those of migrants from central Mexico.  It is also the most cleared of all the ruins and as we walk along the path, El Castillo comes into view.  The pyramid is very impressive, but it is not until Raffa starts explaining the amazing mathematics that underpins its structure and the precision with which it lines up with major astronomical events that we begin to fully appreciate its magic. 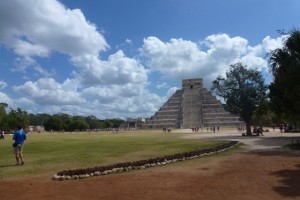 Our first view of the pyramid at Chichen Itza 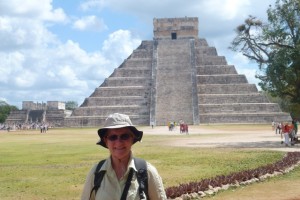 El Castillo (or Pyramid of Kukulcan) stands 24m high and represents the Mayan calendar.  It has 4 x 91 step staircases plus a single step at the top, adding up to 365.  Eighteen terraces divide the 9 levels that represent the 18 months, each 20 days long.  The nine levels symbolise the nine underground worlds.  Each side has 52 panels, representing the 52 year cosmic cycle (the point at which the solar calendar and lunar calendars coincide and a new cycle begins).  There are giant carved snakes either side of the great stairway.  At sunset during the spring equinox the light makes the snakes appear to come down the steps, indicating the time to sow their crops; and at the autumn equinox the snakes appear to climb up the pyramid, signifying harvest time.  Most amazing of all is the acoustics: if you clap near the steps you hear a normal echo but if you clap right in front of the north stairs the echo changes sound and matches perfectly the call of the Quetzal bird.  Even modern equipment can’t figure out how it is done but the pitch of both is exact. 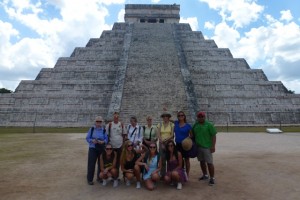 Our group in front of the North Steps 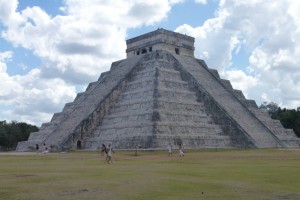 The Juego de Pelota or ball court is amazing: it is approx. 100m long and 30m wide with solid stone walls along both sides (the largest that has been found). A stone loop on each side is where the teams need to get the heavy solid latex ball through, without using their hands or feet.  There were 7 players a side and could often play for 4-5 days!!  Play was usually to the death, one way or another.  The acoustics here are also spectacular with visiting dignitaries at the far end able to hear clearly with just a second delay.  In the middle of the court, a clap returns a series of seven echoes. 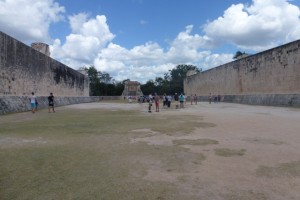 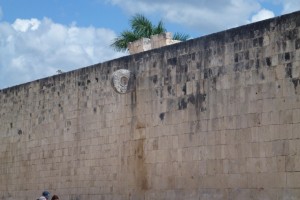 Oneof the hoops that they had to get the ball through 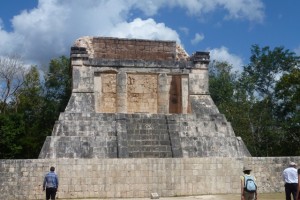 The ‘Royal Box’ at the far end 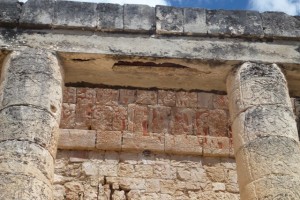 We were then shown the three sacrificial platforms: the Platform of Venus with stairways each side guarded by feathered serpents; the Platform of Eagles and Jaguars exquisitely carved with eagles and jaguars holding human hearts; and the Skull Platform with rows of carved grinning human skulls all the way around. 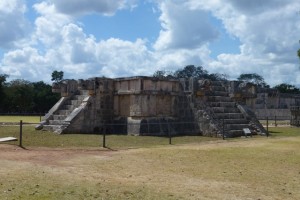 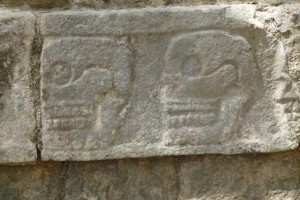 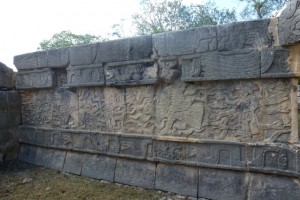 Platform of Eagles and Jaguars 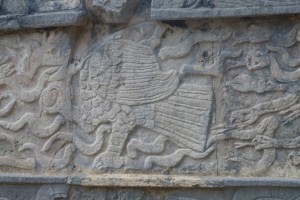 Next up was the Temple of the Warriors with columns carved like warriors and next to it the Plaza of a Thousand Columns thought to have supported a giant roof structure probably for a marketplace.  A statue of a woman giving birth is prominent in many places – 9 months tallies with a lot of the Mayan mathematics. 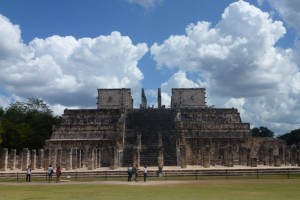 Temple of the Warriors 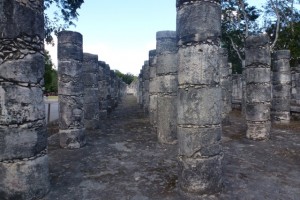 Plaza of a Thousand Columns

We then broke up our visit by heading out by taxi for a ‘local lunch’ – which although good turns out to be a huge buffet hall that lots of buses go to.  There was short round of local dancing that involved balancing beer bottles on their heads (I’m not sure that this really constitutes traditional dancing). When we came back we had time to explore ourselves the site a bit ourselves.  A path off to the side leads to the Sacred Cenote (60m diameter and 35m deep).  There are stories of sacrifices being made here. 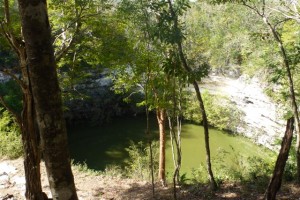 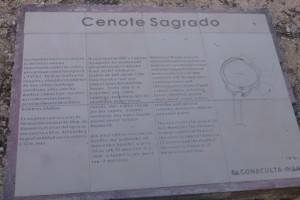 El Caracol is a domed circular tower shaped like a snail (giving it its name) that was an observatory with roof slits through which astronomical observations could be made with remarkable precision. 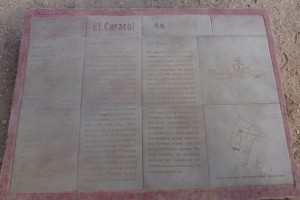 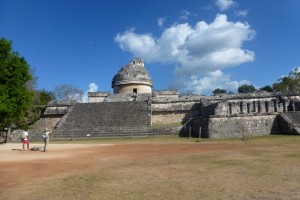 After our visit we get onto another bus for a 1.5hr drive through to Merida.  It has been a very hot day and we are exhausted from the heat, dust and walking.  By the time we reach our hotel (by taxi from the bus station) we have only 45 minutes to shower (cold) and get ready for dinner.  The Hotel Reforma is a beautiful old Spanish colonial style hotel with an enclosed courtyard in the centre.  The ceiling of our room is about 3 storeys high.  It is right in the heart of the city just behind the main square – perfectly positioned for exploring on foot but offset by the traffic noise on the cobbled streets. 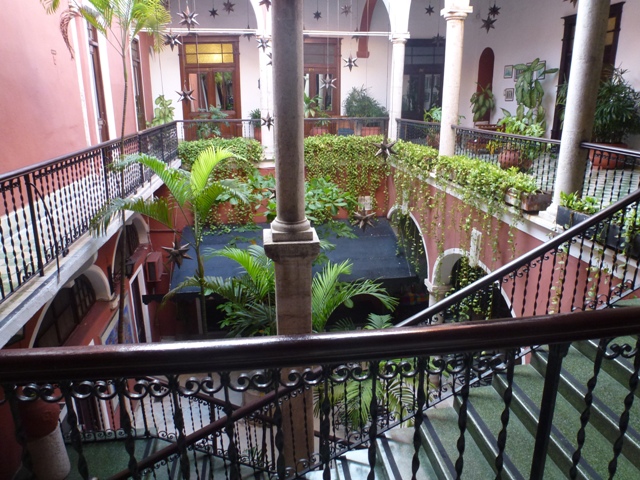 Hugo gives us an orientation walk up to and around the square – where there is a street party going on: bands and food stalls everywhere and families enjoying the evening.  Five of us stop for drinks and a snack at a table right on the pavement watching the world go by; and then walk around the square to try out treats like churros and something that looked a bit like a waffle or crepe served spread with a filling of your choice such as jam or nutella, before heading home. 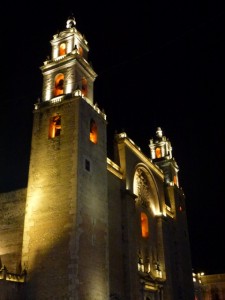 The Cathedral lit up 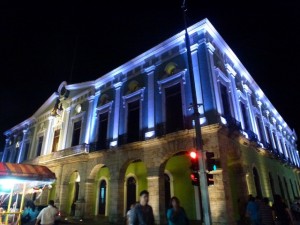 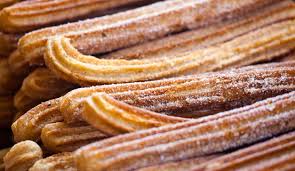 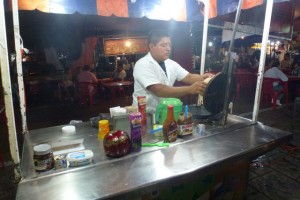 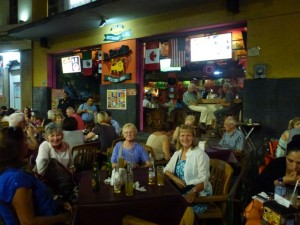 Enjoying watching the world go by