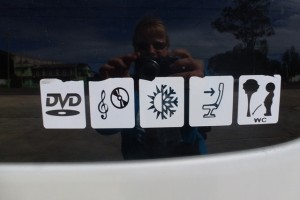 We have a 6.00am wakeup today for a very long travel day across the Mexican border into Guatemala.  We have to drop down off the Sierra Madre mountains to the border and then climb all the way back up on the Guatemalan side.  We have a shuttle that picks us up from the hotel and takes us to the border (about 3 hours drive and a stop for breakfast) and connects us with another shuttle in Guatemala.  Our driver for today is Elvis!

Mexican roads are fairly good in general (at least the highways) and not too crowded.  There are passing lanes and drivers are fairly courteous.  There are masses of signs all along the sides of the road: Do up your seatbelt; obey the signs; don’t drink and drive; don’t throw rubbish; keep our streets clean; etc.

We start off driving along the plateau through very fertile countryside with lots of small farms growing all sorts of different vegetable crops with a few animals (Friesian and Holstein cattle rather than the Brahman cattle we saw on the way to San Cristobal de las Casas).  As we started to head down we passed through lovely forests that included fruit trees in some areas; then through towns that specialised in ceramic ware, all with kilns and masses of firewood piled up.  Further down it became much more barren and brown.

At the Mexican border we hand over our passports and $332 pesos for our departure tax to Elvis to take in for us – and promptly get them back all stamped.  Then we unload our bags and trundle them over no-man’s land to Guatemala where the operation is very different.  Those not going back to Mexico ran the gauntlet of money changers to convert their pesos to quetzals (last opportunity).  There is no official fee to enter Guatemala, but you need to pay USD3 to ‘expedite’ the process.  Our shuttle was there but no driver in sight, so we all stood in the hot sun until he could be located.  The border also marks the boundary between North American (Mexico) and Central America – there is a big sign on the hillside.

All our bags are loaded onto the top of the shuttle (no tarpaulin this time and pack-straps are flapping everywhere).  We have 5-6 hours more to travel to get to our destination: Panajachel.  About 1.5hours in we stop at a petrol station with bathrooms, ATM and snacks.  We withdraw our next instalment of cash and try to get used to a new currency and conversion rate.  Thankfully 1NZD is approximately 10 pesos and 5 quetzals so conversion is fairly simple.  Estimating how much we will need for 8 days is not so simple: we allow for some purchases as well as food and activities (using USD3o per day as a guide for food/drinks/activities). 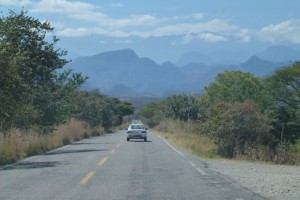 Heading back up into the mountains in Guatemala

The mountains are just beautiful as we head towards them ready to climb back up.  We are amazed by how different it feels even though these are the same mountains, same Mayan people etc.  The land is much steeper here so houses and crops are squeezed into any flat land available and lots of terraces have been created to use as well.  The roads are much worse and only single lane with speed humps every 50m or so.

Hugo is licensed to be an official tour guide in Guatemala so is now able to tell us a lot more about the country we are in without fear of being fined.  We wonder why the rocks on the roadside are painted variously in red, green, orange and purple. After a while we see words and symbols associated with the colours and Hugo tells us that they represent political parties – and the orange party are in power now.  A large portion of the indigenous people are illiterate, so the colours are used for politicking.  We hear about the political system: there are over 20 parties but it doesn’t work as we are used to.  They vote first for mayors for the different states (departmientos) and then vote for who will be president (must win by at least 51%). After the first vote they pick the top 2 and vote again.  They can only be in office for one term and there is a lot of corruption.

On the way we see pickup trucks absolutely loaded with locals – this is the only transport available in many of the little towns. 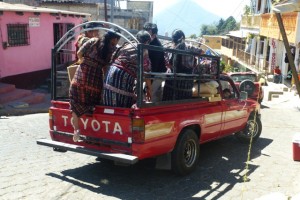 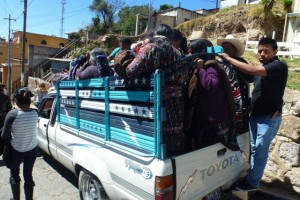 We also get our first view of ‘Chicken Buses’: old US school buses are reincarnated here.  They are given new diesel engines and spectacular new paint jobs.  It is not clear whether they are called chicken buses because everyone is jammed in like chickens in a coop or because chickens (and other livestock) are often carried on the roof.  Each bus has a ‘spiderman’ – their job is to load everything on the roof rack but because the bus can’t wait they must finish tying everything on while the bus is moving and then climb back in through a window.  Then inside there is generally no room so he must move about the bus on the backs of the seats collecting the fares. 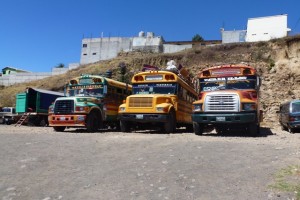 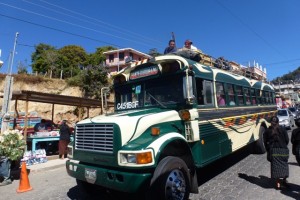 We climbed right up to 2200m and down and then up again.  Then we see the spectacular sight of Lake Atitlan surrounded by 3 volcanoes: San Pedro, Totelan and Atitlan.  Lake Atitlan is the second largest lake in Guatemala and the deepest lake in Central America.  We drop down another 500m to Panajachel on the lake side, passing through the state capital of Sololá on the way. 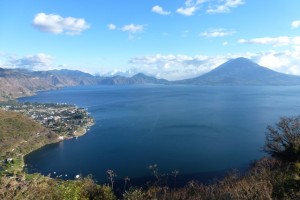 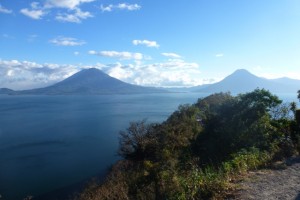 We eventually arrived at Panajachel around 5.30 to our Hotel Kakchiquel (this is also the name of one of the major Mayan groups based here).  We have an orientation walk and Lily, Anne, Gill and I eat at Chinitas Restaurant which has a band playing live jazz music.  It is a quirky Asian/Mayan fusion restaurant set in a covered courtyard that includes a bookstore and other businesses.  We end up talking with a very interesting US woman (wife of one of the musicians) who has lived and worked here for many years as a counsellor and Reiki and Bach flower practitioner primarily working with indigenous people suffering from post traumatic stress disorders after the Civil War.