We had originally booked flights that took us right through to Cancun without a stopover, but Air New Zealand changed their flight times slightly meaning that we could no longer make the connection.  So we had to leave a day earlier and have a short stopover in San Francisco.  Both my mother Gill and I had visited SF before so it was really just a chance to stretch our legs and have a sleep before the next leg of the journey.

Gill had decided to treat herself to business class flights this time as she had really struggled with jetlag on her last trip.  I wasn’t looking forward to a cattle-class trip but fortunately my request for a complimentary upgrade came through so I was in Premium Economy.  Although I was at the back of that section, flanked by toilets and with a busy kitchen behind, I didn’t have anyone in the seat next to me so I was able to lie down – curled around the curve in the seats and across the armrest/table in the middle.  Not particularly comfortable but a lot better than the contortions that would have required sitting up.  I actually managed to sleep for considerable periods before having to get up, stretch and reconfigure myself curving the other way round.  It was a treat to have real crockery and cutlery, and a gigantic glass of wine.  The crew took pity on me and served me first before they took the cart to the front.  Twelve hours went remarkably quickly and completed with a 3 course breakfast.

On the ground in San Francisco we had wait for literally hours in a queue waiting to clear passport control.  Finger printed and photographed, we eventually found our bags and then our shuttle (and had to wait at 4 different stops before heading to the city – another 30 mins). 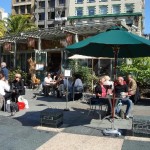 Hotel Adante is fairly central near Union Square – old but adequate rooms.  It was after 2pm when we arrived so we off-loaded our bags and went for a walk down Geary St to Union Square.  We spent a very pleasant hour or so sitting outside in the square with hot drinks and chocolate brioche, enjoying the sunshine and people watching. 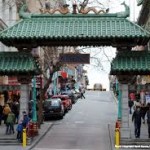 It was Chinese New Year so we wandered down to nearby Chinatown to see if anything special was happening.  There were bright red lanterns decorating the street but not much else.  A guy told us that there was a really big parade but that it would be on Saturday night.

It got really cold in the evening so we settled for the Pharaoh’s Egyptian Café adjoining the hotel for an early dinner, sharing Koshari and Hawawshy. 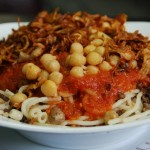 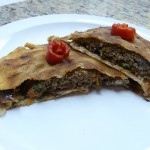 We ordered a shuttle for the morning and a 4.30am wake-up call – and retired for an early night.