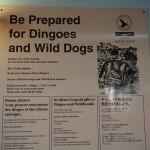 During the night we were woken by what I initially thought was someone doing a really bad wolf-howling attempt.  It sounded really close.  But then at least 6 more howls started up around us and I quickly realised that these must be dingos.  In the morning we discovered just how close they had been – actually in the camp, and just a metre away from where Phillip and Cathy were sleeping in their swags.  Opening their eyes to find a dingo looking at them wasn’t quite what they had bargained for.

A 5.30am start this morning, although many were up earlier to beat the rush to the ablution block.  5.45am breakfast of scrambled eggs on toast to fortify us for our morning’s hike.  At 6.30am we headed down the track again (even more scary in the dark) and drove out to the Watarrka National Park (Kings Canyon).  It can get punishingly hot out in the canyon and we are told that we will not be allowed to go on the walk unless we have at least 1.5 litres of water with us.   There are several cases a year of severe dehydration, and people getting lost and falling off cliffs (if you do, you won’t be coming back).  These have all been ‘freedom walkers’ and there is talk of requiring everyone to be part of a guided group.

We stand in the dark in the carpark hearing the safety briefings, wondering quite what is ahead of us.  First up  on the Canyon Rim Walk is Heart Attack Hill (500 steps nearly straight up) – few opt for the shorter 1 hour walk in the Canyon Valley.  The rest of us decide to brave the 4 hour walk and are told we must stick together and must not ever go closer than 2 metres to the edges.

As the first rays of light appear, we start to climb.  I had been very concerned about how I would cope with the 500 steps but thankfully they were natural rock steps and had lots of options for smaller steps (rather than requiring giant strides up steps designed by long-legged ranger types).  We paused for breath at a series of platforms on the way up and admired the unfolding view. 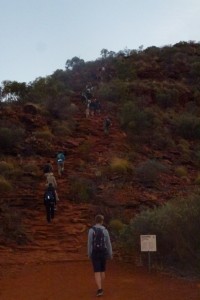 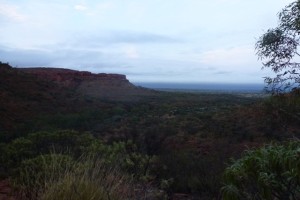 Once at the top, the Kings Canyon Rim Walk is relatively easy walking although you are scrambling over rocks a lot of the time rather than simply walking along a formed path. Track markers point the way.  It becomes clear why we shouldn’t go near the edges, no matter how badly you want that photo.  It is a spectacular alien desert landscape that I certainly hadn’t expected to be seeing.  We learn that this is a REAL canyon formed from a split in the rock whereas The Grand Canyon is actually a gorge formed by a river.  Some of this area was used for the filming of the movie “Priscilla, Queen of the Desert”. 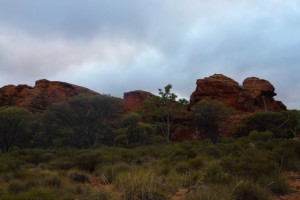 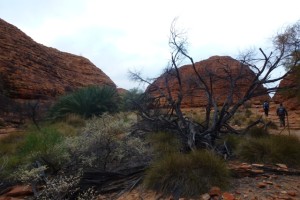 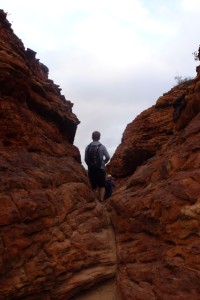 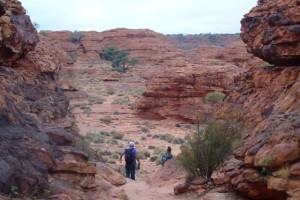 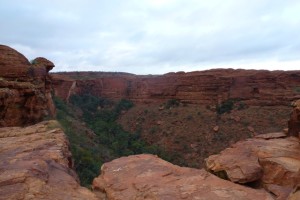 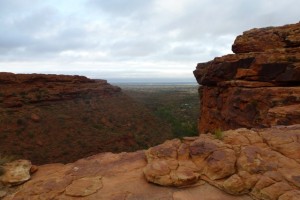 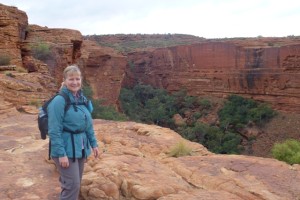 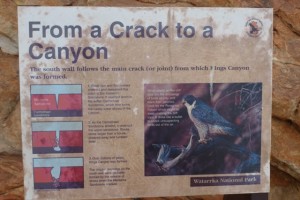 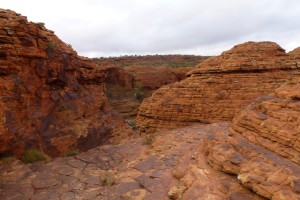 We hear about the geology and the plants.  As we heard at Uluru, the plants provide both a grocery and a pharmacy, although the distinction isn’t entirely clear.  What can cure you can also kill you.  We hear that the Aboriginals test for safety on the youngest girl (Cathy is looking worried at this point) – initially applying to the wrist, if no reaction apply to the lip, if no reaction apply to the tongue, if no reaction it is okay to eat.  We also see the slow-growing Cycad trees that have changed little since Jurassic times and manage to produce just one frond a year.  They have separate male and female plants with the male plants producing cones and the females producing giant stone-like seeds.

Usually people have to worry about heat stroke and dehydration but there is a cool wind blowing today and we wear at least 2 layers of clothing.  It is very pleasant for walking.  After many spectacular view points of the canyon, we reach a point where we descend steeply into the canyon into what is known as the Garden of Eden.  Water holes make it an oasis in the desert with lush trees and plants and apparently lots of wildlife.  We see quite a few birds but unfortunately there are 2 other large noisy groups down there with us so we don’t get to appreciate the beauty in the silence it deserved or a chance to spot any wildlife.  We had a quick stop for a drink and a biscuit and then unanimously voted to try and get well ahead of the others.

It was a steep climb back up to the rim on the other side – the South Rim – and then across the tops and back down.  We pass a point where there is a gate that gets locked after 9.00am to stop anyone coming from the other direction going any further because it would usually be too hot to safely continue any further after that time.  Because it wasn’t hot, we make pretty good time back to the car park, tired but very impressed with the Canyon.  I hadn’t even known of its existence previously but it certainly a site to rival Uluru (especially combined with our bush camp experience). 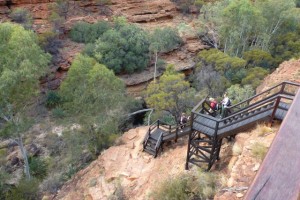 Descent to Garden of Eden 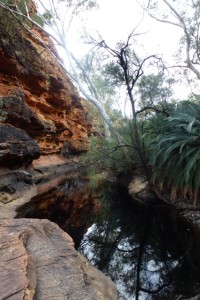 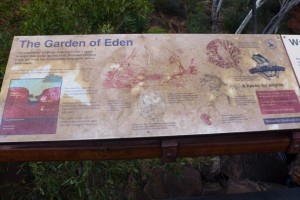 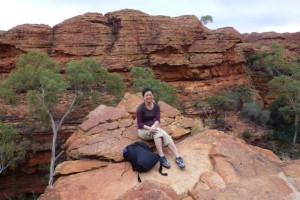 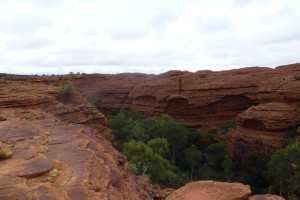 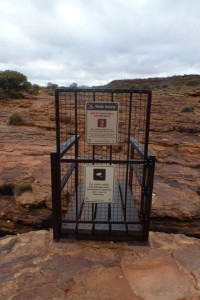 Track closed after 9.00am 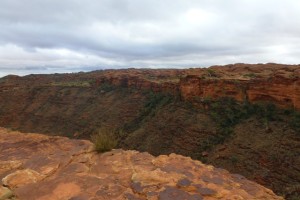 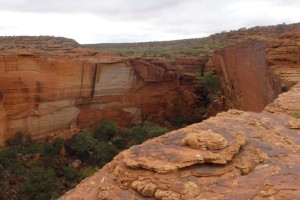 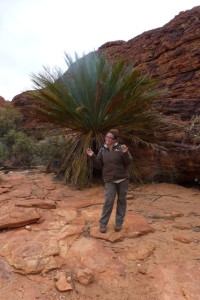 We head back up to the camp where Blanket has an early lunch of taco wraps waiting for us.  Then we climb back into the vehicle ready for a 6 hour trip (540 km) back to Alice Springs.  Once we have negotiated the track back down again and stopped at the petrol station to stock up on supplies, most of us settle back for our now customary afternoon snooze while Kelly does the driving.  She sings loudly to music in the front cab and drinks energy drinks to keep her awake.

About 2.5 hours later we get to Mt Ebenezer Roadhouse for a toilet break and leg stretch.  The Roadhouse and surrounding Station is owned and operated by the local Imanpa community – one of the few Aboriginal-owned stations in the Northern Territory.  There is a store (complete with kangaroo tails for sale in the freezer), restaurant and aboriginal art gallery.  It has only just recently re-opened after going into bankruptcy earlier because of struggling with the concept of sharing amongst the tribe versus the requirements of commerce.  A few freebies to locals soon mounts up over the course of the year.

Another 2 hours or so later we stop at Stuarts Well for a break.  This is an interesting little place with a whole menagerie to view: a little terrier meets us at the front door, various birds squawk from their perches and there is even a python in its own heated cabinet.  Chickens roam around in front. 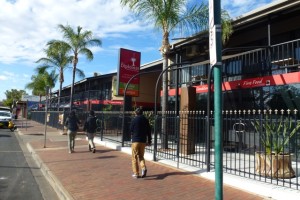 Next stop Alice Springs.  We discover again as we had at the beginning of the tour that there is a mix of different tours co-existing – apparently a lot more common in winter as there aren’t enough people on each tour to make it worthwhile running.  Nine people are only on a 3 day tour and they get dropped off at various hotels on the way in.  Seven of us are doing the 4 day tour and we are staying the night at the Diplomat Motel.  I have a single room that is literally a single bed with ensuite and not much else, but it is perfectly adequate.

Carmella, Boon Li, Kuen and I meet for dinner and walk just up the road to an Italian restaurant that is humming – Alice Springs on a Saturday night!  It takes a long time to be served as there is a girl’s birthday party and a large group of boys ahead of us.  But the meals were good when they arrived and the company was good!  We stopped at the supermarket on the way back to pick up some things for breakfast.  I don’t even have the energy to read when I get back, and just hop into bed and turn out the light.