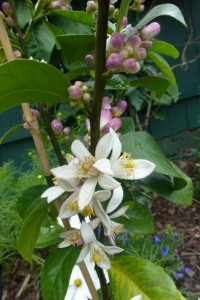 Several of my friends have told me that they used to get an orange in their Christmas stocking because it was such a special treat.  I don’t think many kids would be happy with that these days!  Although perhaps not considered quite so special any more, citrus fruits are fantastic to have in the garden to brighten up the winter. Citrus blossom has a delicious scent in spring and is good for attracting bees and other pollinators. Citrus are such a fabulous source of vitamin C  and other nutrients at a time when there aren’t many other fruit around.

Lots of gardens around Auckland have the almost obligatory lemon tree or grapefruit tree but for some reason oranges and mandarins seem to be much less common.  They should require the same conditions, so when I started planting up my home orchard, I decided to include a wider range of citrus trees.  I now have a navel orange and a satsuma mandarin along with lemon, lime, and grapefruit trees.  I planted a ruby grapefruit as well as the usual golden variety but unfortunately one died and I stupidly didn’t keep the labels on so I have no idea which to replace as the remaining one hasn’t fruited yet.

Both my navel orange and satsuma mandarin trees have established nicely.  Last year they only produced one or two fruit but this year they had about 20 fruit each so I was very satisfied.  The slugs and snails that are the plague of my garden have now taken to climbing trees!! I discovered ‘nests’ of little snails in my mandarin where leaves rested up against the fruit even though I had put bait all around on the ground. 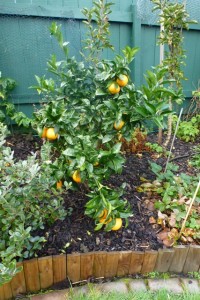 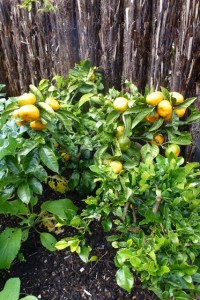 Citrus are pretty hardy but don’t like frosts – the half dozen times a year we get a frost doesn’t seem to upset them too much but you can cover particularly young trees with frost cloth to make sure.  Plant new trees in autumn to allow plenty of time for them to get established before summer and remove any fruit in the first year to let them establish properly. 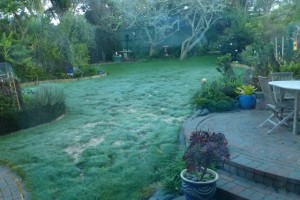 A mild frost doesn’t seem to harm the trees once established.  The lawn is patchy after removal of masses of paspallum.

The trees will grow in most soils but they don’t like clay or having wet feet.  I added lots of compost to my clay soil and raised them up a bit on a mound to help drainage and they seem to be doing fine.  Even though they don’t like wet feet, they do like lots of water during the summer.  And fertilising them a couple of times a year (in August and February) makes a big difference to fruit production.  Use a citrus fertiliser.

You can grow them in pots but good regular watering is essential for them to thrive.

Citrus trees don’t require much pruning. Give a light prune after fruiting has finished and to remove dead or broken branches or to shape the tree.  Use a pruning paste on the cut branches to help avoid lemon tree borer getting in.