If you are making Christmas cards then I always find that it pays to make them earlier in the year before the silly season starts.  If you wait until nearer Christmas then it can become incredibly stressful rather than being fun because there always seems to be much more happening later in the year.  In the southern hemisphere it is coming into summer and it is often much more inviting to be outside in the evenings and weekends enjoying the longer days rather than inside making cards.  So I aim to make mine in June/July so that I can know that I am prepared.

Your approach to making Christmas cards can very much depend on how many you are intending to make.  If you are just making a few cards then you can afford to lavish attention on them but the more you make then generally the simpler the process needs to be. 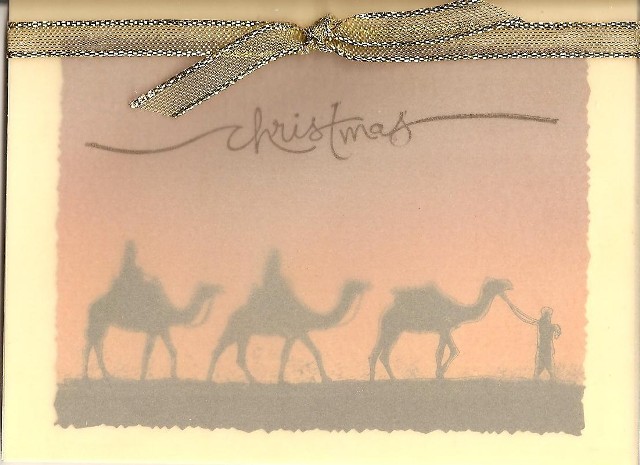 At the very simplest, you can save up all your old Christmas cards and re-use them by cutting up the images and sticking them on new card. This can be as simple as just sticking them on or you can use pieces in a more elaborate design and add your own words or other embellishments.  You don’t need to worry about giving them back to the original sender – most people who simply purchase cards would not remember what card they sent to whom last year.

Although not quite as easy to use, you can do the same with wrapping paper to create very cost effective cards. 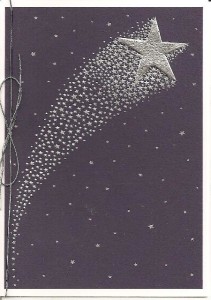 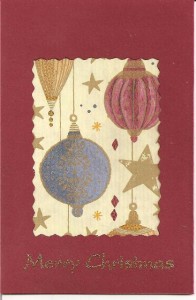 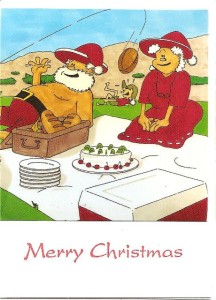 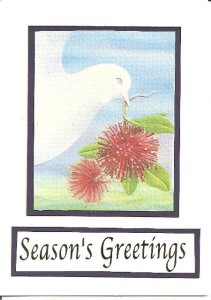 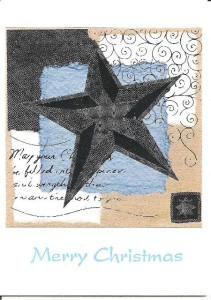 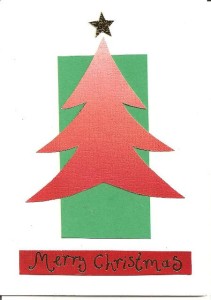 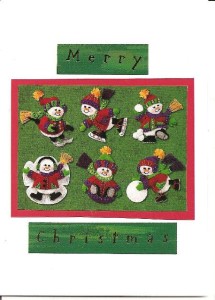 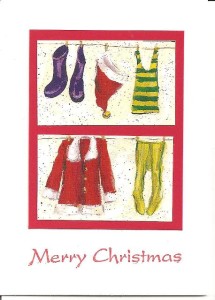 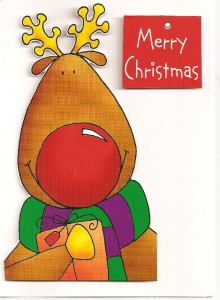 I have been making Christmas cards for many years now and to start with I just made a few cards.  I tried to keep them simple but initially they involved having to stamp the same image over and over.  I was wanting my images to look glossy so I used embossing powder to give a glittery or shiny look – but this was very time consuming and it was more likely that I was going to have some mishaps. 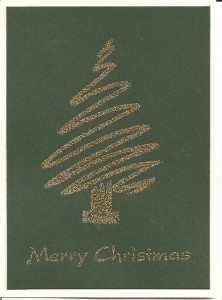 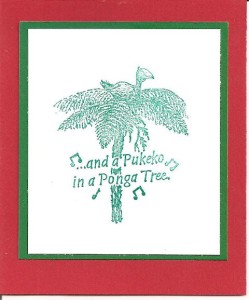 I tried taking photographs – for me it was the flowers of the NZ Christmas tree, the Pohutukawa – and using that for my card.  I printed out the photographs using my printer, cut them out, used gold leafing pen around the edges and then mounted them using foam dots so they stood out from the card. 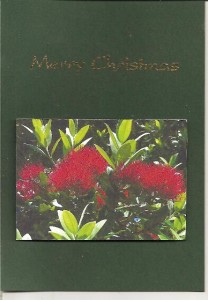 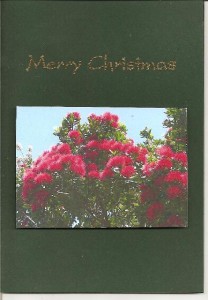 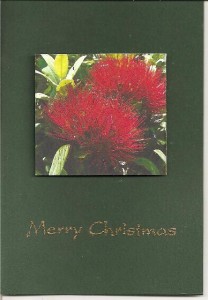 Then I decided to try an embossing finish using my Cuttlebug machine by running card through the machine with a Christmas-themed embossing folder and then adding a few embellishments.  I did this using some green card as the base that was embossed, pieces of red ribbon and some small square pieces that were cut out of old cards with a slightly larger red square behind or a simple tree stamp onto card cut out using a circular punch with a slightly larger red circle behind.  You can do this effectively with other colour card as well or use the embossed card as the background for sticking cut-outs of old Christmas cards onto.  Although it still takes time to do, you don’t have to concentrate too hard and the results are fairly uniform. 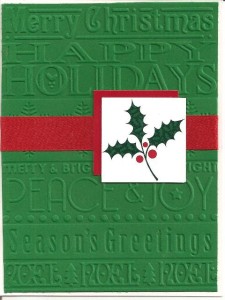 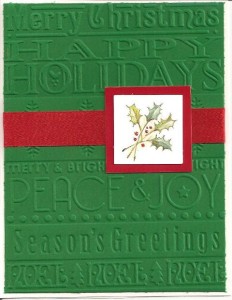 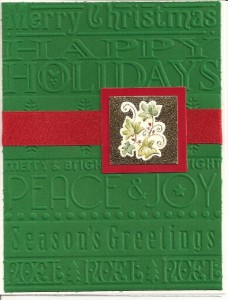 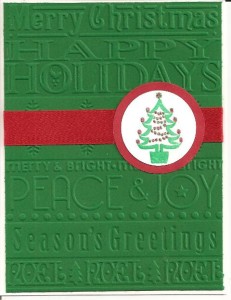 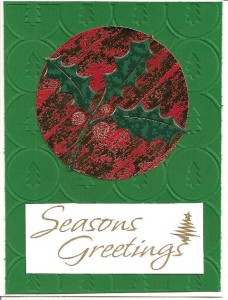 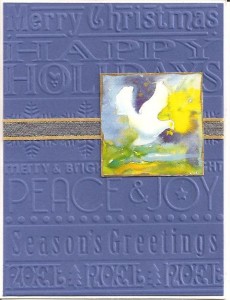 Another simple but effective way of using the Cuttlebug is to use a die first to cut out a shape and then put the shape into an embossing folder to give it some texture.  I used a tree shape cut out of green card and then an embossing folder with circles that I thought looked like baubles. Topped with a punched out red star it became an elegant card.  I embossed the card behind as well but it doesn’t show up well in the photo.

More recently I have discovered a very easy way of producing nice glossy cards without too much effort – inspired by my earlier use of photos.  I start by stamping and colouring an image onto a piece of card (quarter of an A4 sheet; roughly 15cm x 10cm).  It can be as elaborate as you wish as you only have to do it once.  Scan the image and then print it out onto glossy photo paper.  If you print 4 images per page they will be the right size for normal cards (A5 folded in half).  But if you print them out 9 to a page then they will be perfect for a smaller size card (A5 cut in half and folded again).  You can cut them out using a guillotine or cutting board, or use craft scissors to give shaped edges.  You can simply stick this onto coloured card or you can mount them with coloured cardstock or paper to add to the effect.  Striped paper/light cardstock is great for Christmas – I’ve often used various different stripes from my collection rather than using exactly the same for every card. 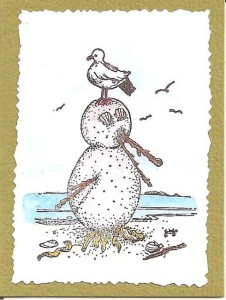 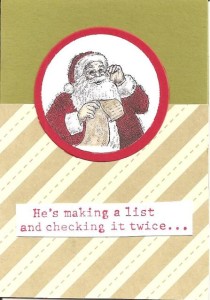 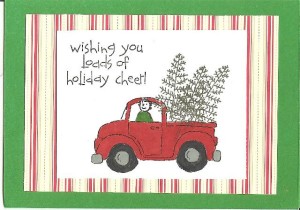 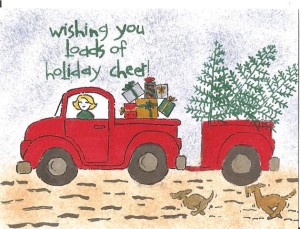 This has been a fantastic discovery for 2 reasons: one is that I can produce a series of nice glossy cards relatively quickly. The second is that using the smaller size card I am happy to make many more cards than I normally would.  I usually make the larger size cards for people I am sending a card to and then make lots of the smaller ones (without an envelope) to give to people I see regularly.  It is lovely to be able to give a little something to people I work with, and something handmade that doesn’t involve chocolate seems to be welcomed.  I was very chuffed to find that some people have kept every Christmas card I had given them – making sure they had the whole collection.

And NO I’m not showing you this year’s card, but I have made 20 large and 45 small ones.