Decoupage (coming from the French word découpe, meaning to cut out) is “the art of decorating an object by gluing colored paper cutouts onto it often in combination with special paint effects or gold leaf and so on”.  Traditionally 30 to 40 layers of varnish were then applied over the top and sanded to a polished finish but you don’t need to go to that extent unless you want to. 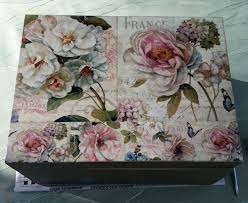 Commonly decoupaged items are jewellery or keepsake boxes but you can apply decoupage to anything you like. If you search on Google Images for ‘decoupage’ you can find chairs, chests of drawers, tables, tin cans, bottles and jars, plates, birdhouses, teapots, picture frames, plant pots, lampshades, photograph albums, ceramics … the list goes on.

In a similar fashion you can use just about anything you like (but usually paper) to to cover the items with : newspapers, magazines, catalogues, books, printed clip art, wrapping paper, greeting cards, fabric, tissue paper, lace, paper napkins or purpose-made decoupage papers.  You can use whole pieces of paper, you can tear it, or you can cut your paper to make interesting shapes and designs. 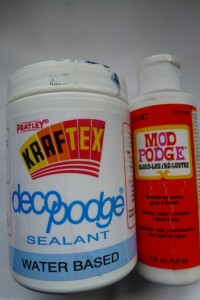 You can buy specialty decoupage glues in most crafting stores – Mod Podge is a well known brand. But you can also use standard white (PVA-type) glue diluted with water – approx 3 parts glue to 1 part water. You can also use your glue or other decoupage medium as a sealer. Other sealers that are commonly used if you want a smooth shiny finish include polyurethane, spray acrylic, epoxy resin or other lacquers. The idea is that each layer is sealed with your glue or ‘varnish’ until the “stuck on” appearance disappears and the result looks like painting or inlay work.

First you need to prepare your object.  Depending on what it is, clean it or sand it to get a good base. Painting it can provide a good surface which is easy for things to stick to; it also gives a good colour base if you are using a tissue paper which is thin and will allow what is underneath to show through.

I experimented with 4 different cardboard based containers and notebooks, and used some specialist decoupage paper that I bought at a craft show. Although it is common to tear the paper into pieces to stick on, I really struggled with this because one of the papers was so nice just as it was and it seemed silly not to just use it that way, and the second paper was a very regular squared design which I left whole in one instance and cut into the squares for the other.

The easiest one that I did was to simply stick the squared design onto the lid of an already plain white box: applying a layer of glue, carefully smoothing the paper down across the top and then covering it with another coat of glue to seal it. I used this as a gift box for cards and finished it off with a matching ribbon. 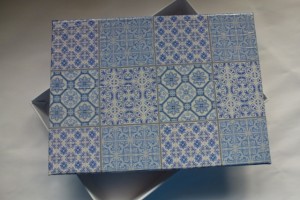 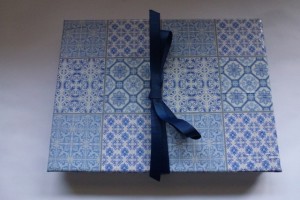 I tried a second container using the same decoupage paper: this time a cylindrincal cardboard container with a lid.  First I painted it white to cover what was on the container – it doesn’t need to be a perfect cover.  For this one I tried to be a bit more adventurous and cut up the design into the squares and stick them on more randomly – I’m not sure I really liked the result though. But I painted on a stripe of blue pearlescent paint around the edge of the lid and it made a great gift box for some homemade bottles of cherry guava cordial, ginger syrup and feijoa vodka.  When you are applying smaller pieces of paper you don’t have to apply glue to the whole surface first but you can just paint a bit of glue on, stick on the paper and paint glue over the top to seal it, not worrying about going over the edge.  So you can just do a few bits at a time if you want to. 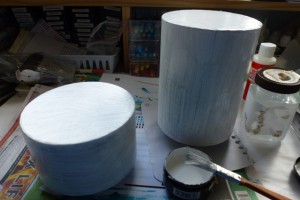 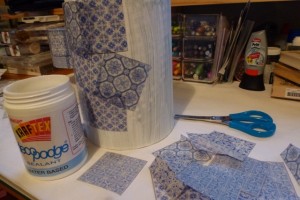 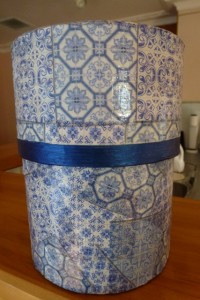 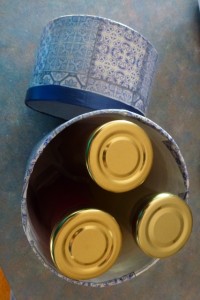 The third item I tried ended up being a bit more complicated, partly because of what it was but also because I had to cover up some mistakes (which ended up better than expected).  This was a notebook with a cardboard cover, a cardboard pen holder and a cardboard pen that I had got at a conference.  The paper I wanted to use had a pale blue tinge to it, so I decided that I really wanted to bring that blue through.  So I painted the notebook covers with a bright turquoise paint inside and out, and also the pen and pen holder.  I wanted to use the paper whole, so cut a piece just bigger than the front cover so that I could fold the edges over to the other side.  But I could have cut it exactly the same size and left the blue edge showing because with the glue sealing it all off you don’t need to worry about loose bits at the edges.  I learnt that if you make a hole in the paper while trying to apply it and then try to patch it – it will show!!  You don’t have to worry about that if you are applying random pieces because you can easily cover it up.  I ended up sticking a piece of ribbon around the cover and adding an embellishment to cover up the patch!  I also decided not to decoupage the back cover or the penholder because I thought it would be too much.  I am very pleased with the result :-).  You have to be much more patient with an item like this and allow the paint and glue on one side to dry before doing the next. 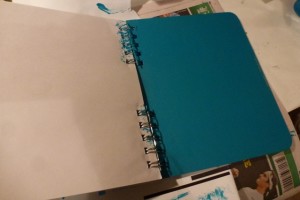 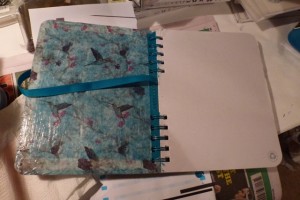 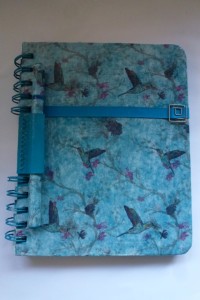 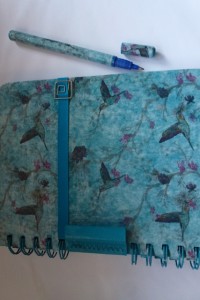 My final piece was another (smaller) cardboard cylinder container. I painted this the same turquoise as for the notebook and decided again to just use the decoupage paper intact rather than tearing it into pieces.  Because I was using the paper whole, I decided to leave quite a few parts of the container just painted and put the paper around the main body and lid. 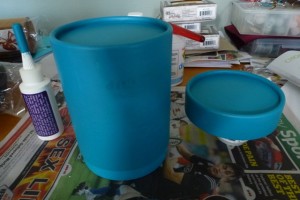 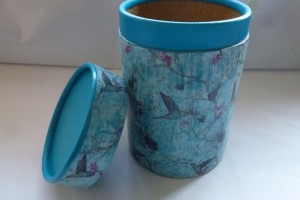 My friend Steph did some decoupage using a Colman’s Mustard tin as her starting point.  She painted it white first and then used as her decoupage paper pieces of tissue that had been used to clean up inks during other craft activities (this time spatter techniques).  She finished her creation off with gold washi tape.  I really like the result and think that it makes a lot more sense to tear pieces of paper to create your own design when the paper doesn’t already have a definite design on it (although putting a feature image on it would also be effective).  It is also a lot cheaper if you are using scraps rather than buying new. 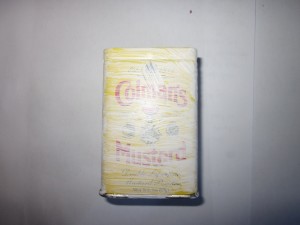 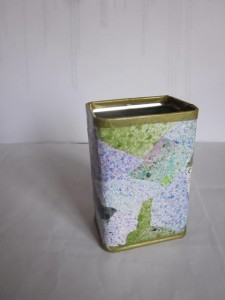