I bought a Mad Millie Cheese Making Kit and have been making my way through the different types of cheeses. I am continually amazed by the wide range of different types of cheese you can make with the same starting ingredients.  This time I decided to try making Colby cheese (similar to cheddar but slightly moister and with a mild creamy taste).  It was my first venture into making hard cheeses that require a cheese press and aging.  It was still described as being “easy” – which it is – but it does take the best part of a day to work through all the various steps that are required.

As with all cheese making, sterilise all equipment first.

Put the milk into the large pot and heat to 30C.  Add the calcium chloride with the pipette and then stir in the starter culture.  Cover and leave to rest for 1 hour at 30C using a water bath (fill your sink with 30C water).

Add in the diluted annatto colouring and stir in diluted rennet. Continue to stir for 1 minute to ensure the rennet is even dispersed through the milk.  Cover and leave for another hour at 30C. 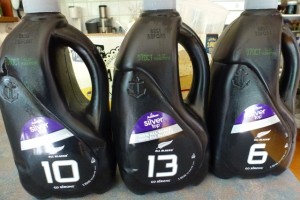 Full fat unhomogenised milk (can you tell the All Blacks were playing in the Rugby World Cup?) 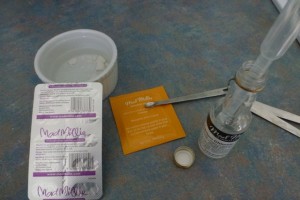 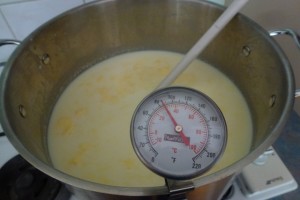 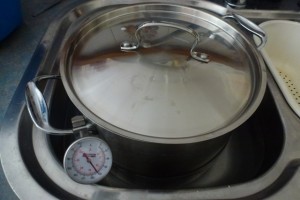 Once the curd has set, cut into 1 cm cubes with the curd knife. Leave to rest for 5 minutes.  Heat the curds slowly to 39C over 20 minutes, stirring gently and frequently.  You only need a very low heat for this or it will heat too quickly.  Then keep the curds at this temperature for another 20 minutes.  Keep stirring occasionally to stop the curds from matting. 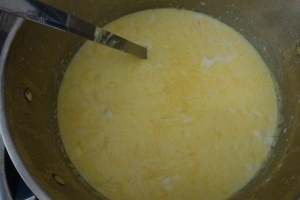 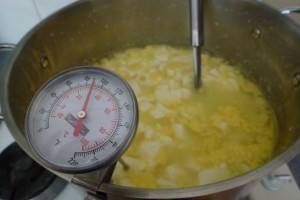 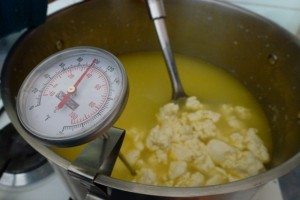 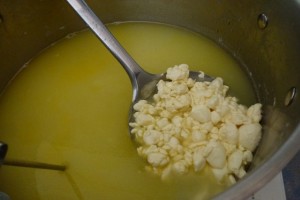 Pour off the whey to the level of the curds. Slowly add cool water to the curds, while stirring until the temperature reaches 27C.  I don’t think I poured off enough whey because it took a lot more than 5 cups of cool water to bring it down to temperature.  Keep the curds at this temperature for a further 10 minutes and stir frequently.

Scoop the curds into a cheese cloth lined colander and allow to drain for 10 minutes.  Then place the curds in a bowl and blend the salt through the curds with clean, sterile hands. 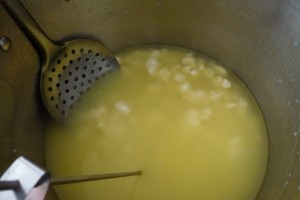 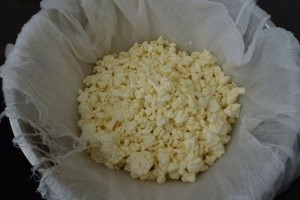 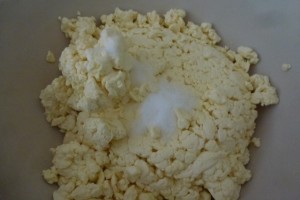 Tip curds into bowl and mix through salt 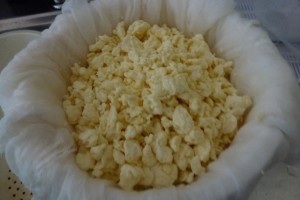 Remove, flip, redress and press again at 15kg for 30 minutes. Then remove and flip again and press at 20kg for 12 hours.  Can be longer if it is overnight. 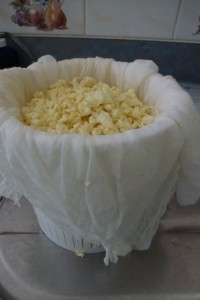 Curds in mould part of press 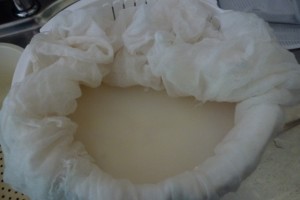 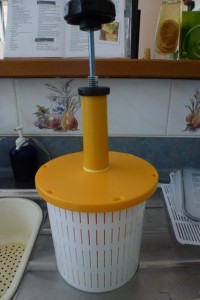 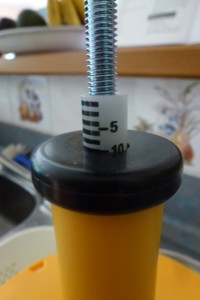 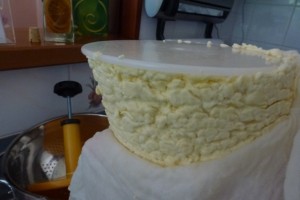 After 30 mins remove and flip 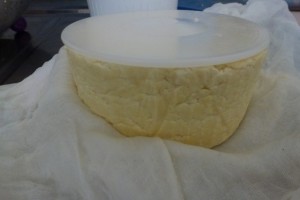 Cheese becomes firmer with each press

Then remove the cheese from the press and place on a sterilised cheese mat.  I cut mine into 4 smaller pieces.  Air dry at 10-13C until the cheese is dry to touch.  Keep the cheese covered with a mesh food cover or put in a cheese maturing box covered with cheese cloth.  Turn the cheese every 4 hours or so for the first few days, then once a day, to prevent moisture from collecting at the bottom of the cheese. 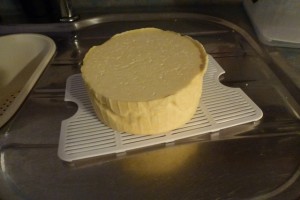 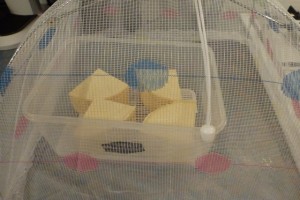 Once the cheese is dry to touch, it is ready for waxing*.  Once waxed, age the cheese for 2-3 months at approx 10C.

*Heat wax in a metal bowl over a double boiler until melted.  Dip cheese halfway into the wax for 5 seconds, wait a few seconds for it to cool, turn the cheese around and dip the other side into the wax. Repeat until the cheese is covered in wax leaving no holes.  The wax retains the moisture within the cheese and stops unwanted mould from forming on the outside while it is aging. 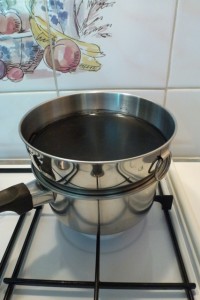 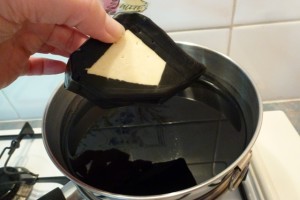 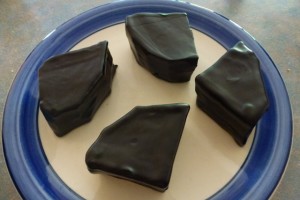 My misshapen pieces of cheese

I didn’t have anywhere suitable that I could keep the cheese at 10C and, despite my best efforts at keeping the cheese and anything that touched it sterile, I got a mould growing over it while it was drying. In hindsight I also shouldn’t have cut it into pieces at that stage because it presented more surfaces to attract mould. I cut the mould off the outside before waxing the cheese and hoping for the best.  I don’t really want to buy a fridge or incubator for occasional cheese making, so I may have to wait until winter and try again then to see if it makes a difference.

Two of my pieces of cheese survived the aging process to come out mould-free and were pretty good with some sourdough bread and tomato relish. 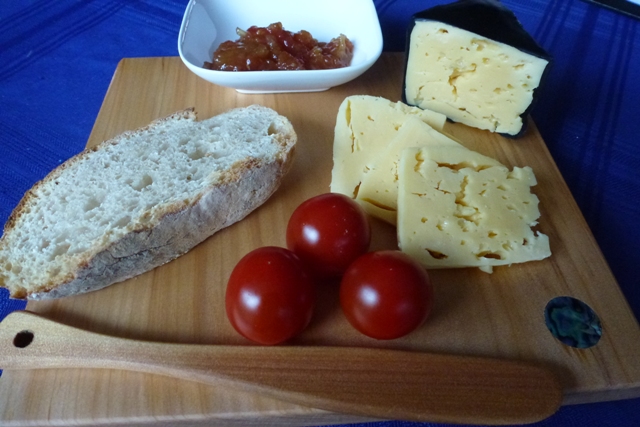