Today we travel to our third country on this trip – Lithuania- and visit the Hill of Crosses and Trakai Castle on our way to the capital Vilnius.

We have a trip of 300km in a mini-bus (unfortunately not so comfortable as the previous one). On the way we detour through an area that was the Duchy of Courland during the Romanov era and see a magnificent castle that just appears out of nowhere – an enormous fairytale palace. The Baltic States were the primary filming locations for the recent BBC adaptation of War and Peace. Ieva said that she’d need to watch it all again because the first time she was just recognising all the buildings and interiors.

We have another uneventful (nothing happened at all) border crossing and crossed over into Lithuania where almost every inch of land seems to be utilised in some sort of agricultural endeavour. There is great excitement in the mini-bus as we started to see animals outside in the fields (and an ongoing debate between two of our group about whether it is better for them to be inside or out). There are ploughed fields, tractors and combine harvesters, and crops of onions lying out to dry off. Every house seems to have a little glasshouse outside along side the vegetable patches and fruit trees – it is really picturesque. Both Estonia and Latvia are essentially totally flat so it is with great excitement that we start to notice hillocks appearing in the countryside. There are 3 million people living in Lithuania and we notice the increased population density.

Our first stop is at the Hill of Crosses near Siauliai. The legend is that a farmer had a sick daughter and it came to him in a dream that he must go to this specific place and put a cross there and his daughter would get better. It worked and word got around that this was the thing to do – now a cultural rather than necessarily a religious activity. People across many centuries have come to this place (more of a hillock than an actual hill) to leave crosses and rosaries. Both German and Soviet troops in the past have tried to crush this symbol of national and religious fervour, but images of the Virgin and literally thousands of crosses always reappeared despite their best efforts to destroy them. Now it is more formally recognised, with even the Pope celebrating a mass there, and a monastery has now been built nearby. It is quite peculiar seeing this field of crosses in the midst of fields of onions but is clearly quite a pilgrimage site. Wandering through the masses of crosses is quite eerie and we remind ourselves that all these represent people who have felt in need. 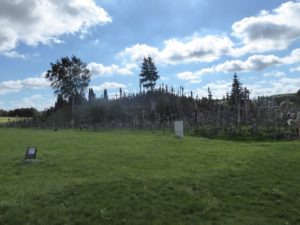 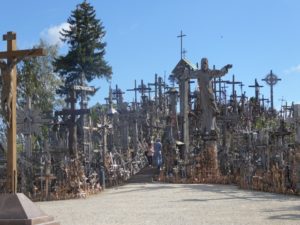 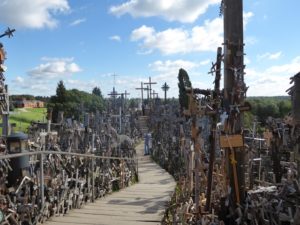 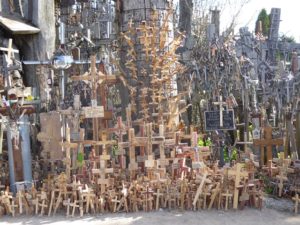 A short while later we stop at a shopping centre for lunch and we all go to a place with fixed menu options as we need to leave promptly to get to our next destination in time for our booked tour. There are 3 options on the lunch menu for today and 6 of us choose the pancakes, but then we are told there are no pancakes (how can there be no pancakes when there are only 3 things they needed to provide today and it is only just 12.00??). Eventually we choose pizzas off the main menu but these take forever to come and we are only able to have a single bill for everyone so it takes quite a bit of time to sort out.

Back on our mini-bus we have another 3 hour drive to Trakai Castle; our driver makes good time and we get there just before 4.00 – perfect timing for our tour. For some reason we are no longer able to get an English speaking guide, so Ieva has to translate from Russian to English for us (she is Latvian). Trakai Castle is a castle on an island in the middle of Lake Galve, which has fairly recently been restored (a peninsular castle ruin is also visible). Trakai is the former capital of the Grand Duchy of Lithuania. The splendid red brick castle dates back to the 14th century and houses some interesting museums, including an exhibition on pre-war Lithuania.The interior has been well set up depicting life, battles, peoples, with all manner of interesting artifacts. There are also some interesting ‘punishments’ in the courtyard area: the ordinary ‘stocks’ and an iron cage that you stand in. Dermot and Lance demonstrate how they were used. 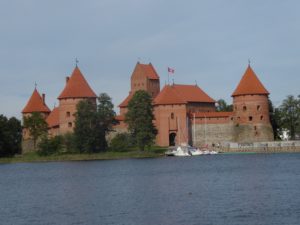 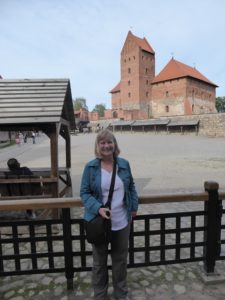 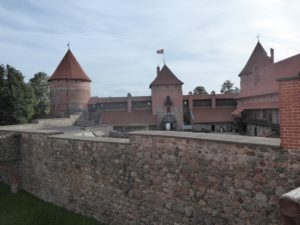 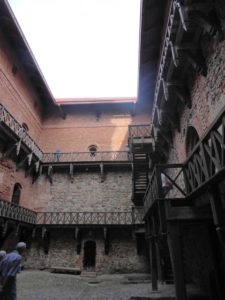 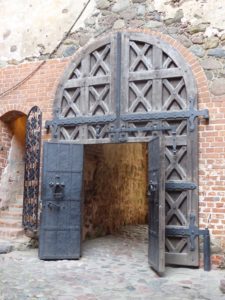 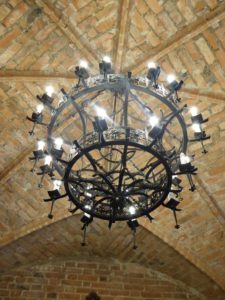 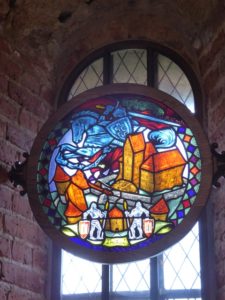 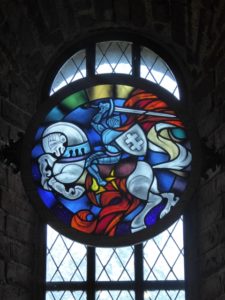 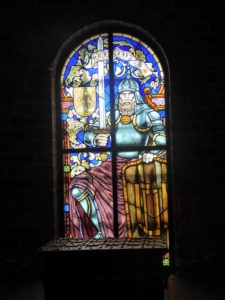 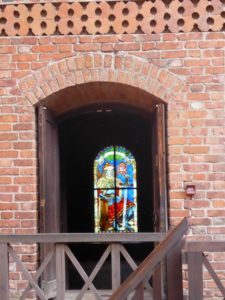 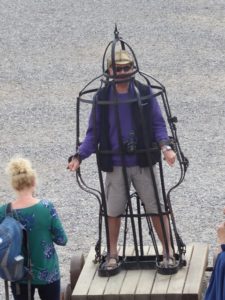 Dermot in the cage 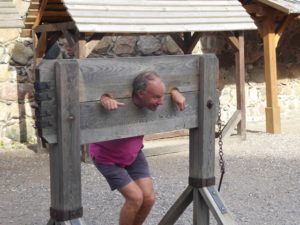 Lance in the stocks

Back on the bus at 5.30, it is only a 30 minute drive through to Vilnius, the capital of Lithuania. Our hotel is the Panorama Hotel. We have a quick check into our rooms but have to go almost straight back down to reception because Ieva has booked us a table at a traditional Lithuanian restaurant but they said that they would only hold the table until 7.00 and it is a 30 minute walk.

Our hotel is outside the main Old Town area near the railway station, so we have an interesting walk through the city gate and down the central street of old town to our restaurant. It is another popular restaurant and very busy so we are very surprised to be served extremely quickly. I choose a traditional dish called a Cepelain (Zepellin) which is a potato dumpling with a meat filling that is shaped like a Zepellin. They have a huge selection of different fruit wines – I had a raspberry wine that was very crisp and refreshing. Others had local beers including one that was a cannabis beer (there was also a salad that included cannabis seeds). 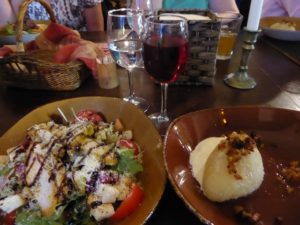 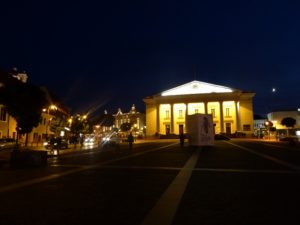 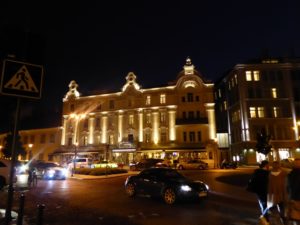 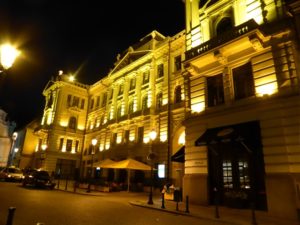 After the meal we were walking back to the hotel when Ieva showed us a local cafe famous for it’s cheeses and cheese dishes including a cheesecake with pieces of blue cheese in the middle. It was still quite early so we went in to try some (I’m not a blue cheese fan so I had a little tartlet instead) – the verdict ranged from delicious and interesting, to “I’m glad I tried it but won’t do it again’.

Gill and I were in bed relatively early but several of the others retired to the hotel bar instead. We noted that there are still quite a large number of smokers in this region but they are required to go outside as smoking is prohibited inside. We wonder what happens in winter when it can be as cold as -20C.