Why would you bother growing sweetcorn yourself when you can buy sweetcorn very cheaply at the supermarket at the height of the season? For me there is nothing like picking a cob straight from the garden, popping it in the microwave and eating it 3 minutes later. I always put a few plants in my garden each summer just for this simple pleasure.

Sweetcorn is easy to grow. I’ve never grown it from seed but seedlings from the garden centre seem to do well if you stop the birds from digging up the seedlings and remember to put out slug pellets to stop the slugs and snails from eating them. Plant them in rich well-drained soil with plenty of compost or mulch once the soil has warmed up – I plant mine at Labour Weekend (last weekend in October). There are all sorts of different varieties to try with white, yellow, orange, red or purple kernels; or combinations such as the yellow and white ‘Honey & Pearl’ varieties. 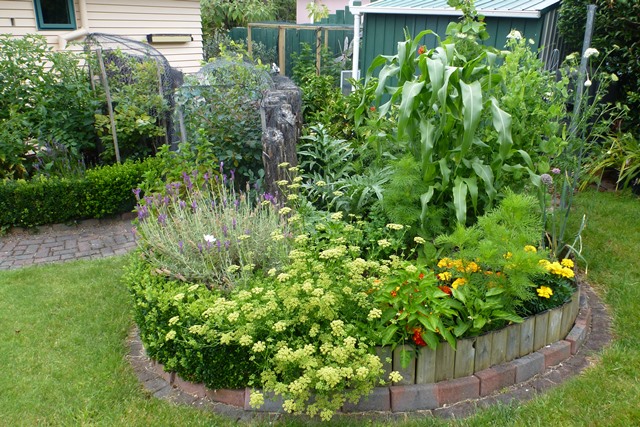 Plant sweetcorn in a group rather than a line

Be a bit careful where in the garden you plant them because they will grow tall and shade other plants – this can be good for lettuces that like a bit of protection from the sun. It is said that they are great companion plants with climbing beans because if you give them a headstart you can plant the beans in amongst the corn and let them grow up the strong stems. I did try that once but my beans were so rampant that they absolutely swamped the corn; even when I plant the beans nearby they still reach out and try to climb up the corn anyway but it is a bit more manageable. 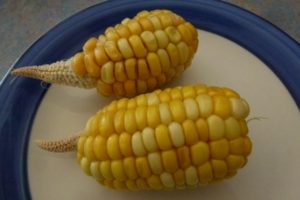 Sweetcorn is perfect in a small vegetable garden because they are better planted together in group, rather than in a straight line, to maximise the likelihood of pollination. Each individual kernel of corn must be pollinated, this occurs when the pollen grains from the corn tassels (male flowers at the top of the plant) fall on the sticky silks (or female flowers). Sweetcorn is wind-pollinated, so this summer pollination has been excellent! Last summer I managed to grow some little misshapen cobs that only had kernels on one side so they looked a bit like hedgehogs.

One tip I learned early on was how to tell whether the cobs were ready to pick without having to strip back the husks to look at the kernels: when the silks turn dark brown and start to shrivel, the kernels should be ripe. Check one cob to see that you’ve got it right before you pick a whole lot of them though. 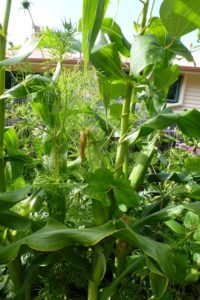 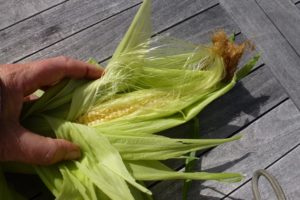 Pull back the husks to check your first one

There are all sorts of ways of preparing sweetcorn but for me the simplest is to put them (whole with the husks still on) into the microwave for 3 minutes on high (you may need to experiment depending on the power of your microwave or the number of cobs you put in). I then just peel back the husks and leave them attached to use as a handle while I’m eating the corn. Once you’ve microwaved them, it is also simple to just slice off the kernels to use in salads or to make corn fritters – my favourite brunch dish. Another favourite is to cook the cobs on the barbeque and then spread them with chilli butter. 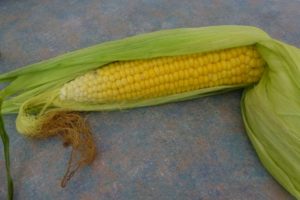 Cook in the microwave whole with husks on 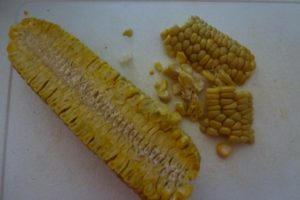 Slice off kernels to use in salads 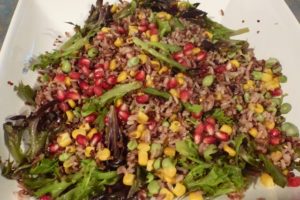 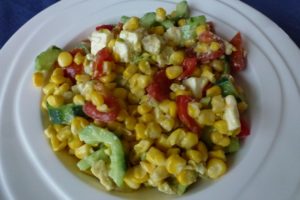 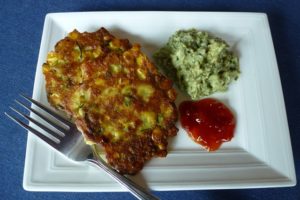