On my trip to the US for a conference in November last year my original flight was cancelled and I was rebooked onto a flight that arrived into San Francisco at 6.00am. This meant that I got virtually no sleep on the flight and then still had to cope with a full day ahead. It also meant that I had an unexpected day to spend in San Francisco before my conference started that evening. So what can you do in San Francisco in a day?

The previous year I had had a stopover in San Francisco and had explored the Union Square area and Chinatown. This time I was staying down near Fisherman’s Wharf so I thought that there would be plenty to keep me amused just mooching around the area. Places like Pier 39 were offering cafes and live entertainment, and perhaps I could do some window shopping.

After finally checking into my room (thankfully there was one available for me at that time) and sorting myself out, I set out to explore the area on foot – it was certainly good to stretch my legs after the flight. I went first to check out where the conference was being held (right on the water’s edge at Pier 27, The Embarcadero) and to see how long it would take for me to walk there. Then I followed a Fisherman’s Wharf self-guided walking tour map; it was a stunningly beautiful day and I couldn’t have asked for more.

I wandered for a while, enjoying the sunshine, and then decided to treat myself to an early seafood lunch at the Fog Harbour Fish House. It is upstairs at Pier 39 and I had a window seat looking straight out over the boats in the marina to Alcatraz Island. The crab salad was delicious and I lingered over a glass of wine, enjoying the glorious view. The antics of the Pier 39 K-dock sea lions kept me amused as well (when they weren’t just sunbathing).

Suitably fortified (or so I thought) I set off to explore Pier 39. I’m not a good shopper at the best of times although I can usually make a go of it when I am on holiday, but none of the shops had anything that would hold my interest. I watched some of the live entertainment for a while but I was really uninspired. I was tired and lacking energy but didn’t want to go to sleep because I wanted to acclimatise as soon as possible and I didn’t want to sit inside and miss such a lovely day. What was I going to do? 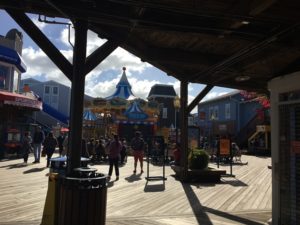 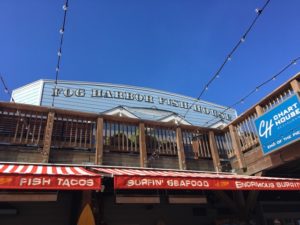 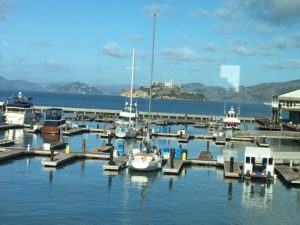 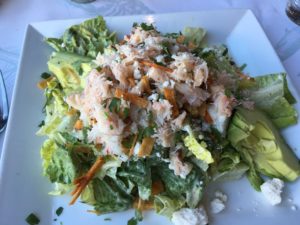 Then inspiration struck with a passing bus. I would go and do a Big Bus Tour. These are hop-on, hop off city explorer buses that take around the key sites of the city and you can get on and off as you please to explore what is at each stop or you can just sit on the bus for the full circuit and listen to the commentary. I have used them previously on trips to other cities such as London, Sydney, Shanghai, and Las Vegas, and found them to be a great introduction to a city and a way to get to the main sightseeing spots without having to negotiate public transport.

The Big Bus stand and starting point was nearby so I purchased a ticket and didn’t have long to wait before a open-topped double-decker bus arrived. It was a perfect way to spend a lovely sunny afternoon when lacking in energy. I sat on the bus for the full circuit, soaking up the history and stories of the city, and snapping photos to my heart’s content.

After the tour I sit in the sun and enjoy a hot chocolate and people-watching before I head back to my hotel to get ready for the conference opening event.