Having finally achieved my long-time dream of getting a home garden greenhouse, I realised that my decisions were only just beginning: now I needed to decide how to kit it out. When I ordered my greenhouse, I also ordered an aluminium and mesh bench to go down one side of the greenhouse and jumped at the chance when I was offered a wooden stand to put water reservoir tanks on. Great! I thought that would be pretty much sorted for what I needed. I couldn’t have been more wrong.

My greenhouse is the smallest in the range – just 1.9 x 1.9 x 1.9 (a 6 ft cube) – and there really isn’t a whole lot of room inside so you have to make every bit of space count. The aluminium bench took up more than a third of the space but didn’t meet my needs at all. It had three different levels but the top level was too wide for one of the pots I was wanting to put there but not wide enough for two, so there was a lot of wasted space. On the next level, although it was wide there wasn’t enough space sticking out from under the top shelf for the pots I wanted to put there (and not enough space underneath); and there certainly wasn’t enough height for my orchids in the bottom shelf. And the wooden stand took up another quarter of the greenhouse and there was a lot of unusable area underneath. Thankfully I was able to return these. 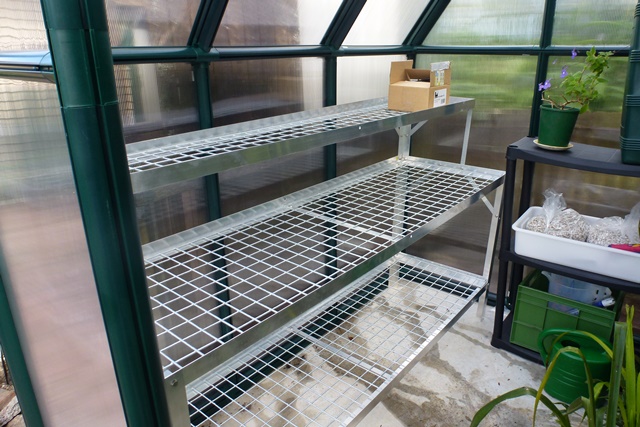 Aluminium bench took up a third of the space

I had been told of a lovely lady Bernadette who was more than happy to show people how she set up and used her greenhouse and I arranged to go and visit her one weekend. Her greenhouse is at least three times the size of mine but she is also very conscious of maximising every inch of ‘real estate’ for growing her plants. It was really great to see how someone else arranges their set up: she showed me shelving units that she’d got off trade me, stools from The Warehouse and a little cupboard from an Op Shop. She also showed me her set up of automatic watering containers (more about that to come in another post) and gave me lots of tips for operating everything to get the best from her plants, from growing medium to nutrient measurement to cleaning pots to growing tomatoes all year round. It really was inspirational and gave me so many ideas about how I could set my greenhouse up.

By now I had moved my orchids into the greenhouse and had set some of them up in an Autopot system so the first pressing need was to get a stand of some sort to hold the water reservoir tanks on; they need to be as high as possible but still allow you to get into them. I was also looking for tiered shelving units to put the pots onto. I did the circuit of Mitre10, Bunnings, The Warehouse and Storage Box looking for suitable items, even things that I could repurpose for the tasks but without costing a fortune. At The Warehouse I found a plastic shelving unit that had a few parts missing and didn’t have a box but that I thought was just what I needed – unfortunately it appeared to be the end of a line and they couldn’t identify what it was; and they couldn’t sell it to me if it didn’t have a barcode. Despite my attempts at persuasion, there was no barcode, so no possible sale! Somewhat frustrated I continued my search and eventually found an even better plastic shelving unit at Bunnings; this was also the end of a line and had no box but, in contrast, the sector manager offered me a heavily discounted price and it couldn’t have been easier. But still no luck with any tiered shelving.

Back home, I proudly took my shelving unit to the greenhouse and worked out the best arrangement and layout for it. I could separate it into two parts: one was the perfect height and size for two water reservoir tanks and with a single tier that I could put a pot on. I filled the water tank that I had from the starter kit I had purchased and set it up on top of the shelving; connecting it up to the pots that I had on the ground. Unfortunately when I came back in a bit later on I discovered that although it had seemed very sturdy, the top shelf was already starting to bow in the middle so it definitely wasn’t going to be strong enough to take two tanks of water. 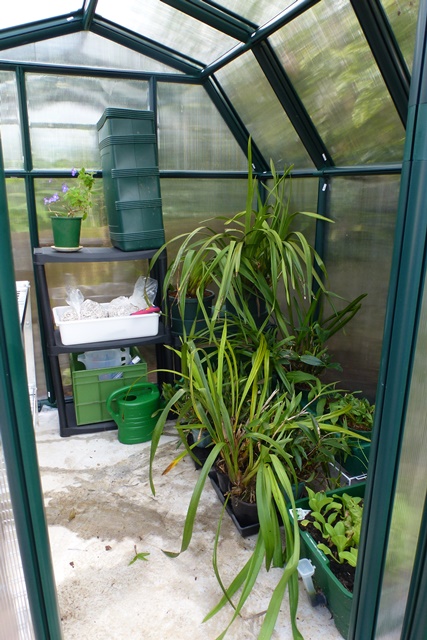 Plastic shelving starting to bow under the weight of water tank

Next step: Trade Me! Fairly quickly I managed to find a three-tiered plant stand that looked as though it would pretty much do the trick; and it was inexpensive so I bought two. Then what on earth was I going to use for the tank stand? It would need to be able to stand up to the wet, humid environment in the greenhouse. Bar stools were about the right height but I’d need one for each tank and there was a lot of wasted space underneath. Most shelves or tables were the wrong height or dimensions but eventually I found a hall table that was the perfect size, solid pine and painted glossy white – and he would deliver! When he turned up and offered to carry it inside for me I couldn’t bring myself to tell him that it wasn’t going inside the house but outside into the greenhouse. I praised the workmanship and have since bought a second one from him so I think he is pretty happy. 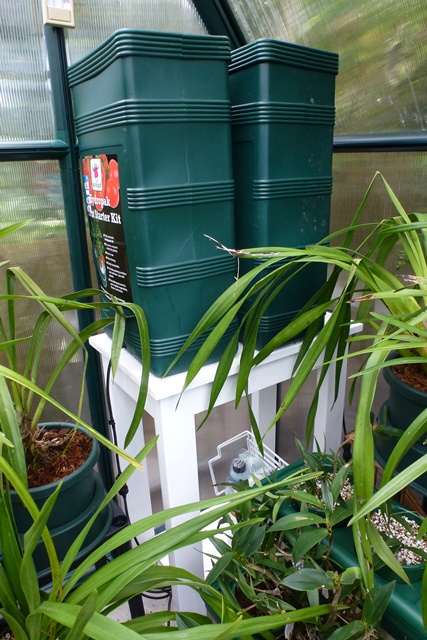 I’m now feeling pretty happy about my greenhouse kit out and that it allows me to maximise the use of the limited space. I’m thinking about perhaps getting some hanging baskets as well. I’ve brought all my orchids inside and am looking forward to thwarting the slugs and snails and actually getting to appreciate some flowers this year. I have them all set up along one side of the greenhouse and am trying to decide whether I will simply use the rest of the space to give tender plants like tomatoes, capsicum and eggplants a good headstart before I plant them out in the garden or whether I will try to grow some of them permanently in the greenhouse. 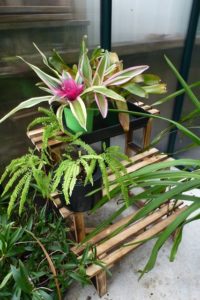 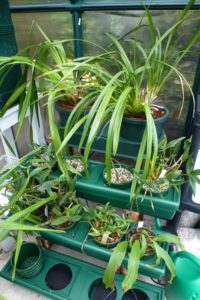 Fits planters if you tie them on 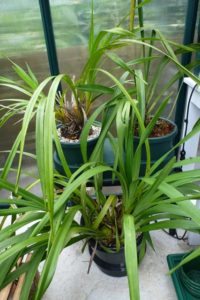 The other part of the plastic shelving