Making Apple Wine wasn’t as successful as my other efforts making feijoa wine and wine from white eating grapes. It has eventually turned out to be drinkable but a lot of hassle and heartache to get there and still not as I would have liked. I will share my experiences because there are lots of learnings for other budding wine makers.

My previous efforts at making wine have been based on the generic recipe and instructions for making fruit wine on the very helpful makewine.co.nz website. And they both produced good results so I will try that next time.

For the Apple Wine I used a recipe that made the most of windfall apples and purported to “produce a beautiful, dry wine that tastes fantastic when paired with fish or pork dishes”. I had masses of windfall apples from my neighbour’s tree that was badly infested with codling moth (we had taken part in a release of a new codling moth biological control but the tiny parasitoid wasp hadn’t yet brought the infestation under control) and I wanted to use them somehow.  I cut out all the rotten bits but the recipe said to leave on the skin and any brown (not rotten) patches.

Wash the apples and roughly chop into chunks, leaving on the skin and brown patches. Put the fruit in a large pan with the water and bring to a boil. Simmer for a further 15 minutes. 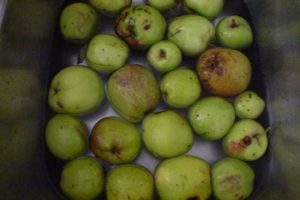 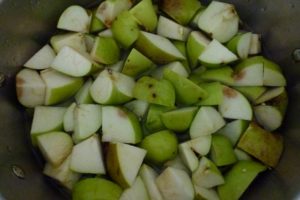 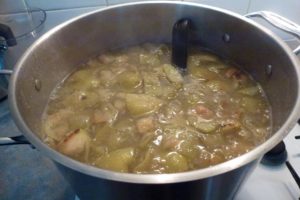 Put the apples and water into a sterilized fermenting bucket and add the sugar and citric acid. Stir to make sure that all of the sugar has dissolved.
Allow the liquid to cool to 21C, then add the yeast, yeast nutrient and concentrate. Put the lid securely on the bucket and leave the wine in a warm place for 24 hours. I ended up leaving this for 3 days (as per the other recipe) because it was fermenting so hard that it kept blowing the lid off the bucket. 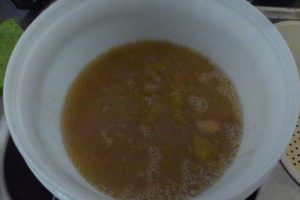 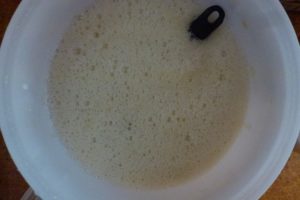 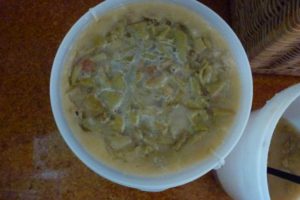 Pour the liquid into a sterilized fermenting jar (the recipe said not to strain at this stage but I did because there was too much solids) and fit an air lock. Leave to ferment for 4 more weeks.
You can see from the pictures that the ferment was still misbehaving, foaming up even as I was pouring it into the jar and then rather than settling down it kept on bubbling up through the airlock for a good portion of the fermenting time even though I kept cleaning it up and trying again. 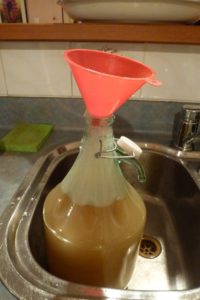 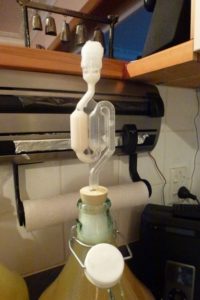 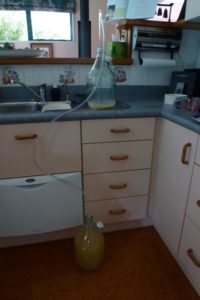 Transfer to another demijohn

Siphon the wine off into another sterilized demijohn, refit the air lock and leave to ferment.
Once all the bubbling has ceased, siphon off the wine into bottles, cork and leave the wine in a cool dark place to mature for at least 6 months.
I left the wine in the demijohn once it had finished fermenting because it was extremely cloudy so I thought I would wait for this to settle to the bottom. I left it to mature in the demijohn in a cool dark place for several months, checking it regularly to see whether it had cleared. Eventually after contacting makewine.co.nz (see below) I decided to bottle it anyway. 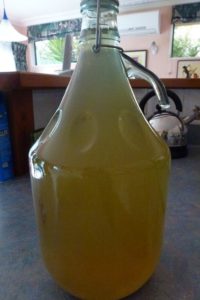 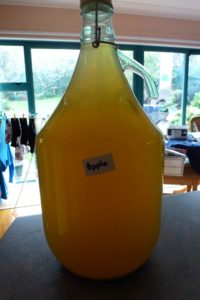 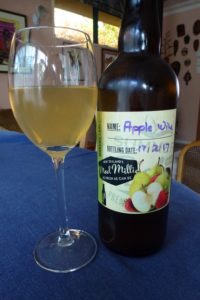 Karen at makewine.co.nz was extremely helpful when I asked for advice about how to remove the cloudiness – which most likely came from boiling the apples at the beginning.

If it is in part or in whole a pectin haze, finings won’t clear it.  You could try adding pectolase now, although it is apparently less effective post fermentation.  There is also no reason not to try finings, except to be aware it might not work. There is a way to test for pectin, if you wanted to try that.

According to this website (which I have generally found to have reliable info) boiling the fruit increases the chances of a pectin haze.  http://winemaking.jackkeller.net/problems.asp

Pectin Haze: The most common cause of a haze in wine is the presence of pectin, which forms gelatinous solutions in the wine. The problem is aggravated if the must is initially boiled to extract flavor, color or both. To check if a haze is pectin in origin, add 3-4 fluid ounces of methylated spirit to a fluid ounce of wine. If jelly-like clots or strings form, then the problem is most likely pectin and should be treated.

To treat the wine, for each gallon of wine draw off one cup of wine and stir into it teaspoon of pectic enzyme. Set the treated sample in a warm place (70-80F.) and stir hourly for four hours. Strain the sample through sterilized muslin cloth and add to the bulk of the wine. Leave the wine at 70F. for 4-5 days. The haze should clear. If it does not, strain the wine through sterilized muslin cloth and then through a vacuum-pumped filter. If it still does not clarify, the problem was misdiagnosed.

Pectin hazes can be prevented by adding pectic enzymes to the must 12 hours before adding the wine yeast. One teaspoon of enzyme per gallon of must is usually enough, but some musts require 1-1/2 teaspoons.

The best part of her advice was “Removing the pectin haze will be unlikely to have much effect (if any at all) on what the wine tastes like, so drinking as is, is most certainly an option“. I followed this advice, leaving the wine to mature another few months in the bottles just in case – with no effect on the cloudiness. It is a passable wine but I certainly think that next time I will try making apple wine using the generic instructions for making fruit wine that were so good for my other wine making efforts.