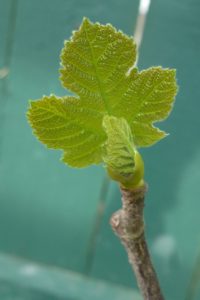 Roasted salmon in fig leaves with its amazing coconut aroma could be this year’s barbeque speciality (especially on my new Weber barbeque). It could even be a Christmas day special event if you want a change from more traditional fare.

If you have a fig tree and, like me, are impatiently waiting for this season’s fig harvest to come around, you may be surprised to discover that you can use the fig leaves in cooking as well. If asked what you can do with fig leaves, I would previously only have thought of Adam and Eve using them to preserve their modesty. Fig leaves were recorded as being used as a wrapping material for food as far back as the 3rd century BCE: they would preserve the leaves in salt to reduce the bitterness of the leaves and then wrap seafood or meats within the leaves to cook in the fire.

Today fig leaves are still used in Mediterranean cuisine, most commonly to wrap seafood for grilling or steaming. Apparently crushing the fig leaves releases scents of coconut, peat, vanilla, and green walnut. I’m not sure I could smell all of that but when used in cooking, fig leaves certainly give the cooked meat a somewhat smoky, fruity flavor, and a distinct coconut aroma. You can also use dried fig leaves to make a tea.

If the internet is to be believed, fig leaves are good for you as well:

Fig leaves have been used in ancient times to treat sore throats, warts, and to cleanse the kidneys. In 1998, the Diabetes Research and Clinical Practice published a study that showed the effects of Fig leaf consumption on type 1 diabetes. The study showed that patients who consumed Fig leaf with their breakfast had a lower blood glucose level after the meal and required less amounts of insulin. A 2005 study on diabetic rats that were given Fig leaves showed lowered oxidative stress and better antioxidant status.

Wash fig leaves and pat dry. I thought mine were quite stiff so I cut out the hard veins but I don’t think it would have mattered and it certainly made it more difficult to wrap them.

Squeeze lemon juice over the salmon fillets (add lemon zest as well if you wish). Wrap salmon in fig leaves (as many as you need to cover your fillets) and tie up parcels with string.

I roasted some fresh potatoes along with my salmon (they take about twice as long) and served them with fresh green beans. Both the salmon and potatoes make a delicious salad cold the next day. 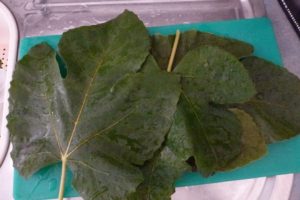 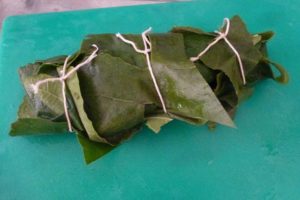 Wrap salmon fillet in leaves and tie parcel with string 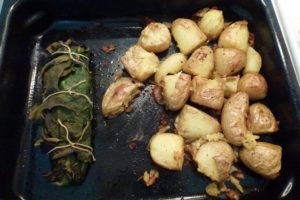 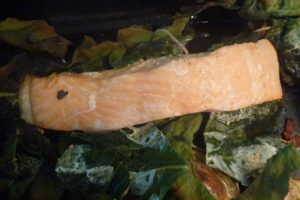 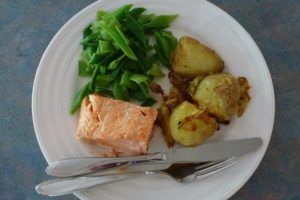 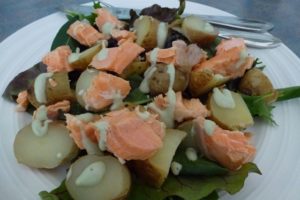 Serve cold as a salad