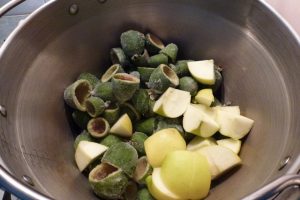 With food wastage coming to the fore, there is an increasing focus on using as much of our fruits and vegetables as possible so I decided to try making a cordial using feijoa skins.  I kept unblemished feijoa skins where I had scooped out the flesh to eat, and just put them in a bag in the freezer until I had a big bag full. I also used some windfall apples to complete the focus.

Usually I don’t worry too much about using every part of my produce because more often than not I have a glut and am trying to use them up rather than eke them out. However I do freeze and/or preserve everything I can. Anything that doesn’t get used is put in the worm farm or compost bin to go back into making the garden productive.

I used the same recipe as I regularly use for making cherry guava cordial. It doesn’t matter how much fruit you start with because you simply adjust the amount of sugar you use to match the amount of juice you get from the fruit.  I started with a good colander-full of feijoa skins and 2 roughly chopped apples.

Place fruit in a preserving pan and barely cover with water.
Simmer until the fruit is very soft and all juice has been extracted.
Strain through a jelly bag and allow juice to drain – do not squeeze the bag.
Allow 1 cup of sugar to 1 cup of juice.  Put juice and sugar in a pan and bring to the boil.

For 1.5 litres of liquid, I added 1 tsp citric acid (a natural preservative that also enhances flavour) and 1 tsp tartaric acid (used to give a sour taste and is also an antioxidant).  If you are intending to use the cordial within a few days you can omit these but make sure you store it in the fridge.

Scoop off any foam that forms on the surface. Pour into hot sterilised bottles and seal. Mine made about 4 litres. 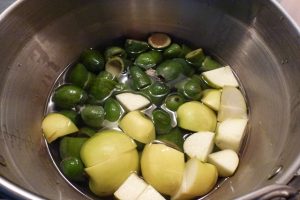 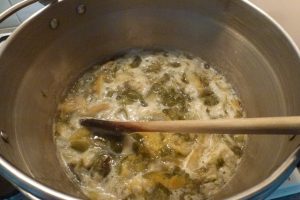 Simmer until fruit is softened 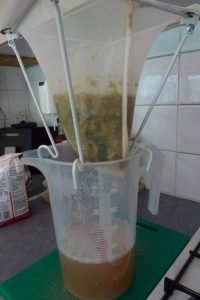 Strain juice through a jelly bag 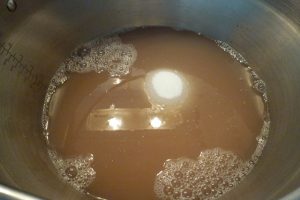 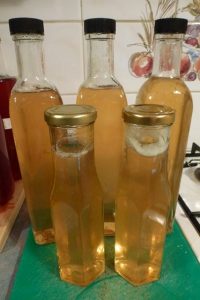 Serve diluted: 1/3 cordial to 2/3 water or soda water (or to taste).  Try using it to make cocktails. Perfect to include in a gift hamper or take as a hostess gift.