Back in 2015 I first wrote about growing bananas at home and how I had got some ladyfinger banana suckers from my friend Michele. Three years on I have finally seen success: this year I have 3 bunches of bananas. 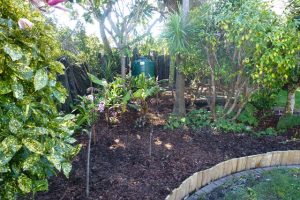 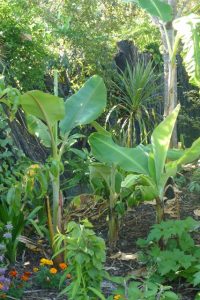 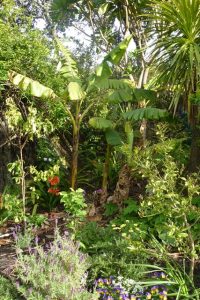 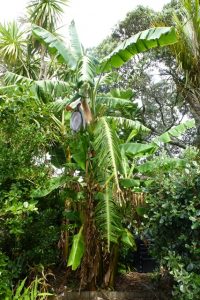 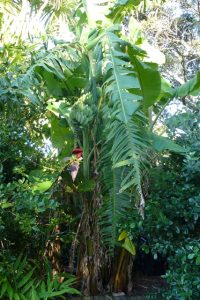 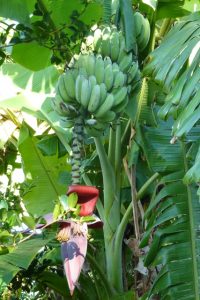 I had been beginning to wonder whether I would ever see success with my bananas. I had taken care to provide water and nutrients. Soil moisture is apparently one of the most important factors: lack of water at any time may cause a reduction in fruit numbers and size. Even though soil moisture is important, soil drainage is just as important, sloping land will help with this. Bananas should ideally be planted in slightly acid soil. I have all of this. Sunshine and warmth on the trunks are important for fruiting and I was fairly sure I was getting enough, especially as the banana palms grew taller. I didn’t see any flowers in spring and had resigned myself to waiting another year for fruit.

Then in summer I was very surprised and delighted to see not just one but 2 banana flowers. One of these was already quite advanced into forming a bunch of bananas (it must have flowered in spring but was quite hidden) while the second was still an early flower. I then realised that I really didn’t have any idea what to expect – how long do bananas take to develop and ripen? By March I had 2 decent bunches of bananas forming – was I supposed to cover them to help them ripen? would I need to keep the birds and any other pests off them? One of the bunches was very high up and I was going to have problems reaching it even with a ladder, so I wasn’t going to be able to easily tend to that bunch. 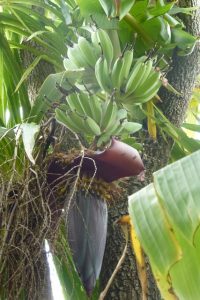 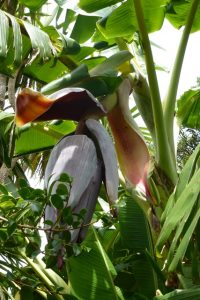 Then a friend told me that someone they knew ripened their bananas in the greenhouse. So I managed to cut down the highest bunch and put it in my greenhouse. Over a period of weeks the bananas started to turn yellow. I had been concerned that I would get a hundred bananas ripening at once but they seemed to space themselves out quite nicely. I did get 50 bananas ripening together at the end – thankfully they freeze well (see freezing fruit). I grouped them into lots that were roughly the same size as 2 standard bananas, peeled and sliced them, and packed the pieces into ziplock bags for the freezer. 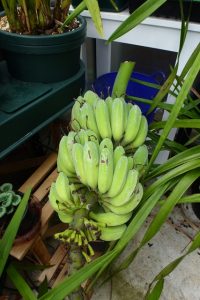 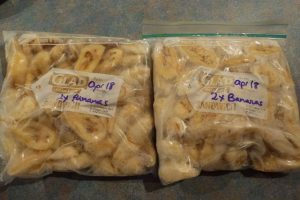 These bananas worked really well for baking but weren’t good for caramelizing to have with pancakes – they were still quite mealy and not sweet. I think that even though they had coloured up and apparently ripened, I had taken them off the banana palm too soon before the sugars had formed properly. This was reinforced by the fact that my second bunch of bananas was still on the palm and not yet ripening in May (as was another bunch I spotted in the neighbourhood on one of my walks). I have since read that you should leave them on the palm until at least one starts to turn yellow before bringing them into a greenhouse to finish ripening. This will allow them to fatten up and develop the fruit sugars so that they have good flavour.

Another banana palm produced a flower much later again so there doesn’t seem to be a ‘season’ for fruiting. I don’t know whether this bunch will manage to ripen before it gets too cold in winter.

Some of my favourite recipes to make with bananas: