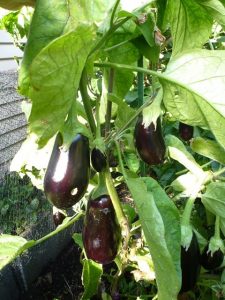 I have previously posted about my variable success growing eggplants or aubergines, and how some years I throw them out in disgust at the end of the season after only managing to produce one or two eggplants. Each year I plant them again in the seemingly vain hope that I will get a bumper crop. I’ve tried them in different positions in the garden, in self-watering pots, in my glasshouse, and sometimes achieved a reasonable harvest. This summer though I hit the jackpot! I was later than usual planting my veggie garden after being away on holiday and decided to spend a bit more to get a grafted plant so that I wouldn’t miss any of the growth season. Then it ended up being the hottest summer on record (I did remember to keep watering) – and my plant absolutely loved it! I was harvesting large professionally-grown-looking eggplants in December and will certainly be growing eggplants again in the hope of repeating this success.

It was such an unusual experience to have to rapidly find as many different ways of using eggplants rather than dreaming and planning about what recipe I will make when I finally get a harvest. One bonus discovery was that it is relatively easy to freeze them for use later in the year. I peeled them the first time but I don’t think I will do that again. Simply cut them into approximately 1cm slices and bake at 180C for 15-20 mins. Once cooled put the tray of eggplant slices into the freezer and allow to freeze, then put them into a bag for free-flow use later. Eggplant need to be cooked before you freeze them – you can blanch the slices in water but I find baking them to be much simpler. 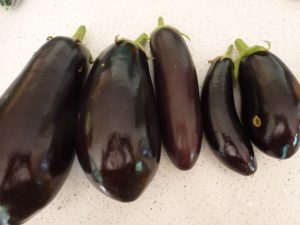 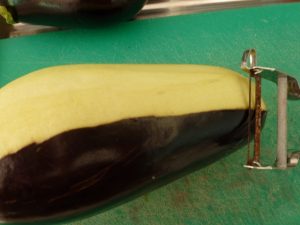 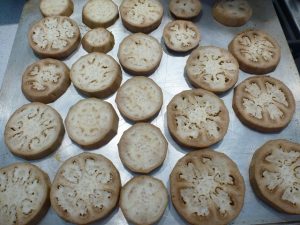 Here are some of my favourite eggplant recipes: (for those that I haven’t posted yet I will add the links as I do)