This week’s feature artist is a little different in that I haven’t had the privilege of calling Barbara Wilson a friend or colleague – but I wish I had. I have met Barbara though and I wanted to share her story with you as she is truly inspirational. Barbara turns 90 this year and is still teaching spinning and weaving.

Barbara’s story is even more inspirational than her being an award-winning textile designer and artist (although that is inspiring enough). She has also had to overcome terrible personal tragedy and great loss, and rebuild her life before she found her crafting passion. Her philosophy is to ‘love what you do. Having a passion is like having a dream, it feels like you never work a day in your life’. But at one point she felt like she couldn’t go on. 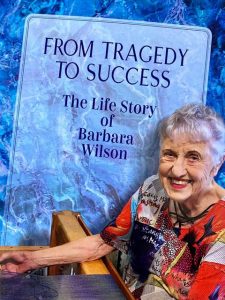 She has recently written a book ‘From Tragedy to Success’ with the help of Forget-Me-Not Life Stories, that details her amazing journey (see details at the bottom of this post).

“I wrote the book because I wanted to try to encourage people out there who have had lots of things happen to them.”

In 1960, when Barbara and her husband were returning home one night, a car crossed from the opposite side of the road hitting them head on. Her husband died instantly and Barbara went through the windscreen, ending up in hospital with two broken arms, completely losing the use of both hands. She was just 29 years old with three young children aged nine, seven and five. Her life had been shattered and she felt it was over. 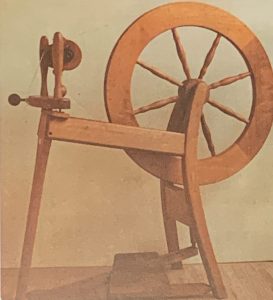 She made the courageous decision to rise above the tragedy and physical injuries. Barbara re-married in 1962 and, while on their honeymoon, they stayed with a friend in Christchurch who was a spinner. The friend thought that spinning wool could be good for Barbara’s hands so they bought a spinning wheel and took it back home.

“And of course it was good therapy for my hands. You can actually do it if you’ve got the determination to do it.“

This was the beginning of a new life that included starting a spinning group in Matamata, joining the Waikato Spinning Weaving and Woolcraft Society, and being part of what became an emerging industry of wool fibre, spinning, knitting and hand weaving. Barbara set up a weaving loom in her garage and started creating her designs, including fashion wear. She also started winning many fashion awards, including Waikato Designer of the Year for Handcraft Fashion and a finalist in the Benson & Hedges Fashion Awards.

Barbara’s spinning and weaving have taken her all around NZ and the world many times over in the last 40+ years. I met her at a craft expo a couple of years ago and bought one of her stunning cobweb scarves that I absolutely love. In fact I loved it so much that I bought a box-full of kitset scarves to make myself. The scarves are made from NZ merino wool, hand dyed silk, combined with all sorts of colourful, textured fibres and ribbons. 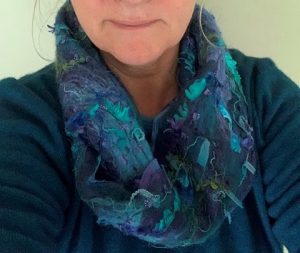 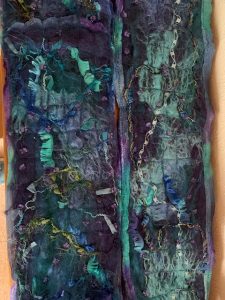 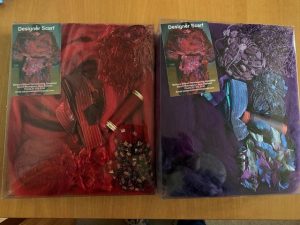 Barbara tells me that during COVID19 lockdown she made 14 cobweb scarves. “When finished I wore one out for dinner with grand daughters and sold it off my back.”

Barbara is still living life to the fullest although perhaps a little less in the fast lane than before: “I’m living in a retirement village over the road from the Mount Beach and it is like living in a Tourist Resort. Everyone who visits me wants to come and live here… it is fantastic.”

Copies of the book are available for $40 plus postage from Barbara Wilson on email barbarawilsonnz@gmail.com or phone 07 575 2193.