I recently visited Sanctuary Mountain Maungatautari in the Waikato District and was privileged to see some of New Zealand’s wildlife treasures up close and without a fence between us.

Sanctuary Mountain was first conceived in 1998 by a Waikato farmer who had a mountain on his property with remnants of original native bush that had escaped logging and clearing. It had been recognized as a reserve for a long time but he had a dream to put a predator-proof fence around the mountain that could keep out even baby mice – most people thought he was mad! But he persisted and worked with scientists to design a fencing system that would work.

In 2001 a Trust was formed by landowners, local iwi and residents to create a mainland ecological island around the 3,400ha mountain with a 47km pest-proof fence (one of the longest in the world). The fence has a special mesh that extends down into the ground, and has a seamless metal overhang to stop any predators being able to climb over it. There is also an electronic alarm system that alerts the rangers of any breach of the fence. Once the fence was completed in 2006, a massive eradication process was undertaken to remove all pest mammal species including hedgehogs, cats, Norway rats, ship rats, stoats, ferrets, weasels, rabbits, hares, possums, deer, pigs and goats. 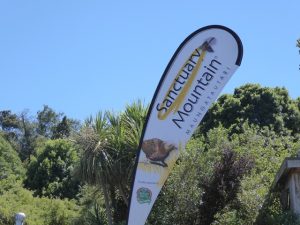 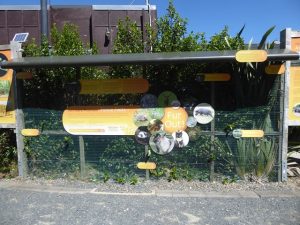 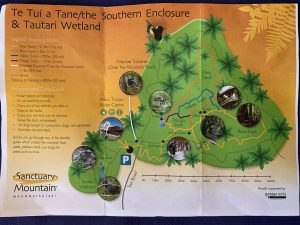 We had booked a tour into the newest enclosure: the Wetlands, which is home to tuatara and takahe. Our guide takes us down across the paddocks to where we enter the enclosure through double doors to make sure we don’t let anything in or out. 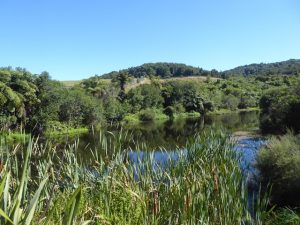 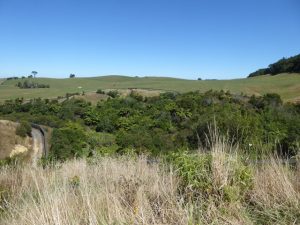 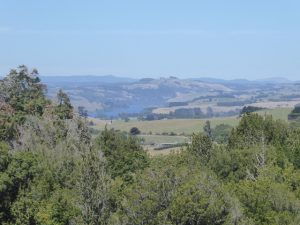 In the Waikato area

Takahē are large flightless birds endemic to NZ. After being presumed extinct for nearly 50 years, the takahē was  rediscovered in 1948 in a remote valley high in the tussock grasslands of the remote Murchison Mountains, above Lake Te Anau in Fiordland. This rediscovery launched NZ’s longest running endangered species programme. Today there are nearly 450 birds and they are now classified as Threatened – Nationally Vulnerable rather than Critically Endangered.

We are so privileged to be able to see a pair with a young chick about 7 weeks old and watch them feeding from only about 3 metres away. They are becoming acclimatised to our guide’s voice but we are very careful not to make any sudden movements or loud noises that might startle them. They usually eat the base of grasses and tussock (we see lots of evidence of where they have been foraging) but the sanctuary also provides special pellets to make sure they get all the nutrition they need.  The parents both feed the chick, who also figures out how to get at the pellets itself. The male is very protective and makes loud booming noises when he senses any danger. There are also another pair and chick in the Wetlands but we don’t see them this time. 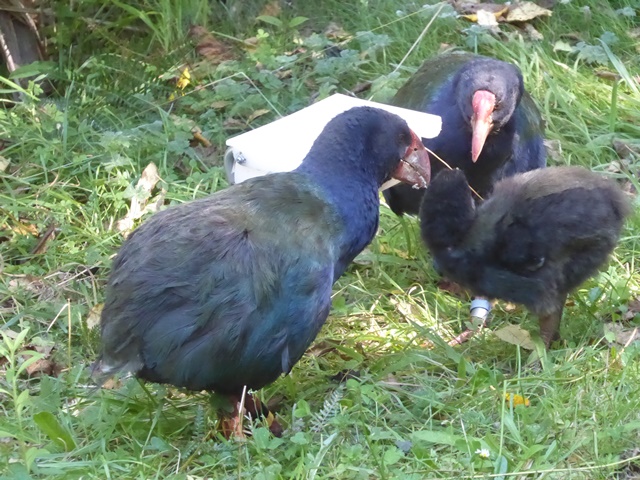 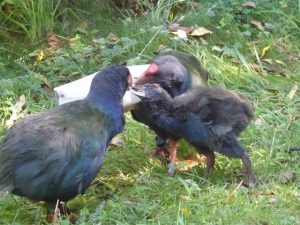 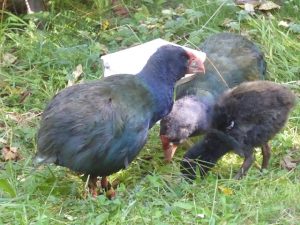 Tuatara are rare lizards found only in New Zealand. They are the last survivors of an order of reptiles that thrived in the age of the dinosaurs. The tuatara was one of New Zealand’s first native species to be fully protected by law but now survive only on offshore islands where pests have been eradicated. Twenty tuatara were released at Sanctuary Mountain and there is evidence that numbers are increasing. There is a purpose built area within the Wetland enclosure for them. We are lucky that it is a fine day and not yet too hot so we see 5 tuatara out sunning themselves on the rocks.

Adult male tuatara measure up to about a half metre in length and weigh up to 1.5 kg when fully grown. The male has a distinctive crest of spines (tara) running along the neck and down the back, which he can fan out to attract females or when fighting with other males. Tuatara have one of the slowest growth rates of any reptile, and they keep growing until they are about 35 years old. A tuatara’s average life span is about 60 years but they probably live up to 100 years. 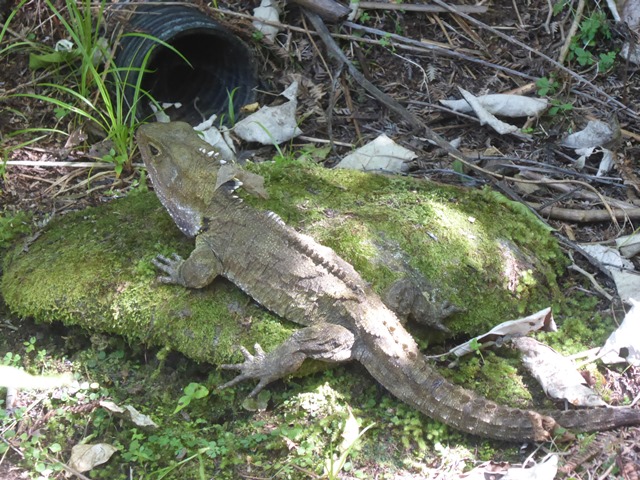 Whilst we are in the wetlands we meet some volunteers who are setting pest monitoring stations that have a bait and ink pads inside so that they can see the footprints of whatever goes inside – thankfully only a skink has visited the ones we see.

The volunteer also tells us that there are plans to introduce kākāpō. The kākāpō is a nocturnal, flightless parrot. It is critically endangered with only 206 birds alive and one of New Zealand’s unique treasures. There has to be a lot of preparation to be able to introduce the kākāpō because although they are flightless they are strong climbers and can easily climb OUT of the enclosures that are meant to stop things getting IN. They learnt this during a visit by Sirocco who is NZ’s official Spokesbird for conservation. Sirocco is a bit of a media superstar who found global fame when he was filmed ‘shagging’ Stephen Fry’s cameraman.

Sirocco was hand-reared as a chick after a respiratory illness but became imprinted on humans as a result. He seems to prefer humans to his own kind and living in the wild. This made him a perfect ambassador for his species, allowing people to meet a kakapo up close – unfortunately I haven’t yet had this privilege. The volunteer told us that Sirocco was perfect to test possible fence enhancements and he thought it was a great game to climb over as quickly as he could. Apparently when they finally found a version he could get over, he threw a tantrum ‘like a toddler in a supermarket’. 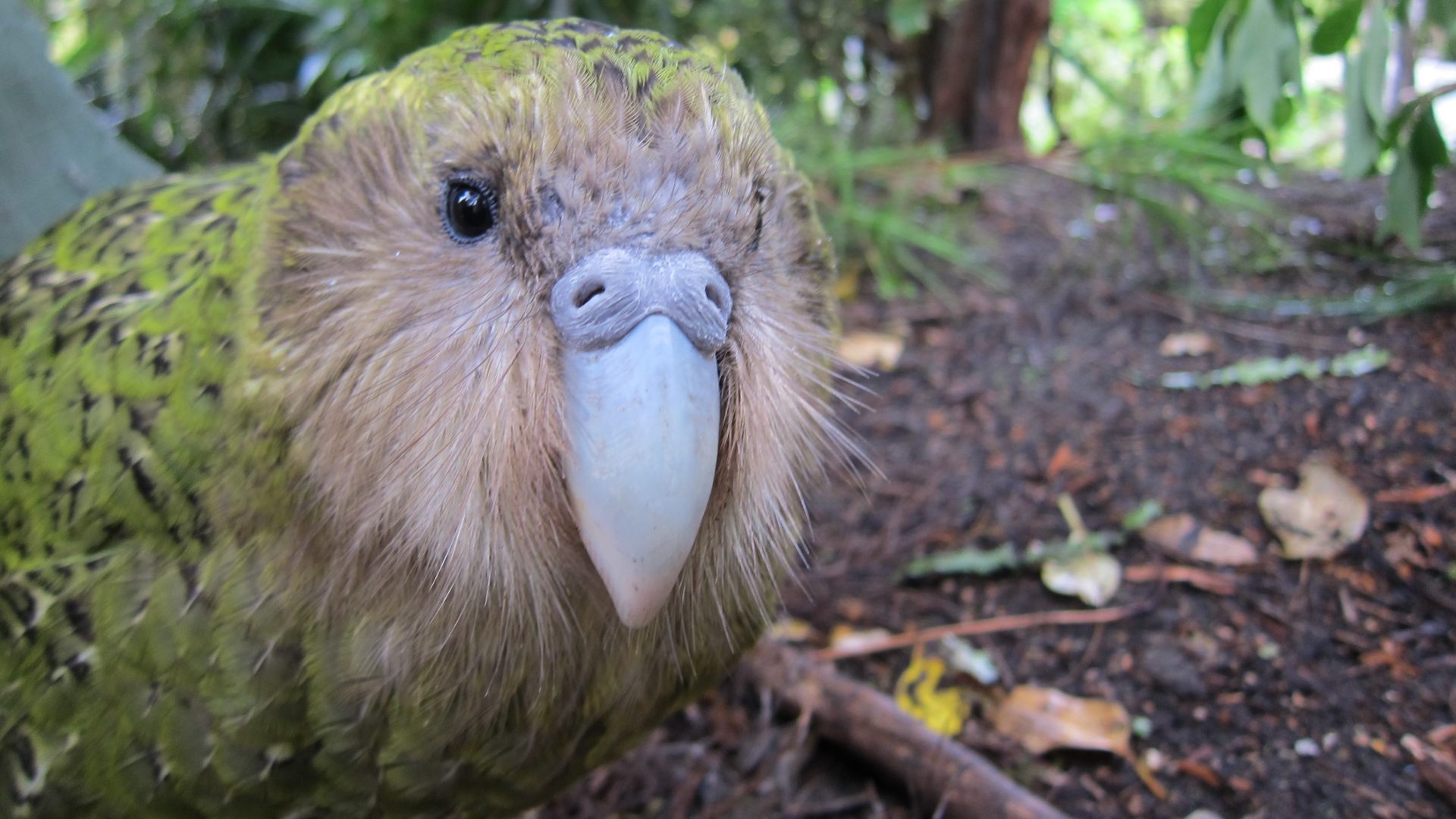 Sirocco (from his official site)

After some lunch we went for a walk in the Southern Enclosure where there are numerous tracks throughout the area. There are some original trees in amongst the regenerating bush and we are able to see some magnificent specimens of Rimu and Miro, as well as some of the other iconic NZ species such as the Silver Fern and Nikau palms.

It is a humid 28C and there is a bit of a walk through exposed countryside to get to the entrance of the enclosure, but once in the bush it is lovely and cool. The birdlife is astounding! Almost immediately we hear the raucous sound of the kaka (a large endangered parrot endemic to NZ) – such a treat. As well as the more common tui, kereru (wood pigeon), korimako (bellbird), tauhou (silvereye), and piwakawaka (fantail), we can hear the hihi (stitchbird) and I even get a glimpse of a tieke (saddleback). The curious toutouwai (North Island robin) often flies down to see what insects we have disturbed. There are supposed to be kokako in the enclosure but unfortunately we don’t hear them in the area we walk around – their call is hauntingly beautiful when you do hear it.

I was also disappointed that the Lookout Tower was closed as well as it would have been amazing to be right up in the canopy with the birds. I will definitely have to go back again. 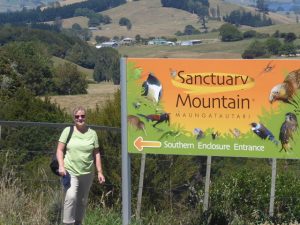 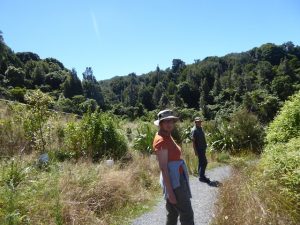 Heading down to the entrance 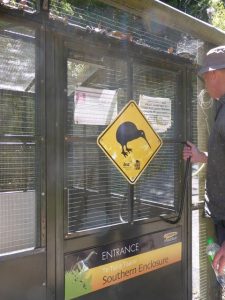 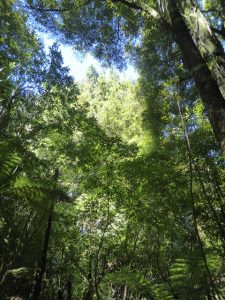 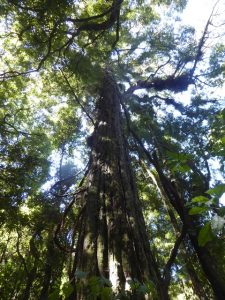 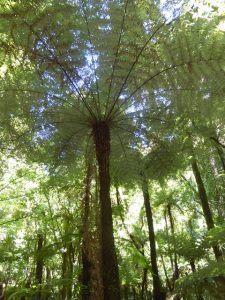 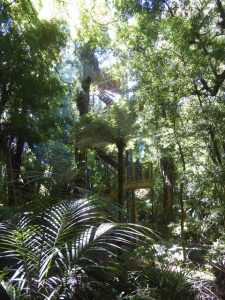 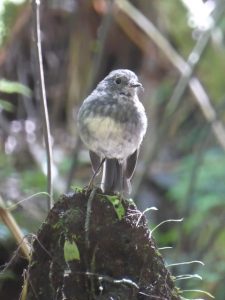 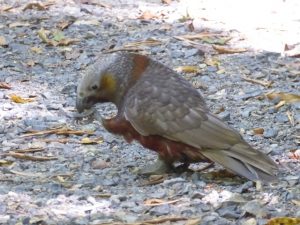 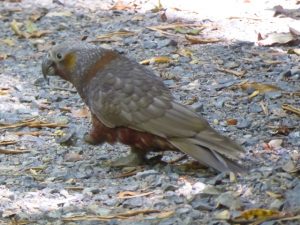 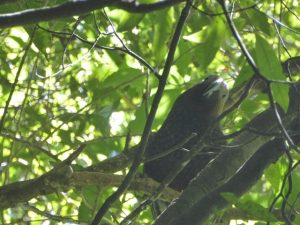 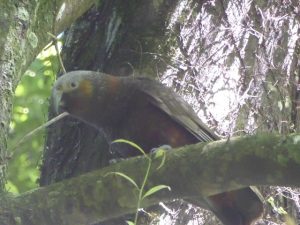