Winter is a great time to go stargazing and choosing a time when there is a new moon (and clear skies) maximises the chance that you will see the stars. And if you are far enough south (or north) then there is always a chance that you might be able to see an aurora as well. I have been fortunate to see the Northern Lights (Aurora borealis) on my trip to Greenland but I am still keen to see the Southern Lights (Aurora australis) as well. So, with friends Margot and Chloe, I headed down south for some stargazing: a dark sky experience. 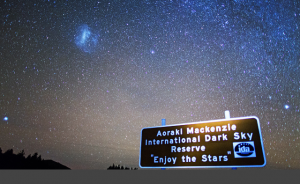 The Aoraki Mackenzie International Dark Sky Reserve is one of only 18 certified International Dark Sky Reserves in the world and one of only two in the Southern Hemisphere (the other is in Namibia). It is based in the centre of the South Island of New Zealand and encompasses the areas around Lake Tekapo, Lake Pukaki and Aoraki/Mt Cook National Park. Within this reserve is New Zealand’s premier astronomical research centre, the Mount John Observatory.

We carefully selected the time around the new moon and allowed ourselves 5 days to maximise our chances of having clear skies. Our destination was the township of Tekapo on the shores of Lake Tekapo where we had rented a holiday home. We flew into Christchurch and hired a car for the roughly 3 hour drive through to Lake Tekapo, although we decided to take the Scenic Inland Route and stopped for lunch on the way. It ended up taking us a lot longer than anticipated because the road was closed half way through so we had to go a long way off track to rejoin the road through to Tekapo. 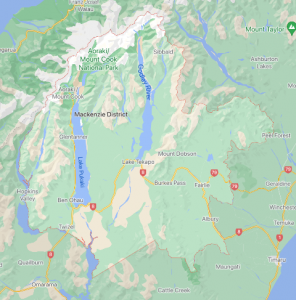 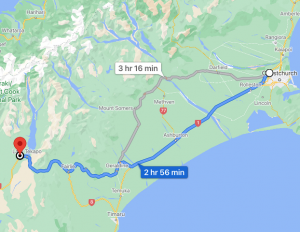 There are several different options for stargazing from Tekapo. We chose two of these: the Dark Sky Project’s Summit Experience and Tekapo Springs’ Soak in the Stars. These are both excellent tours with the Summit Experience giving a more scientific approach and the chance to visit the observatory and look through lots of telescopes whereas the Soak in the Stars combines an introduction to the stars and lying in the hot pools looking up at the stars and listening to all sorts of stories about them.

We had booked the Summit Experience for our first night. It was a beautifully clear day as we drove to Tekapo but the clouds started rolling in as we got closer to Tekapo. When we arrived at the Dark Sky Project we discovered that the road up to the Mt John Observatory was closed due to ice but if there weren’t too many clouds they would take us to the private Cowan’s observatory instead. We had just enough time to drop our bags at our accommodation, pull on multiple layers of warm clothing so that we resembled ‘Michelin Men’ and race back down to the meeting place – only to discover that it was too cloudy. We had the option of viewing the stars via their indoor multi-media experience or rebooking for another night. We had booked at the Hot Pools the following night so we rebooked for the night after and settled for wine, nibbles and then dinner at a Chinese restaurant (after removing many of the layers of clothing). 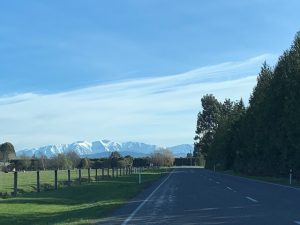 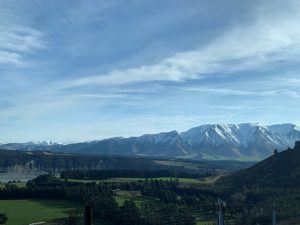 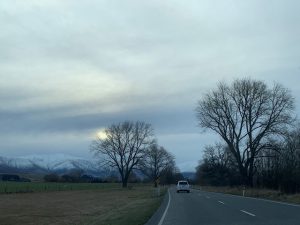 Tekapo Springs’ Soak in the Stars

The following night we arrived at the Tekapo Hot Springs at 8.30 (after the main pools have closed) for our Soak in the Stars experience. The evening is in two parts: one a more formal introduction to the night sky and the second part in the hot pools. It is too cloudy when we first arrive so we have a Virtual Reality tour of the sky and its constellations – this is okay when there isn’t any alternative but I found the headset heavy and uncomfortable and the images were a bit blurry. For me the most enlightening part was seeing how the stars rotated around the south celestial pole and being able to understand more about their changing positions in the night sky.

Then we were given towels and bath robes and headed to the changing rooms before going out to the hot pools. This was a bit challenging because it was very cold and there were only red lights for us to see by, but we followed single file down the ramp into the hot pool (38.5C) and were absolutely delighted to see that the skies had cleared. We were then each given a floating ‘hammock’ so that we could lie back at look up at the stars. For the next hour or so we listened to our ‘guide’ tell us stories about the various constellations and galaxies and how different cultures around the world described them, using his laser pointer to help us identify the key stars. We learnt some basic navigation skills – how to find due south using the Southern Cross and the Pointers. Saturn and Jupiter were in the sky also and at the end of the night they set up a telescope so that we could see these more closely, including Saturn’s rings and some of Jupiter’s moons. 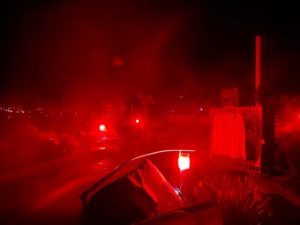 Soak in the Stars 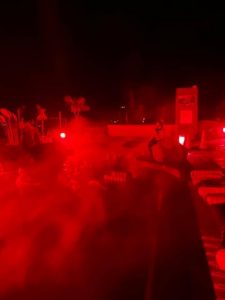 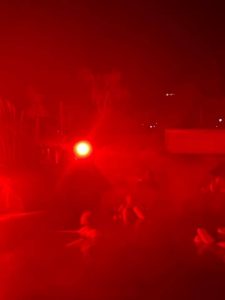 At 6.00pm the next evening we rugged up again in all our warm gear and headed back to the Dark Sky Project with our fingers crossed that the skies would stay clear. We were in luck – the tour to the Mt John Observatory was going ahead. To add to our already multiple layers of clothing we were all given gigantic Antarctic jackets to put over the top, and our own little red light torch. Then we were bundled into a bus and driven up the hill to the observatory. From a certain point no white light was allowed at all as it would upset the sensitive astronomical equipment – this also meant that for the last part of the drive even the headlights were turned off!

We were grateful for our gigantic jackets as we were going to be standing around outside and it was freezing and with a wind chill factor that meant it was well below 0C. With clear skies and being on the top of the mountain we really felt we were up in the stars – it was spectacular. One of the astronomers gave us an excellent overview of the night sky, including helping us to understand the complexities of measuring distance in light years, that two stars apparently close together could be in fact further apart than ones on opposite sides of the sky, and that we were seeing how the stars used to be rather than how they are now – somewhat mind-blowing! There were 4 telescopes (one in a dome and 3 free-standing) and 3 astronomers so we were divided into groups and rotated around the telescopes as they were focused on different things including Alpha Centauri (actually 2 stars), the Tarantula Nebula in the Large Magellanic Cloud, and different views of Saturn and Jupiter (seeing the bands on Jupiter’s surface). 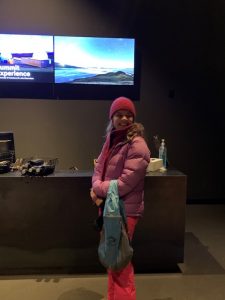 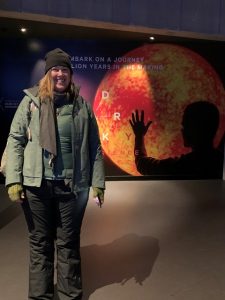 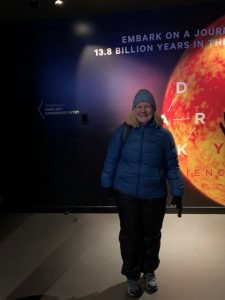 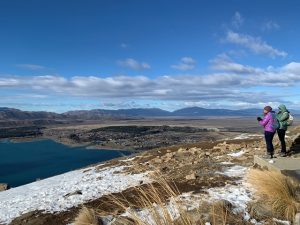 Tekapo from the Observatory 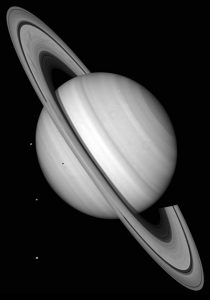 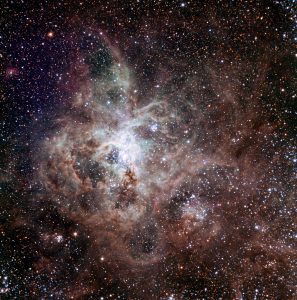 Both of the Stargazing experiences were great in their own way and I was glad we did them both. There was obviously some overlap in describing the night sky but I found it was good to reinforce what we had learned previously and be shown things in different ways. Sadly we didn’t get to see the Aurora – that would have made it absolutely perfect.

Giving yourself several nights for available for stargazing is definitely worthwhile if you want to see the real thing (rather than the virtual experience). The Dark Sky Project is very flexible about rebooking or refunds and if the weather is good they have several sessions operating throughout the evening/night. We were very lucky with our experience getting the best weather they had had in weeks. The day (and night) after our tour were extremely windy and I certainly wouldn’t have wanted to be up there trying to stargaze.

On the day that we left there was heavy snow falling and (thankfully after we had driven out) there were many road closures – there wouldn’t have been any stargazing for several more nights. We were delighted to have experienced the snow but equally delighted that we managed to get home without any mishaps on the road. As Aucklanders passing through, the snow made the area into a magical wonderland and it was a fitting end to our sojourn in the south.

Our daytime adventures are covered in other posts. 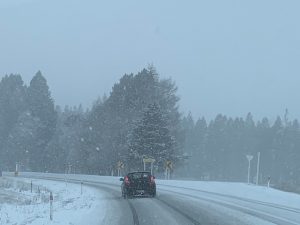 Snow on our way home 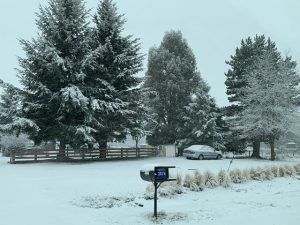 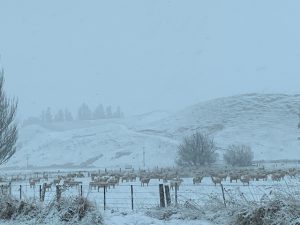 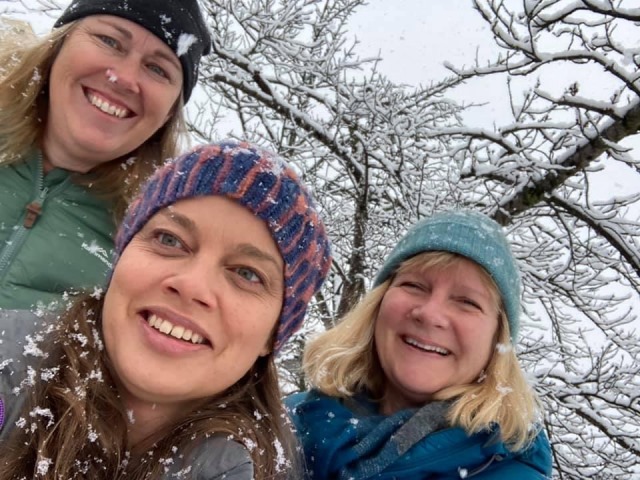