I absolutely LOVE ginger and go through large quantities in my cooking – savoury, sweet and even drinks. For some reason I had always just assumed that it was one of those exotic spices that you had to import without even contemplating that I could grow ginger at home myself. Then I saw some at the local garden centre and knew that I had to give it a go.

Ginger (Zingiber officinale) is a tropical plant but it can be grown in a greenhouse or indoors and outdoors in warm spots outdoors from Auckland northwards. It doesn’t like full sun and must have good drainage yet not dry out over summer. I have a lot of places that don’t have full sun but with heavy clay as my foundation the drainage was going to be a problem. Then I realised that I had a half wine barrel that I could repurpose as a container for growing ginger in and found a position for it in part-shade.

I filled the wine barrel with container mix and lots of compost and sheep pellets … and planted my ginger. The best containers for ginger are at least 30cm deep, and you plant the ginger about 5cm down with the buds facing up. I watered my ginger religiously over the summer and last year I managed to harvest small amounts without digging it all up. I left it in the container over the winter (discovering along the way that it does die down) and hoped that it would survive without rotting to sprout again in spring. 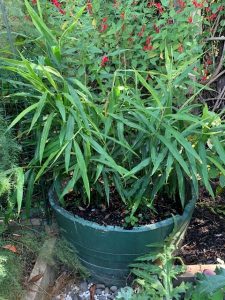 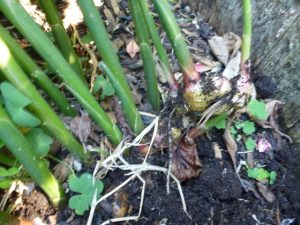 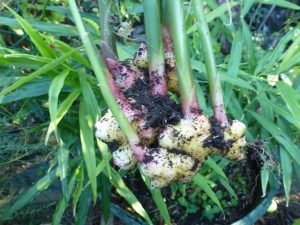 There are so many things I want to try making now that I have my own ginger supply but so far have just put it all in the freezer and use it as I need it. I would like to try crystallising it and to dry some to grind it into powdered ginger as well. You can grate it or blitz it in a food processor and put it into a jar, cover it with cider vinegar, and then keep in the fridge for easy use in cooking.

Eventually the ginger started sprouting again and really seemed to take off this last year. I gave it some more compost and sheep pellets and watched it spread across the wine barrel, looking very healthy. When it died down again at the end of autumn I decided that the time had come to reap a decent harvest. As it had over-wintered well last year I didn’t dig it all up but broke off big pieces of ginger root leaving a solid core behind. 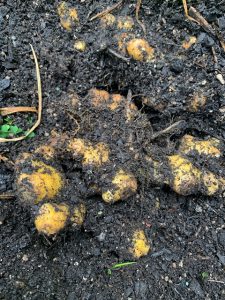 Ginger after tops have died down 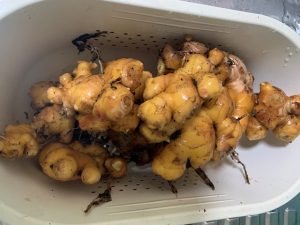 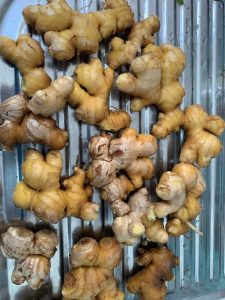 Ginger is used for both culinary uses (providing spice to many dishes) and for a wide range of medicinal purposes. “It has antiemetic (reduces nausea and vomiting), anti-inflammatory, antiplatelet (prevents blood clots), antiviral, antispasmodic, antioxidant, antibacterial and antifungal properties, among others. It is also an effective treatment for stomach cramps, coughs, chest infections and stuffed noses. As a circulatory stimulant, it also helps to carry other herbs throughout the body, boosting their effectiveness. Ginger and feverfew taken together, for example, have been shown to be effective against migraines. Its anti-inflammatory actions can also help reduce pain and swelling of those suffering from osteoarthritis.”

Some of my favourite ginger recipes: 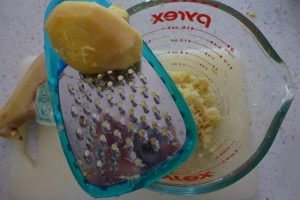 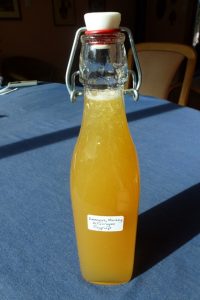