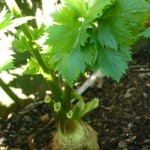 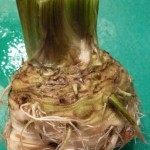 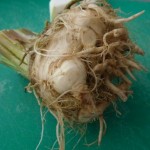 Celeriac is a type of celery, cultivated for its root. I had heard about it but had never grown or eaten it so I decided to try it out, particularly as it is grown in winter.  It is a peculiar vegetable.  The tops look like celery and the root forms a round bulb that is cream-green coloured. I was told to pick it when the bulb was about 10cm in diameter.  I was expecting it to be a round bulb but it had masses of roots underneath so that the actual edible bit is much flatter.

The skin is textured and ridged.  The flesh is creamy-white with a texture somewhere between potatoes and carrots.

To prepare it you peel the bulb, cut it into slices or chunks and cook until soft and tender either by microwaving, boiling, steaming or stir-frying.  For my first try I boiled and mashed it.  It wasn’t unpleasant but had such a delicate flavour that I was a bit disappointed.  Apparently it combines well with other root vegetables in a mash – one MasterChef recipe served a celeriac, pea and potato cake.

I also tried it in a soup with carrots and potatoes but the individual flavour was lost.  My friend Dominique tells me that in France they grate the peeled root and serve it raw as a salad with a little mayonnaise.  It can also be brushed with olive oil and baked in the oven.

Celeriac is a good source of fibre, supplying around three times as much as regular celery.  It is a good source of vitamin C, folate and small amounts of other vitamins and minerals including potassium, iron and calcium.  So I think I will have another try growing celeriac and try some other ways of using it.