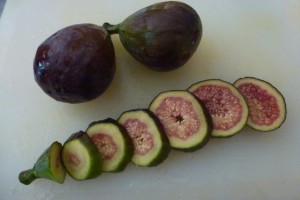 My fig trees produced their first fruit this year – I was so excited.  First of all I was just eating them fresh off the tree, savouring the novelty of fresh figs.  I have only had fresh figs once before years ago when I happened to be visiting a property with large fig trees at just the right time.  I came home with a bucket load of figs and made them into Fig & Ginger Jam – delicious!  I was really keen to make this again but it seemed that the figs were only ripening 2 or 3 at a time and they don’t keep long enough to collect enough fresh ones.

I looked up whether I could freeze them but the directions I found said you had to use masses of sugar.  I wasn’t very keen on this so decided to try the dehydrator.  I dried them for 48 hours – I didn’t know quite what to expect but they seemed pretty dry so I packed them into an airtight container.  Unfortunately they weren’t dry enough and developed quite a spectacular mould very quickly. 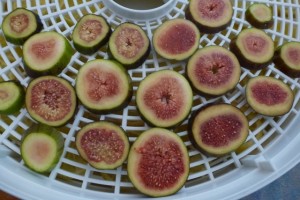 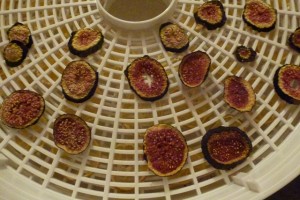 After this disappointment, I searched for more information on freezing and discovered that you could in fact freeze them whole! So next year I will just be popping them in the freezer until I have accumulated enough to make jam or anything else.  Freezing changes the texture and the figs will be much softer when thawed but that is fine if you are going to cook them anyway.

I had had my heart set on making Fig & Ginger Jam so imagine my delight when I found a recipe for spiced dried fig jam which used dried figs that you buy from the supermarket.  I wasn’t sure how many dried figs I would need to equal the fresh amount needed for the recipe but the dried fig jam recipe called for 250g so I decided to just try that.  I soaked the figs in 2¼ cups of water for 8 hours, drained them and used them in the recipe as usual. 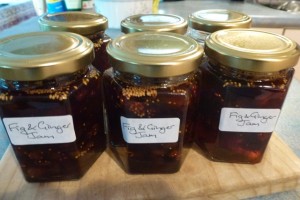 Wash figs, cut off ends and chop into small pieces.  Cover with half the sugar and leave to stand overnight or for 10-12 hours.  Next day, zest the lemon, squeeze the juice and finely chop the preserved ginger.

In a large pot, add figs, water, the rest of the sugar, lemon zest and juice.  Bring to the boil and boil gently for two hours or until jam is set.  Once set, put into sterilised hot jars and seal.

It is tasty but it turned out like lumps in a syrup rather than an integrated jam. I’ll definitely hold out for the fresh (or frozen) figs next time.