When I first had a veggie garden, I grew summer salad vegetables and it was ‘survival of the fittest’.  They had to cope with just the occasional watering and long periods of total neglect while we were away at the beach over summer.  The freezer was simply a place where one kept a large supply of meat, bread, pies, ice cream and other essential supplies for husbands and teenage boys. 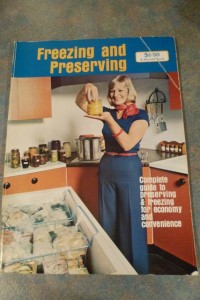 As the household shrunk and the gardening expanded, the freezer took on a whole new importance in my life.  I discovered that applying compost and regular watering made a massive difference to the productivity of the veggie garden.  I grew more things and in turn they produced much larger crops so I had to start managing a surplus.  Initially this was quite simple.  I have a wonderful guide to freezing and preserving that was put out by the local newspaper (‘centuries’ ago as you can tell by the style of the woman on the cover and the $1.50 price tag).

Basically you can freeze just about anything.  Whenever I have something that I don’t know what do with and wonder if I can freeze it, sure enough I can.  Not just the obvious meat, fruit  and veggies but also eggs, milk, cheese, cakes, biscuits, bread, leftovers….  So freeze I did! The summer garden bounty was frozen to give a good supply for cooking over the winter.

But then I decided to see whether I could grow some winter vegetables as well – the garden is quite shaded in winter so I had assumed that there just wouldn’t be enough sunlight for anything to grow well.  Well, it seems that they need a lot less sunlight than I had imagined and in fact they thrived.  And because I could, I did. I kept trying all sorts of different veggies until eventually the winter veggie garden was as packed as it was in summer.  And I kept freezing the surplus.

A whole new problem started to emerge: I wasn’t managing to use what I had frozen the previous season and I was beginning to run out of freezer space.  Reducing what was being grown in the first place might have been a sensible option but I was on a roll, so I had to think about how else I could preserve the garden bounty.  And so it all began …

Several of my friends have been talking recently about the need to get a bigger freezer and I was sympathizing with their plight.  But then I discovered that they all had small 2 shelf freezers as part of their refrigerator.  How on earth could they possibly be coping???  I have a 2/3 size fridge and freezer standing side by side – and the freezer is full to over-flowing.  I have so much jammed in there that every time I open the door several bags of frozen goodies come tumbling out.  Apparently freezers operate much more effectively if they are packed full rather than with lots of airspace! (I think I might be pushing that to the limit). 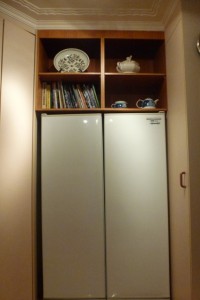 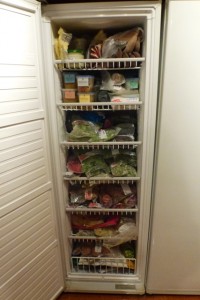