When I first started preserving I just used whatever empty jars I had saved or scrounged from friends – and this was absolutely fine.  I could usually get a few extra uses out of them before they cracked, the seals went or the lids rusted and I had to throw them out.  It generally made for a ragtag collection of preserves but who really cares when it is just for you or to give the occasional jar to someone else.

Then I thought that if I was going to be doing this more often I should probably invest in some proper jars.  I bought some large Agee jars and after the first use realised that there was no way I was ever going to use that much fruit (or whatever) in one go.  They were clearly much better suited for a family of six.  So they got sold on Trade Me. Even the half-size Agee jars are my least used – good for pasta sauce or tomato puree.  But for most of what I was making – jams, chutneys, pickles – the smaller Quattro Stagioni-type screw top jars were best.

But these preserving jars are expensive and when I started to make larger amounts of preserves I wanted to give them away to people but the cost of the jars meant that I really didn’t want to do that unless they were given to close friends and family and I could ask for them back when they were empty.  I was putting some jams and chutneys into the empty supermarket jars but that provided a challenge when wanted to package up ‘sets’ as gifts.  I really needed to find a better solution.

And then I discovered Arthur Holmes who are a NZ family-owned business who supply wholesale to all types of businesses including cottage industries.  They “repack bulk pallets into manageable cartons and specialise in supplying small quantities of quality jars and bottles and their respective closures.  Additional closures can be ordered individually, and there is no minimum purchase requirement.”  These guys are wonderful!

There are a huge range of different sizes, shapes and colours of jars; they tell you what size the lids are on each of them so you can just order more lids if you need to.  No minimum order is fantastic – they are happy to just send 2 jars if that is all you want and the order arrives on your doorstep a couple of days later.  More importantly for me, they are very cost effective with the jars I wanted costing $0.87 ($0.70 if you buy a full pack) rather than upwards of $5 each for even the smallest Quattro Stagioni jar.  And I can buy different sizes of the same style of jars and bottles so that gift packs can look more themed rather than a definite ‘home-made on the cheap’ look. 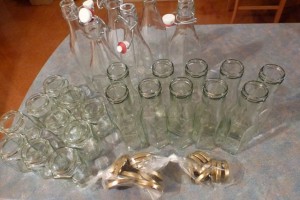