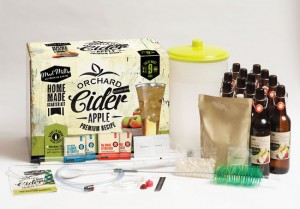 I’ve always liked the sound of making home brew but I’m not really a beer drinker and I’d heard so many stories of exploding ginger beer that I had previously decided that it wasn’t for me.  Recently I had some Airpoints to use up and spied a Mad Millie’s Cider Making Kit in the Airpoints store so decided to give it a go.

The Starter Kit http://www.madmillie.com/shop/Cider.html  comes with everything you need to make your first batch, including the fermenter, bottles, siphon, hydrometer, sterilizers, and the ingredient kit.

I must admit that when I got it home and looked at the instructions after a long day at work I thought ‘OMG, what have I done?’  The next night after watching the video on the Mad Millie website that shows you the whole process I felt a bit better about it, but still decided that it was a weekend activity for when my mind was fresh. 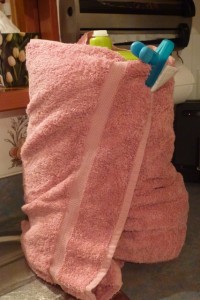 When I did come to start it actually was quite straightforward but sterilizing everything is critical so it is good to double check the instructions regularly to make sure you are doing things in the right order.  The kit is really well thought out and even has several little sachets of detergent and sterilizer for using at the different stages of the process.  Having washed and sterilized everything, I put the juice concentrate and yeast in the fermenter with hot water as instructed and then saw that it needed to be kept between 18 and 28oC for week.  Typical!  I had decided to do this when it wasn’t ever going to even reach 18oC unless I had a heater going (and I wasn’t going to leave the heater going day and night just to brew a batch of cider).  Not to be daunted I came up with the ingenious solution of wrapping it in a large towel to keep it warm.  This worked well for a few days but then the temperature was getting pretty close to the lowest end of the range.  So I then heated up my wheat bag in the microwave and slipped that into the towel wrapping, repeating several times a day.  This worked a treat but it did seem like an awful lot of pampering was required.  Still, yeast is a living thing and hopefully the pampering would be reciprocated when I got to sample the final product.

After week, you test the brew with the hydrometer to make sure all of the yeast has been used up and re-test a day later to make sure it is stable.  Again they have made this very easy: you drop the (sterilised) hydrometer into the fermenter and if it floats at the level of the green line it is ready to go. 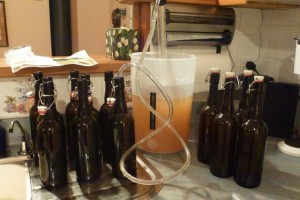 Then you sterilise all the remaining bits including the bottles and siphon and have the fun job of transferring it to the bottles – not forgetting to put in the carbonation drops that are designed to put a nice bit of bubble in the finished bottle.  A week with the bottles at room temperature and then to a cool dark place for another 2 weeks before you get to taste success (fingers crossed).

Before I’d even tasted the first batch I was planning what flavour my next batch would be.  Mad Millie has ‘next batch’ kits of apple, spiced apple, pear, and strawberry and pear.  Some research was definitely required.  I went down to the liquor store and purchased single bottles of every different flavour of cider they had: wildberries, strawberry and lime, feijoa and passionfruit, apple and pomegranate, kiwifruit and mandarin, strawberry and elderflower, blackcurrant and manuka honey.  These were mostly very sweet and certainly not a refreshing thirst quencher but I liked the fruity flavours.  One thing I really liked about the kit was that it came with a sweetener sachet that you could add all for a sweet cider, half for a semi-sweet or not at all for a dry cider.  I opted for a dry cider.

As is often the case, I then started talking to people and discovering others who were also making cider.  One had even gone as far as to purchase an enormous quantity of apples because she wanted to say she had made it right from the start.  After blocking the waste disposal unit and several drains she did begin to wonder whether it was such a good idea.  But of course this just got me eyeing up the neighbour’s apple tree for next year.  The apples are all just lying on the ground because they have codling moth through them.  I could cut those parts out and juice the rest, and then I could add berries or other fruit from my garden ….