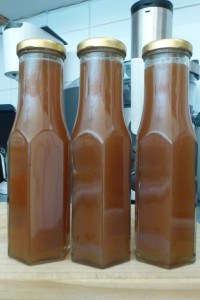 I was given a ginger syrup from a local market a couple of years ago and it was absolutely delicious.  You can add ginger syrup to so many things: use it in marinades, stir fries and vegetables, or pour it over fruit, ice cream or pancakes.  Just add hot water, mint and lemon for a delicious tea or make a ginger latte with hot milk.  Adding soda makes an easy refreshing ginger ale.  I am a real ginger fan and I had to stop using it for a while because I was having it in EVERYTHING (and although you don’t need much, it does contain sugar).

I was intrigued as to how you would go about making ginger syrup and found a recipe on-line that I thought I could adapt and give it a go.  The key apparently is to get fresh young ginger where the skin is a yellowish pink colour.  Often you will find that the ginger has a brown papery skin and the inside is very fibrous and difficult to extract the juice from.  Mine was in the middle I think.

The recipe also used lemongrass which sounded interesting and I have some in the garden. The syrup from the local market listed sultanas in the ingredients – I’m not sure if that was for sweetness or colour or both, but decided to add some to mine anyway.

Wash the ginger and lemongrass. Roughly chop in a food processor before adding the sultanas (and hot water) and 1 cup of water.  I initially added them all together as instructed in the recipe but found that the ginger pieces just bounced around and splashed the water out of the top of the food processor.  Separating them and processing without liquid first kept it under control.  Process until the mixture is pureed, scraping down the sides with a spatula as required. 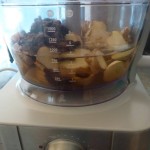 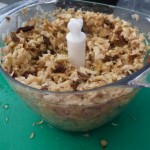 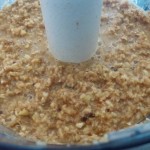 Line a large measuring jug with cheese cloth or muslin (I just used a folded clean kitchen multi-cloth) and scoop some of the puree mixture into the cloth; you’ll need to do this in batches.   Squeeze and twist the cloth to wring out as much liquid as you can.  Discard the pulp and repeat until you have squeezed out all the ginger juice.  I had 3 cups of liquid.

Add the ginger juice to a large pot along with 3 cups of sugar.  Heat the mixture over a medium heat to a full simmer.  Keep an eye on it and reduce the heat if it looks like it is going to boil over.  The impurities that made the juice cloudy will float to the top as foam, use a fine mesh skimmer or spoon to remove the foam.  After about 10 minutes the foam stops forming and the syrup is clear.  Pour the hot syrup into sterilised glass bottles.  Made approx 1 litre. 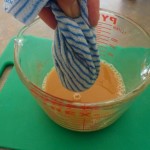 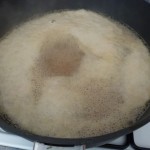 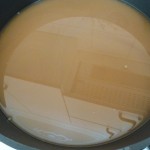