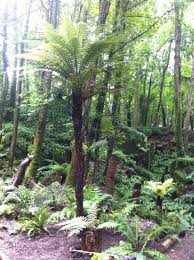 For 20 years I have had a lovely ponga fence forming a screen between the entertaining and working spaces of my garden. It was a gentle curving organic screen that blended into the garden. It was great to grow my blackberries up against and was a great structure to drape bird netting over to stop the birds getting at the blueberries or whatever else was fruiting at the time.  But during the last big storm several of the ponga logs snapped off at the base – it was time to replace it.

For anyone outside of New Zealand who is reading this: pongas are the local name for the native tree fern (our famous silver fern) and the fibrous trunks can be used for wonderful landscaping designs.

Plan A. I talked to my trusty gardening man and asked if he could replace the fence for me – I just wanted it exactly the same as it had been. Well it seemed it wasn’t going to be as easy as that!  Apparently it is much harder to get pongas now than in used to be and if you do see them at landscapers supplies they tend to be big thick ones or very scrawny ones.

So we had to start thinking about how else we could achieve a similar result.  I wanted an organic screen rather than just a fence.  To add to the complications, I still wanted it to be gently curved and the property is on quite a slope so the levels would be difficult. 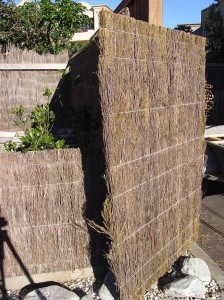 Plan B. It didn’t need to be a particularly structural fence so perhaps we could just use Brushsticks as they would give a similar organic finish. But Brushsticks panels need to be stapled to a beam at the top and with the slope in the section a straight beam would be 6ft at one end and 3ft at the other, so we’d  need several steps in height and I thought that would look a bit strange.

Plan C. The only way to be able to get the height roughly level at the top would be to use ordinary fence palings.  But then it would just look like an ordinary fence.  I schemed for ages and finally thought perhaps we could use fence palings on alternating sides and put a cap across the top to hold them together and then staple Brushsticks over the top on both sides.  It would be a bit of overkill but could give the finish I was after.

Plan D, E, F…. I kept a lookout at all the different fence construction methods and suggested several in turn to the gardening guy.  What about half-round posts? what about full round posts? None of these were really going to work.  And my gardening guy was going off on holiday for 5 weeks.  He did remove the old ponga fence for me – and the garden looked quite naked without it. 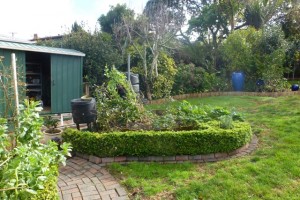 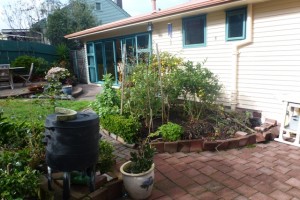 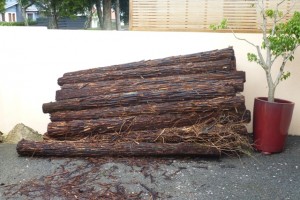 The next weekend I was down at my local garden centre and saw a big pile of ponga logs!! They were only 1.8m tall but that would do for half of the fence.  I’d counted up the old ones and I’d need about 44 logs.  I talked to the manager and he got the fork lift and helped me select ones that would be suitable – we got 25 out of the 50 that were there – and delivered them to my house.  Buoyed up by my find, I went off to the landscape supplies yard and waded across the mud to a scraggly pile of 2.4m ponga logs many of which were indeed too thick or too scrawny.  There were about 15 logs that would do the job – so I got those delivered.  I was only a few short of the total I needed now and enthusiastic to get the fence built.

I searched online to find a local landscaper who had at least one photo of a ponga fence on their website and phoned to see if they could build it for me.  No problem – except they didn’t phone back.  I tried again and managed to get someone to come around and look at the job (and I gave them a photo of what I wanted it to look like) – they didn’t think I’d need any more logs but they could go and get a couple if needed.  No problem – except they didn’t come when they said they would. I phoned again and they did arrive later that week.

I raced home from work that evening eager to see my finished fence – and was absolutely horrified.  It wasn’t finished and was sloping off on a weird angle – if they followed that line the fence would be about 2ft tall when it reached the house.  Thankfully they hadn’t cut the longest logs back.  When I phoned, I was told that ‘as a designer, he had spent ages working out how I would want it to look’.  I’d given him a photo of exactly how I’d wanted it to look! And surely it would make more sense to ask me rather than deciding for me!!!  And what’s more he’d concreted everything in, they hadn’t got the extra couple of logs that were needed, they had used up all the time that he’d quoted and the height discrepancy was all my fault because ‘the customer had provided the materials’!! I was absolutely fuming.

The photos I supplied 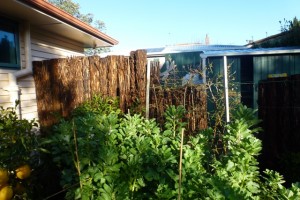 What I came home to 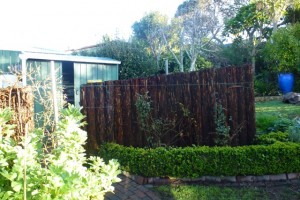 .. and the string line

He did agree to come around on the Saturday to discuss the job. I went out before he arrived and worked out that I could get a straight line across the pongas.  It would be 30cm shorter than I’d wanted but I figured I could live with it.  I got out some string and a level and marked out how I wanted it to be finished.  The look on his face when he arrived (and said ‘what’s with all the string’ and I said ‘that’s the level I want’) was priceless.  ‘Oh but that’s not level’ he said.  ‘Yes it is’ I showed him with the level. With a bit of negotiating over price, he agreed to come back and complete the job on Monday.

No sign of him Monday. Or Tuesday.  Finally Wednesday he showed up mumbling about sciatica. ‘You just needed to send me a txt to say you weren’t able to come’ – he’d lost my mobile number! But the fence was finally completed – and at least they did tidy up well after themselves. 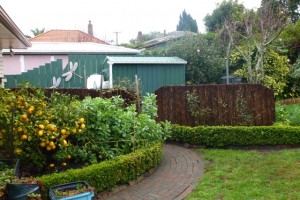