I find that Berryfruit are much easier to prune than grapes.

For Raspberries (autumn fruiting) you simply cut the canes back hard (I prune them to about 1 metre high) once they have stopped producing fruit in autumn.  Remove any dead or diseased wood.  They lose all their leaves over winter and start sprouting again in spring, producing fruit on the current season’s growth.  Many varieties need winter chilling but there are some newer varieties that are more suited for the more subtropical climates like Auckland.

Blackberries fruit on last season’s canes.  So you will have some canes that have produced fruit in the current season and some new canes that have grown up but not produced any fruit.  Cut back the canes that have fruited and leave some good strong new canes for next season – you may want to remove any new canes that are very spindly.  They will lose their leaves over winter and sprout again in spring.  I get masses of fruit from just a few canes.

Blueberries need very little pruning at all.  You just need to trim lightly to keep them to whatever shape and size you desire.  They fruit on the previous season’s wood so be careful not to remove too much when pruning.  Prune out any dead or diseased wood and branches that are crossing over one another to allow more air and light into the bush.  Mine lose some of their leaves over winter.

You don’t really prune Strawberries but you do need to cut back any runners and generally tidy up the plants.  Cut off all the old leaves and destroy them along with any old straw mulch to remove pests and diseases.  Cut off the runners as they form unless you want to produce a few new plants, and don’t let any plant produce more than 2 or 3 runners.  You will need to replace the plants every few years (usually after 3 years of fruiting).  This year I replanted most of mine (along with a few new plants) either in fresh strawberry planting mix in my planter boxes or in a new area in the garden.

I also planted some Blackcurrants a couple of years ago and the instructions were to not prune them for two seasons.  After that prune to maintain size by removing old stems to a new low bud, removing at least 1/3 of the old cane. Aim to have 8-10 shoots per bush. No cane should be in place longer than 3 years. They fruit on new wood, so encourage as much young wood as possible by cutting down old wood to new buds in winter.  I am assured that there are sufficient chilling hours in Auckland for blackcurrants. 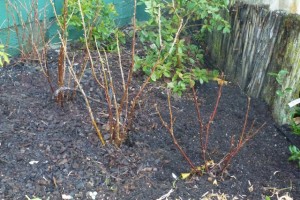