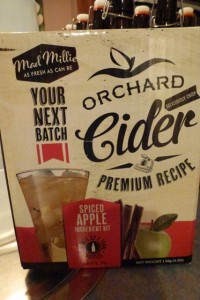 I started my next batch of cider in great anticipation even before I had tried the first.  The first batch was plain apple cider.  Mad Millie has several different types of cider to try, so I chose Spiced Apple Cider.  I love anything with cinnamon in it, apple and cinnamon is divine, and the description said that it could be served warm.  It was now winter and warm spiced apple cider had my mouth watering.

I also needed to get some more bottles.  Several places have 750ml brown glass flip-top bottles but Mad Millie have them at a very reasonable $26 for a case of 12. 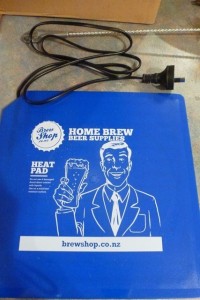 While I was searching online to see where the best place to get the bottles from, I also discovered that the Brew Shop had a heat pad on special.  This is a fantastic gadget that is so much better than my original improvisation of wrapping a towel around the fermenter and adding a wheat pack several times a day to keep the temperature high enough for fermentation.  You just plug it in and put the fermenter on top.  It kept my brew at 23C right throughout the week and doesn’t use much power. 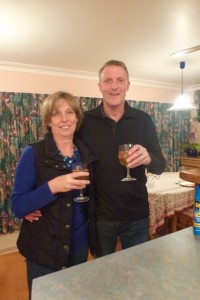 Just when the batch of cider was maturing I had friends Mike and Phillipa coming over for dinner and I promised them warm spiced apple cider.  When they arrived I realised that I had no idea how one was supposed to warm it.  I emptied the bottle into a saucepan and heated it gently – this worked well for heating purposes but there were lots of bubbles released and I thought it seemed a little flat.  It was still enjoyable but since then I have just poured it into a glass and heated it for a minute in the microwave – perfect!