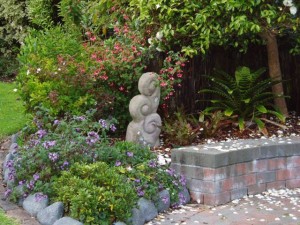 I love to have art in the garden but it can be costly.  It is also great to have things that are meaningful to you rather than just art for the sake of it.  A while ago now my sister-in-law Bronnie and I attended a weekend sculpture workshop with artist James Wright (www.jameswright.co.nz) out at Clevedon. 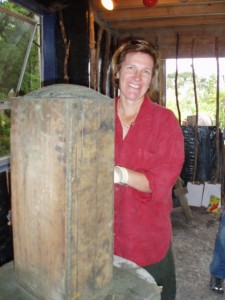 I was really looking forward to it but was in quite a panic about what I would make -how would I decide? I visited lots of different garden centres and other places that had sculptures of different sorts, taking photos of all the different sculptures that took my eye.  After a while it became obvious that curled fern fronds were the subject of choice.  I carefully sketched up what I wanted to create.  The end result was nothing like it!

We were working with Soft Stone – a mix of equal quantities of sand, cement and vermiculite.  It was poured into a box – at the beginning of the workshop it was still quite wet and we were carving just into the front part. 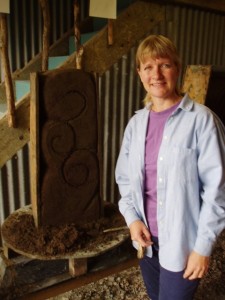 This was fairly straightforward and it was relatively easy to transfer the concept that I had on paper to the stone.

But then as the mixture hardened we took off the box  and suddenly we were left with the daunting task of converting this to a 3 dimensional object.  It certainly wasn’t as simple as drawing the same design on the other side and joining the two sides together.  It took me quite a while to do the mental gymnastics that would allow my brain to comprehend that I had to go with the flow and follow the shapes that I already had around.  And it still had to look acceptable from the front, side or back.

Gradually I got the hang of it and eventually a passable sculpture began to appear.  James showed us how to ‘stick some soft stone back on’ so that we could round out shapes beyond what had been the confines of the rectangular box.

We came back the next day once the sculptures had hardened overnight and began the process of sanding and smoothing the final shape and adding whatever adornments took our fancy.  My sculpture has had pride of place in my back garden ever since and when I look at it I always get a sense of pride in being able to say ‘I made that’!