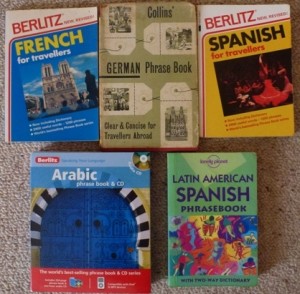 Native English speakers are extremely lucky when they travel because it is unusual these days for there not to be someone who speaks a bit of English just about everywhere you go. But this can also make us complacent and even lazy when it comes to trying to communicate with others when we travel.  If you have ever had to try to make yourself understood in another language then you will be much more accommodating and understanding of those for whom English is a second language.  It is all about the willingness to communicate whether or not you share a language.  If you can learn even just a few words in the language of the place you are in, you will be rewarded many times over with the interactions you have.

One of my most memorable communication experiences was in Bulgaria in the mid-1980s. We were eating in the hotel restaurant because there was a curfew after dark.  There was a bus-load of Russians also staying at the hotel and back then there was still quite a degree of anti-Russian sentiment evident.  Even from my fellow travellers there were murmurs of “you can’t talk to them, they’re Russians“.  Four of us were seated at dinner next to a table of 4 Russians and we started “talking” with them.  We didn’t speak a word of Russian and they didn’t speak a word of English but by the end of the evening we knew an awful lot about each other.  With the use of maps and photographs, lots of pointing and miming, and trying out of saying names we knew that they all worked for a particular organisation and had been given a trip away with their partners as a reward for their hard work, we knew the town they were from, their names, how many children/grandchildren they had etc.  It was such an enjoyable evening and included sharing vodka and dancing. 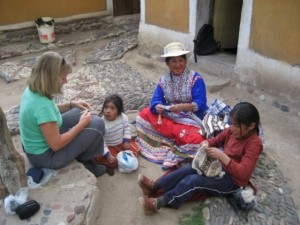 Even just a few words can make all the difference and there are so many life experiences that are easily understood across cultural and language barriers.  In Peru I had a homestay with a local family in a tiny village up in the High Andes.  As I sat in the courtyard of their home, learning how to spin and knit llama wool from my hostess, we started to talk.  She spoke primarily Chechuan with some words of Spanish and I spoke some halting Spanish.  She was very concerned that I was travelling by myself and wanted to know where my husband was.  I said that I used to have a husband but didn’t anymore. Is he dead? Oh my goodness, how to explain my situation in a culture where divorce didn’t exist, and where I didn’t know the words to describe it anyway.  In the end I simply said ‘another woman’.  She smiled in comprehension and said ‘Men!’

The effort to communicate can really be appreciated by those who are involved in tourism but don’t have the ability (or sometimes just confidence) to speak with the group in English.  In Ecuador, our mini-bus driver seemed very distant and rarely ate his meals with us.  One time I convinced him to join us and asked him in Spanish about his family, where they were from, and what he liked doing.  What a transformation! His face lit up and he was so delighted to be able to be part of the group.  The guide and I made an effort to translate some of the conversation and he tried to learn a little English too.  After that he, and we, had a much more enjoyable trip. 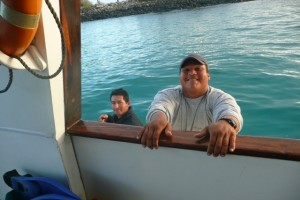 In the Galapagos Islands, I started talking to our boat crew and discovered that several of them spoke some English and that one of them had even worked in New Zealand for 9 months on fishing boats.  We had many conversations in both English and Spanish.  One that sticks in my memory is when we were heading out for another snorkelling trip and I was bantering with the boatman: I didn’t know the word he was saying in Spanish and he didn’t know the word in English so he turned the rubber dinghy around, circled around the main boat and called out to his mate in the kitchen who told him the word we were looking for.  We carried on our conversation and he went back to where we were supposed to be going.  My fellow passengers looked very confused and wondered what that had all been about.  Later on, some were to say ‘you’re getting special treatment from the crew!’ – well perhaps, but it was because I had built up a rapport with them. 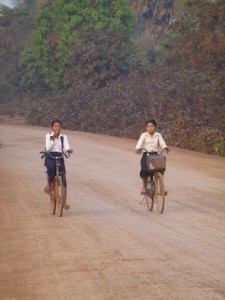 In rural Cambodia I had a delightful experience when going out for an early morning walk.  School started early there and the children were walking or riding their bikes to school as I was walking back into the village.  They don’t get many visitors to the village and certainly not Westerners.  I said Sousdei (hello) to each group as they came past and once the ice was broken, their faces lit up and all of them wanted to try their English with me.  I think I spoke to just about every child in the village before breakfast that day.

I have learnt quite a bit of Spanish over the years and while I am by no means fluent, I am happy to try speaking it with whoever I meet. Often my hosts want to practise their English so I often have unusual conversations – in bad Spanish on my part and often bad English on their part.  But in every country I visit I at least learn to say hello and thank you in their language – it reaps rewards so much greater than any effort it takes to learn and use them.