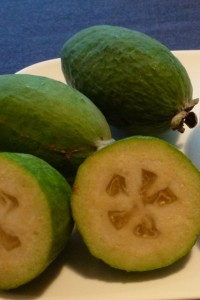 If you are not familiar with feijoa it is really hard to describe the taste and texture.  The closest relative is a guava and they are sometimes known as pineapple guava.  The oval fruit is green on the outside with slightly gritty creamy flesh and a clear jelly-like seed pulp in the centre.  I’ve heard the aromatic, strong, complex taste described as a combination of: pineapple, guava, strawberry, apple, and mint, with a faint wintergreen-like aftertaste.  They are a very distinctive flavour and it seems that you either love them or hate them.  I love them.

The feijoa is native to South America but in New Zealand it is an extremely popular garden tree.  It can be grown as a hedge to screen out neighbours, as a small specimen tree or even in a pot.  Feijoas are evergreen, have lovely flowers in summer and provide fruit in autumn and early winter.  The fruit drop to the ground when they are ripe and many lawns are absolutely covered in fruit at this time of year.  Those who have trees and don’t like the fruit desperately try to give away the fruit, and those who don’t have trees but love the fruit have been known to raid other people’s gardens at night.

Most people seem to be able to grow feijoas with no special effort at all.  I have 3 trees at the back of the property that have been there for the best part of 20 years and originally had some fruit but hadn’t produced any for quite some time.  The are supposed to respond well to heavy pruning but I tried that a couple of years ago with no luck.  Last winter, I pruned them hard again as well as some neighbouring trees in case they had been getting too shaded.  I gave them lots of fertiliser in spring and watered them well over the summer and have been well rewarded with lots of large fruit this season. 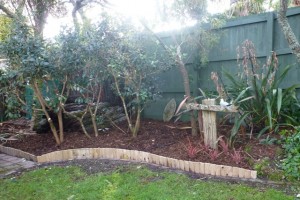 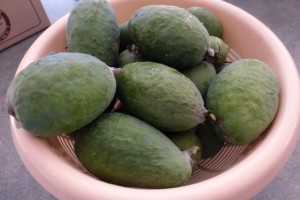 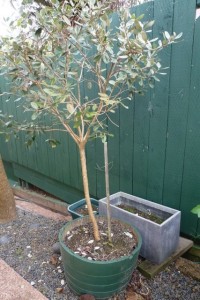 Standard Feijoa in a tub

In my earlier desperation I planted a feijoa in a tub near the vegetable garden and got quite a few fruit but it was hard to keep it watered enough.  I’ve now planted it in the ground in the same spot.

I also planted some new Bambino feijoas that are dwarf plants with small fruit, supposedly with edible skins so you can just eat the lot but they are still a bit tough for my liking. 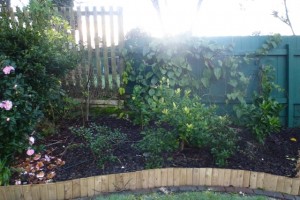 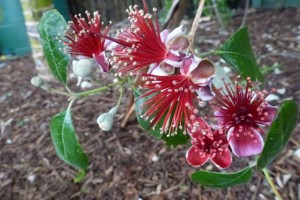 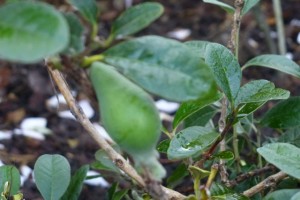 I think that feijoas are a great fresh fruit just scooped out and eaten from the spoon, or served with yoghurt on your breakfast muesli.  But they are so versatile and can be used in muffins and cakes, or as a crumble for dessert.  Feijoa chutney is delicious, and I have to try making feijoa vodka now I have a good supply of fruit.

You can freeze feijoas as well.  I use a light sugar syrup (1 cup sugar to 3 cups water) to stop the fruit browning.  Peel and chop the feijoas and use about 1 cup syrup to 1 litre of fruit for freezing. 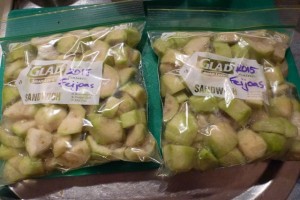 The petals of feijoas are sweet to attract the birds to them for pollination, so you can use them as edible flowers.  I froze them in ice cubes for summer drinks. 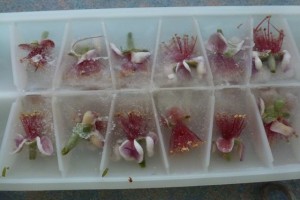