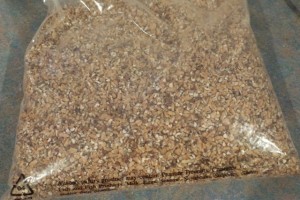 This recipe is kindly shared by Simon and Kathryn Deroles who developed it over several years and report that it even passed the ‘fussy children’ test.  I also have to thank them for sending some kibbled grain up to me from Palmerston North as I have been struggling to locate kibbled wheat or kibbled grain in Auckland. Ceres Organics have it as a product and list several different stores as stockists but they (so far in my searches) seem to have other Ceres products but not kibbled wheat.  Simon and Kathryn get it from the bulk bins at their local New World supermarket.

Take 3/4 cup kibbled grain, cover with water and bring to the boil.  Let stand off the heat for 2 minutes then drain but do not rinse. 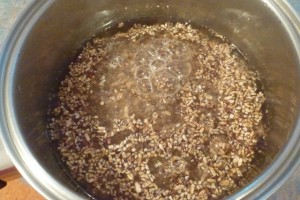 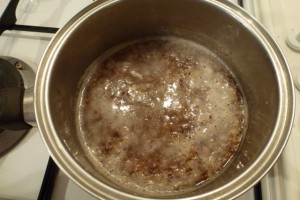 Bring to boil, remove from heat and allow to stand for 2 minutes 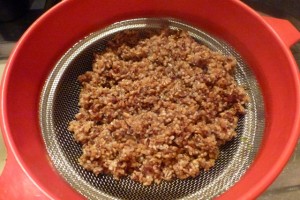 This is a very wet mixture….so if you look into the pan when its mixing it won’t look like a neat ball of dough at all.  Simon says: “It should be the consistency of “elastic thick mud”…that’s the best description I can think of”.

This recipe works well in a Sanyo Bread Factory Plus. You may have to tinker with it when using another breadmaker. The crust is not as dark as the shop bread but the inside is the same.

My first loaf rose beautifully but then ended up sunken at the end.  I thought that perhaps the kibbled grain had been too hot and caused the yeast to rise prematurely and/or that the mix was a bit too wet.  So I tried again and left the grain to cool some more and squeezed out as much water as I could before adding it to the mix.  This gave a much firmer dough but it still had a sunken top. 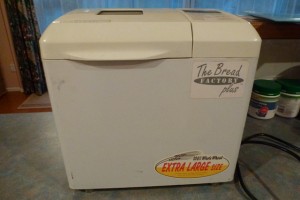 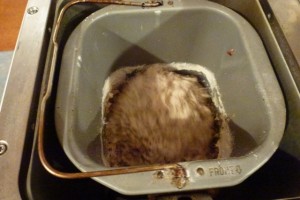 Very wet mixture does not form a ball of dough 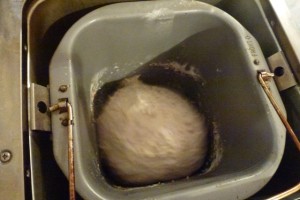 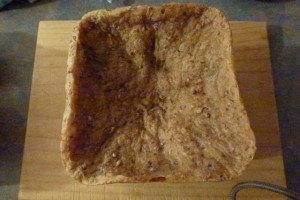 A bit sunken at the top

Both attempts were perfect inside though and lived up to expectation. 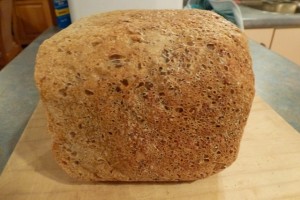 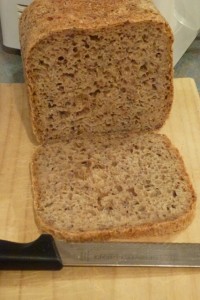