Growing bananas at home was never something I had contemplated.  I always associated bananas with being imported from tropical countries that are much warmer than New Zealand.  Even though I had seen banana trees growing in people’s gardens around Auckland, I had never seen any producing fruit and assumed they were all ornamentals.  Then I was round at my friend Michele’s place and was astounded to see huge bunches of lady finger bananas on trees growing in their garden. When their trees produced suckers they gave me some to plant in my garden. I also found a dwarf cavendish (the common) banana on special at the garden centre and bought that as well.

I planted my new bananas in a back corner of the garden that I gave a make over last spring, clearing it out and using a bark mulch to help stop weeds, and installing a watering system gravity fed from my new water tanks.  The plants really thrived last summer and grew a huge amount with their wonderfully lush leaves giving a very tropical feel to that part of the garden. 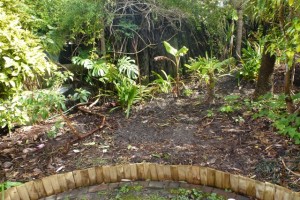 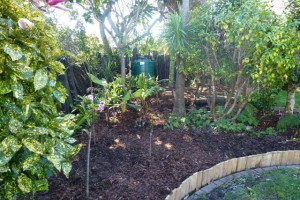 With mulch and watering system added 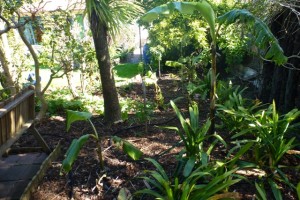 Planting of new suckers including a large one 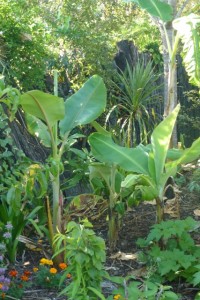 Growing well over the summer 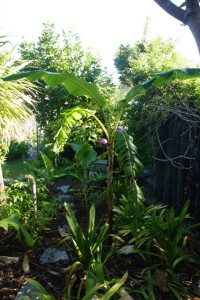 Even the large transplanted sucker is thriving

Soil moisture is apparently one of the most important factors: lack of water at any time may cause a reduction in fruit numbers and size. Even though soil moisture is important, soil drainage is just as important, sloping land will help with this. Bananas should ideally be planted in slightly acid soil.  So theoretically I have got a good spot for them, and am hoping they get enough sun to convince them to fruit (I’ve just found out that fruiting is governed by sunlight and warmth on the trunk).

Michele brought me more suckers later in the season, including a very large one that was taller than me and earned me some stares as I drove home with it beside me in the car. I was a bit concerned about how well it would transplant but it has also established well, adding nicely to my grove of bananas.

Bananas do tolerate frosts if not too severe.  I discovered this first hand over the winter: the frosted parts blacken and die back but they do grow again.  Apparently virtually all growth stops when temperatures get below 15C so not a lot has happened over the past few months.  Combining this with the winter winds shredding all the leaves, the plants are looking a bit sad at the moment.

I had been hopeful that I might get some fruit this year as they can start to produce after 18 months but, given that they fruit in September through to November, I’m not liking my chances for this season.  If I get another good growing season this summer, they must surely do something for me next year.

Still, I am starting to prepare myself for having masses of bananas and collecting all the recipes I want to try.  See my favourite versatile banana cake recipe and look out soon for the recipe I’ve just found for delicious, healthy, banana icecream – yes it is definitely healthy!