I wrote in an earlier post about Water Tanks for the Garden that I had installed 2 water tanks and was waiting for summer to see whether my planned system would work. There wouldn’t be enough pressure from the tanks to power a regular watering system unless I used a pump and I wanted to avoid doing that but my property is on a slope so there should be some pressure from gravity (and the Tank Guy thought this should be enough).

I asked a couple of different “garden irrigation specialists” to come round and give me a quote for setting up a system for me. Both were extremely rude about my plans and seemed to think that it was only worthwhile using their conventional systems. One, when I pushed a bit harder, said that it would cost me well over $1000 to set up a complicated system of pumps, pipes and valves – this was before he even got to the actual irrigation piping.

Somewhat taken aback by their refusal to consider anything a bit different, I resolved to work out how to do it myself. After a bit of research I discovered ‘weeper’ hose that allows water to just ooze gently out of the pipe, and requires very low water pressure so I thought it might work for me.

My first attempt wasn’t very successful but then I read the information more closely and saw that weeper hose wasn’t recommended for slopes.  Hmmm. I rearranged the hose so that it went in wide sweeps across the slope rather than down it and got great success (if you can call water dribbling out of a pipe success!). So then I went about installing the pipe properly, burying it under the layer of mulch as I went. 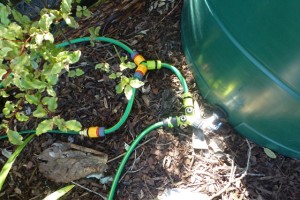 Use of pipe connectors to set it all up

Used this way it is supposed to be much more efficient use of water, requiring 70% less than normal watering systems as the water is delivered directly to the root zone of the plants and isn’t exposed to as much evaporation from the wind and sun. I needed more than one length of pipe to be able to snake it around all my plants and after some experimentation found that it was best if I used ordinary hose to come down the slope to where I wanted the watering to begin and then lay out the weeper hose in wide sweeps across the slope as before. This required a bit of ingenuity and various pipe connectors to set up – but it works.

Last summer, I used this system effectively to water about 50m2 of garden and my plants thrived. The 1000 litres lasted about 4 hours dispensed through about 60m of weeper hose. About 1-2 hours per week of watering seemed to be about right.  The tank of water doesn’t last more than a month at that rate but in Auckland at least it usually doesn’t go very long without rain and the tank fills again from the roof very quickly.  Even if I had to resort to filling the tanks from the mains water system from time to time, I still have a very simple, efficient and effective method of watering my garden. 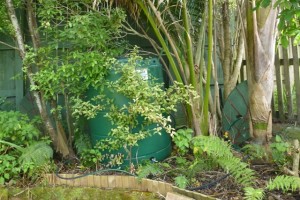 Can you spot the water tank?

I have now bought a further 3 tanks that much to my surprise fit neatly into different corners of the garden and, with their green colour, nobody even sees that they are there until I point them out. They have all been filled over the winter (pumped from the tank that collects the water from the roof) and I am almost there with setting up the weeper hose system for all of them. My intent is to be able to water everything using this method except my vegetable gardens that I am happy to water by hand. 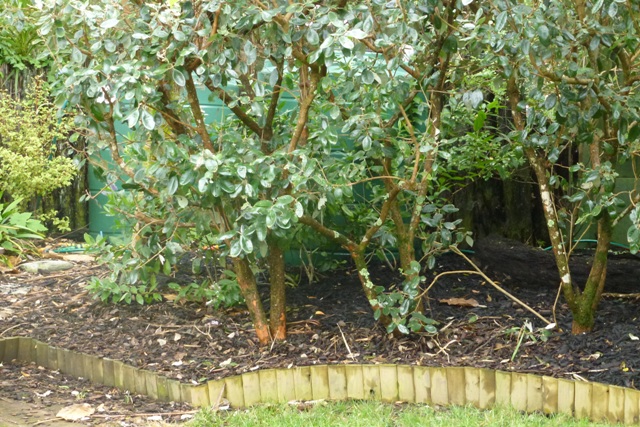 Two water tanks in the back corner