I had never even heard of edamame beans until a couple of years ago when they started appearing in the ‘trendy food’ scene. Now I know that they are the green immature pods and seeds of soybeans.

The USDA states that edamame beans are, “a soybean that can be eaten fresh and are best known as a snack with a nutritional punch”.  Edamame and other preparations of soybeans are rich in protein, dietary fiber, and micronutrients, particularly folate,manganese, phosphorus and vitamin K. The balance of fatty acids in 100 grams of edamame is 361 mg of omega-3 fatty acids to 1794 mg of omega-6 fatty acids.

I had a spot in the garden and decided to try growing them. Actually it was my second attempt because the first time I put them in the ground in autumn alongside my broad beans and discovered the hard way that they like warm temperatures – they just sat there without growing whilst the broad beans turned into triffids.

They grow to a small bush about 1 metre tall and flower and produce beans over quite a long period of time. Like other beans, picking them encourages more to form. They start as just slender pods looking a bit like sugar snap peas, and then the beans start to form (usually about 2-3 per pod). You pick the bean pods while they are still fresh and green with beans inside. If you leave them to ripen, the pods will turn yellow and start to dry out. 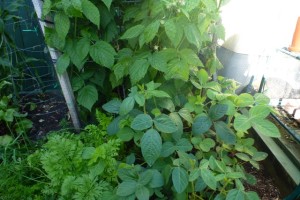 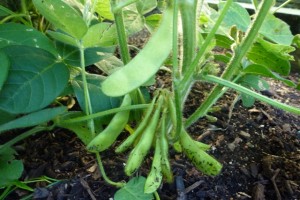 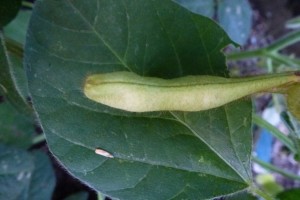 The simplest way to prepare them is to cook them in the pods: boiled in water, steamed or microwaved and then eat seasoned to taste with salt and/or garlic.  In Japan, edamame served this way is a popular side dish at restaurants.

If you have lots of edamame beans you can blanch them and then freeze them (see Freezing Vegetables).

I also tried a recipe I found for Roasted Edamame with Sea Salt and Cracked Pepper – and they are very more-ish: crunchy on the outside and chewy in the middle. 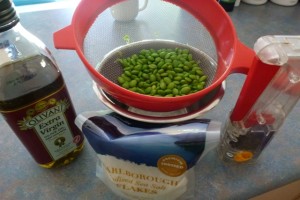 Mix beans, oil and seasonings in a bowl. Spread in a single layer on a baking tray and roast for 30-40 minutes at 180C. Stir every 10 minutes and watch for the edamame to begin puffing and turning golden brown. Their colour will darken and you’ll hear them ‘singing’ as steam escapes from inside the bean. Remove baking tray from the oven and transfer the roasted edamame to a serving bowl. They are best eaten within a few hours of roasting. 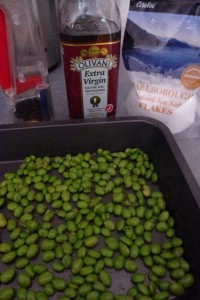 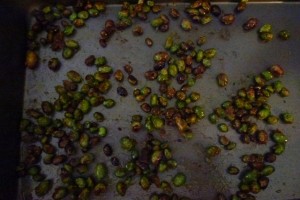 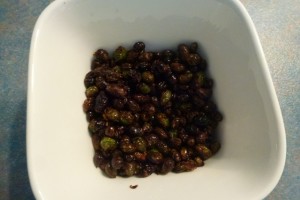