Each year it seems that a different fruit or vegetable does exceptionally well in my garden, producing so much that I have made everything I can and am giving away masses to friends and family. A couple of years ago at work I became known as the ‘cucumber fairy’ – depositing cucumbers on desks far and wide. This year I don’t have quite so many cucumbers (yet?) although I’ve made many jars of bread and butter pickle. I had temporarily run out of preserving jars so thought that I’d try these cucumber juice recipes for a light and refreshing summer drink instead. 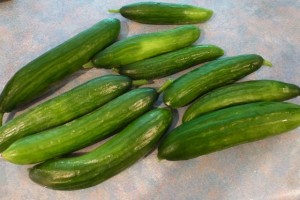 Set a fine-mesh sieve or colander lined with dampened cheesecloth over a bowl. Puree the cucumbers in a blender or food processor, working in batches as necessary and transferring the puree to the sieve or colander as you go.  Let drain fully, 10-15 minutes, pressing on the pulp to release all of the juice. Compost the solids.

Pour the cucumber juice into a jug.  Add the water, sugar and lime juice, and stir to dissolve the sugar. Serve over ice, adding a splash of soda if you like.

I used 8 smaller lebanese cucumbers and put them straight into the juicer which was very easy.  This gave me 2 cups of cucumber juice. I added 1 cup lime juice and 1 cup water to give 1 litre. The juice was quite a dark green initially but eventually more solids settled out leaving a pale green liquid (see below) that might suit you better. 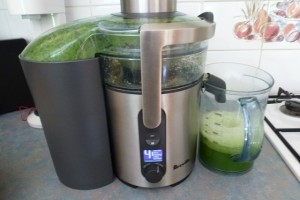 Use a juicer if you have one 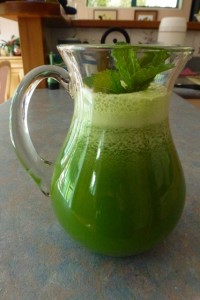 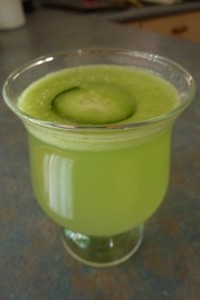 Combine the Cucumber Agua Fresca and vodka with the ice in a cocktail shaker and shake to chill. Strain into a martini glass.  Garnish with the cucumber slice. Makes 1 serving.

If that sounds all a bit ‘James Bond’ for you, then mix 2 parts Cucumber Agua Fresca to 1 part vodka in a glass and stir. Top up with soda if you want a longer drink.