As I flew into Beijing, as far as the eye could see was a vast flat land entirely covered by human endeavour. It was an orderly patchwork of regular rectangular fields of green and brown surrounding villages dotted over the landscape. Long straight roads connected them and stretched into the distance. Most of the village roofs were terracotta brown but favoured shades of red and blue provided bright flashes in the rather brown and dusty countryside. The dry winter has just finished and verdant green patches showed only where the rivers and canals flowed through. As we got closer to the capital city, the villages got larger and then grew upwards as the soon to be familiar apartment blocks started to appear, gradually increasing with height. Closer still and industrial areas were balanced by the appearance of wealthy clusters of large individual houses set amongst leafy green trees and still more high-rise buildings. Today is clear and bright and, although hazy in the distance, there is no sign of the recent sandstorms that have been blowing in from Mongolia in the north. 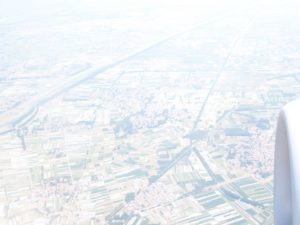 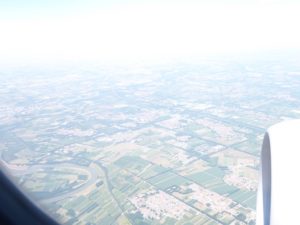 Human endeavour as far as the eye can see 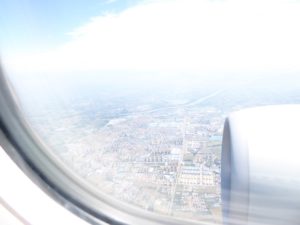 The impression of vastness continued as we arrived at the airport and taxied for miles until we reached our allotted space and were transferred to waiting buses to be ferried to a distant terminal to complete our immigration processing. Then we went down to catch the train that took us further still to where our bags were waiting for us on carousel 39. Passing through customs was a random search affair and we passed through without incident to seek out a taxi on the other side. Although the queuing area indicated that this could often be a lengthy process, we were quickly shown through to the waiting rows of taxis to be whisked off towards the city. The roads into the city seemed very organised and clean, with trees and greenery surrounding them. The lack of congestion may have been because it was a Sunday afternoon. In the city we saw old apartment blocks abandoned and condemned contrasting with an amazing range of stunning modern architecture.

We were attending a conference at the 5 star China World Hotel and staying at the adjacent 4 star Traders Hotel. My room overlooked the beautiful gardens between the two hotels. Linking the two hotels beneath the gardens was the vast underground China World Mall, complete with a skating rink in its centre. It was filled with shops to meet your every need and a very upmarket food hall catering for almost every taste. There was no need to go outside this self-contained world which, in a city with very cold winters and very hot summers, could be a very good thing. For me it conjured the words ‘grand and bland’: clean, shiny and very upmarket with all the well-known global brands represented. This made finding our way to the conference hall somewhat easier: take the escalator down and turn left at the skating rink, go straight until you reach Jimmy Choo, take the escalator up and turn right at Dior… 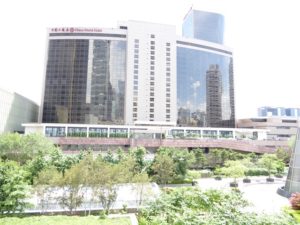 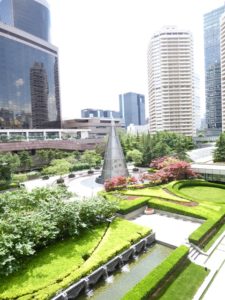 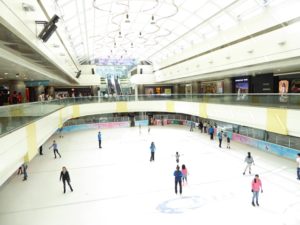 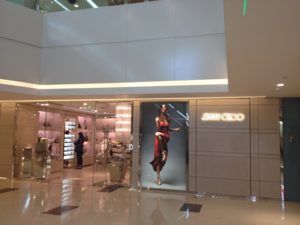 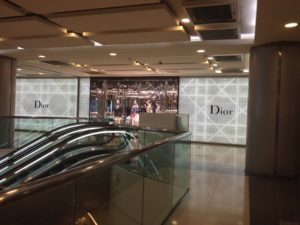 Up the escalator and turn right at Dior

For most of the conference this was our world, cloistered in finery: our welcome reception in the Grand Ballroom dripping with glittery chandeliers and mirrors. Breakfast was provided outside the Conference Hall, which equally grand and easily accommodated the 500 delegates. Our first keynote speaker was a judge from the Supreme People’s Court of China. We briefly escaped our cloistered world to walk along the street in the evening warmth to the nearby Kerry Hotel which was hosting our Cultural Night reception and dinner. And cultural night it certainly was: whilst we talked with fellow delegates from all around the globe we were shown a range of Chinese cultural activities including the pouring of white tea, painting of masks and making of tiny figures out of modelling clay. We were then treated to a banquet meal of all sorts of Chinese delicacies. I followed the advice of the Chinese man I had spoken to on the plane “eat first, ask later” but most of the delicious dishes were things I had eaten and enjoyed previously in New Zealand. The only surprising dish I tried was jellyfish – who knew it could be crunchy! While we ate we were entertained by 4 lovely women playing traditional Chinese instruments, a Chinese opera performance, a Tai Chi demonstration (beautiful excluding the audience participation) and some traditional Chinese songs. 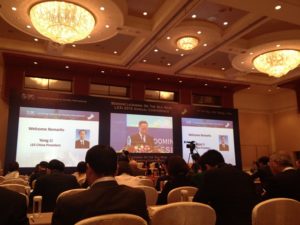 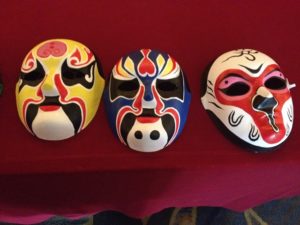 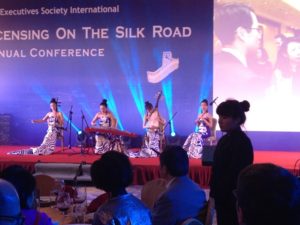 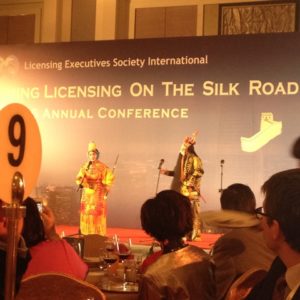 My colleague Liverpool and I walked home around the block taking a longer route to stretch our legs. We discovered that we could in fact have walked to and from the dinner underground via the China World Mall. I was pleased we didn’t as we would then have missed seeing the amazing two-legged CCTV building lit up at night. I was a bit surprised to receive txt messages then in Chinese offering to find me ladies for the evening. As we entered our hotel we were surprised to see security scanning equipment at all the entrances and there is a note in our rooms to say that “Traders Hotel, Beijing has been mandated by the Beijing Public Security Bureau to heighten security measures in the hotel from 10:00am on 17 May to midnight on 21 May, 2016. In addition to metal detectors, all hotel guests’ luggage and personal belongs will be undergoing security machine checks, upon entry to the hotel”. 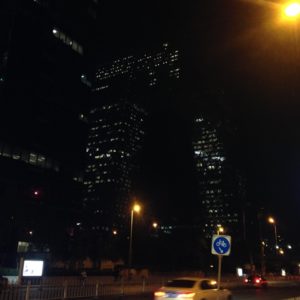 CCTV Building lit up at night 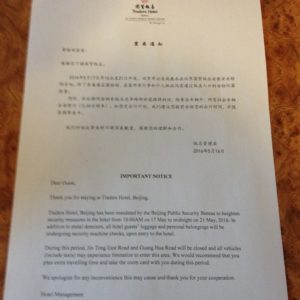 It is extremely dry in Beijing – very different from the humidity in Auckland – and I seem to be constantly drinking, litres and litres of water and still feeling dry. Liverpool and I got zapped with an electric charge when our elbows touched on an escalator.

I am very impressed with the free WiFi almost everywhere and very easy to access (if a little slow at times). Of course there is the Great Firewall of China to contend with and access to many familiar tools such as Google and Facebook is blocked. I discovered that Safari uses Google as well. Bing is okay although most of the results it produces are in Chinese. If you know the url of the site you are interested in, you can usually get it but I was warned that this could be blocked at any time as well.

Smoking has been banned inside everywhere in Beijing which is a very pleasant surprise for me, and so far I have seen very few people smoking outside either.